Karan Bajaj is an Indian technology entrepreneur and author. He is best known as founder and CEO of Edtech company WhiteHat Jr., which was acquired by BYJU'S in 2020. 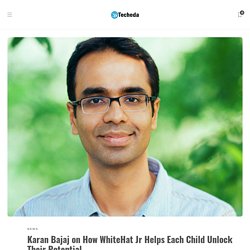 WhiteHat Jr works to teach kids the ins and outs of coding, setting them up for an exciting future no matter what field of study they choose later in life. Coding doesn’t just teach kids how to code; it also teaches them persistence, perseverance, and new ways of thinking about problems. Meet Karan Bajaj, the Bestselling Author and Entrepreneur Helping Kids Realize Their Full Potential. A noted author, entrepreneur and business leader, Karan Bajaj knows that children are everyone’s future, and providing them with an opportunity is imperative for building a better future. 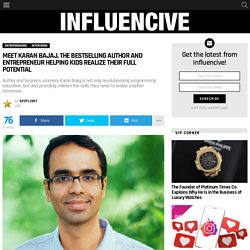 To that end, Bajaj believes that giving kids an early start in the world of coding can not only inspire confidence in the newest generation, but also help young people develop the skills and tech acumen essential to creating a better future for countries, societies and people throughout the globe. It was with this thought that Bajaj established Whitehat Jr., a startup designed to empower kids through coding education and provide children the opportunity to see themselves as builders and artists from a young age. WhiteHat Jr Expands Product Bouquet, Launches ‘Create with Math’ Curriculum - Pragativadi.

'Trying to build everything on your own is where most companies slow down': WhiteHat Jr's Karan Bajaj. Historically, growth-stage businesses have faced the build-versus-buy question. 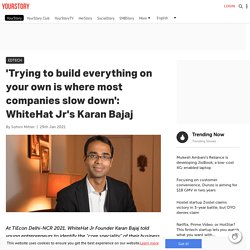 While 'product-first' companies take pride in building every new tool, feature, vertical, and so on by themselves, several others either take the 'buy' route or simply, partner. That's what coding startup WhiteHat Jr did to become a $150 million revenue run rate company in just 18 months before it got acquired by BYJU'S for $300 million. "Trying to create everything on your own is where most companies slow down and are not able to scale," WhiteHat Jr Founder Karan Bajaj said at Resurgence TiEcon Delhi-NCR 2021. WhiteHat Jr always knew what it was good at and what the platform's "core speciality" was. "We knew we were good at creating a curriculum, pooling and supplying high quality teaching talent, and had the ability to connect them with students using a complex scheduling algorithm... that is the core speciality we built," he explained. 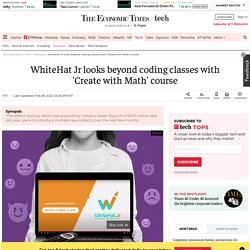 The edtech startup, which was acquired by industry leader Byju's in a $300 million deal last year, plans to introduce multiple new subjects over the next few months. Founded in November 2018, WhiteHat Jr helps kids build commercial-ready games, animations and apps online using the fundamentals of coding. Currently, its 11,000 strong women-only teacher workforce from India, conducts more than 40,000 1:1 live online classes every day on its proprietary platform. Till date, it has taught more than 1.75 lakh students across the globe, including in India, the United States, the United Kingdom, Australia and New Zealand. 11-year-old WhiteHat Jr Student from Kolkata Certified as a Microsoft Technology Associate India.

More News 08 Mar 2021 | 1:26 PM Imphal, Mar 8 (UNI) 'I rise', a 52 minute documentary on the life of World boxing Champion, Laishram Sarita by Borun Thokchom, painstakingly made after five years of research and filming is a living testimony of a struggle of a village girl to reach the pinnacle in a mentally and physically challenging sport , boxing. see more.. 08 Mar 2021 | 1:20 PM Kolkata, Mar 8 (UNI) West Bengal Chief Minister and Trinamool Congress (TMC) supremo Mamata Banerjee will face a tough contest in the state assembly election against Suvendu Adhikari, her former top aide who defected to the BJP in December, in high-profile Nandigram seat of East Medinipur district. 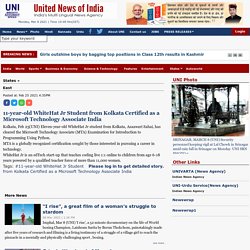 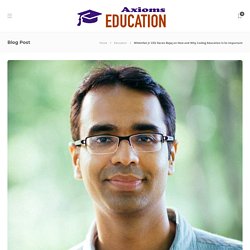 According to CEO Karan Bajaj, starting kids with coding at an early age doesn’t just teach them what they need to know about computer programming. Wonder kids. From a 16-year-old Agra-based entrepreneur to a 14-year-old who has travelled to 24 countries to an eight-year-old who has developed a mobile app to help identify everyday objects, there is no bound to young talent. 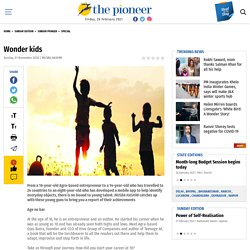 MUSBA HASHMI catches up with these young guns to bring you a report of their achievements Age no bar At the age of 16, he is an entrepreneur and an author. He started his career when he was as young as 10 and has already seen both highs and lows. Meet Agra-based Ojas Batra, Founder and CEO of Hive Group of Companies and author of Teenage AF, a book that will be the torchbearer to all the readers out there and help them to adapt, improvise and step forth in life. Take us through your journey. Venkat Raman Patnaik: 7 Year Old Boy Who Passes Microsoft Mta Exam - कामयाबी! 7 साल के वेंकट रमन ने पास की माईक्रोसॉफ्ट परीक्षा, मिला 'वंडर किड' का खिताब. Children are innovating, learning to code and solve real-world problems. Demo day events are usually organised for technologists and start-up founders to pitch their innovations to investors, in the hope of securing investment or validation. 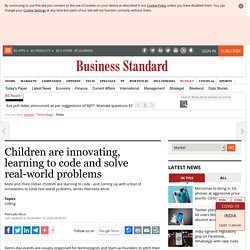 But something unusual happened this month when 26 children (some as young as seven) from across India pitched their innovations — including apps that they had coded to solve real-world problems — to a team of Silicon Valley venture capitalists and entrepreneurs. Anti-bullying apps for children for protection against harassment at school, trackers for patients to book hospital beds and apps that help ... Key stories on business-standard.com are available to premium subscribers only. Already a premium subscriber? LOGIN NOW. 7-yr-old Odisha boy clears 5 Microsoft Associate exams. A seven-year-old boy of Balangir district has achieved a rare feat by clearing as many as five Microsoft Technology Associate (MTA) examinations. 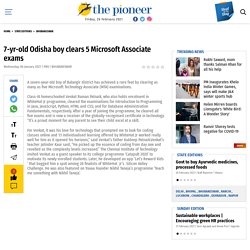 Class-III homeschooled Venkat Raman Patnaik, who also holds enrolment in WhiteHat Jr programme, cleared the examinations for Introduction to Programming in Java, JavaScript, Python, HTML and CSS; and for Database Administration Fundamentals, respectively. After a year of joining the programme, he cleared all five exams and is now a receiver of the globally-recognised certificate in technology. “It’s a proud moment for any parent to see their child excel at a skill. For Venkat, it was his love for technology that prompted me to look for coding classes online and 1:1 individualised learning offered by WhiteHat Jr worked really well for him as it opened his horizons,” said Venkat’s father Kuldeep Patnaik.Venkat’s teacher Jatinder Kaur said, “He picked up the essence of coding from day one and revelled as the complexity levels increased.”

WhiteHat Jr young coders changing world; demonstrate mobile app solutions. Have you ever wondered who are creating all those cool and useful mobile applications you have been using for daily purposes? 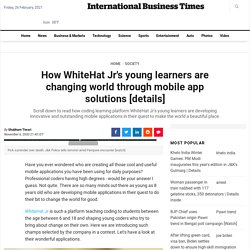 Professional coders having high degrees - would be your answer I guess. Not quite. There are so many minds out there as young as 8 years old who are developing mobile applications in their quest to do their bit to change the world for good. WhiteHat Jr is such a platform teaching coding to students between the age between 6 and 18 and shaping young coders who try to bring about change on their own. Here we are introducing such champs selected by the company in a contest. Neil Malhotra, creator of Clean Quest app Neil is a student of class 8 in a school in Arizona, United States. "Clean Quest enables people to report pollution problems to local authorities at a single click. WhiteHat Jr’s campaign celebrates real kids building real things. Mumbai-based edtech startup, WhiteHat Jr, has gone a long way to refresh its promotional efforts which are now centered on real kids building real apps.

The brand is currently running campaigns, i#RealKidsOfWHJr and #YoungAchieversOfWHJr, which demonstrate the real-world applications of coding. The campaigns, which feature students sharing their experiences as creators, also underscores the need to #LearnToCode. A deeper dive into the brand’s advertising provides interesting insights.

Also joining the Mumbai-based company’s cap table is Owl Ventures, the Menlo Park-based, ed-tech-focused investment firm. This is the second ed-tech bet placed by Owl Ventures in India in the last three months, having earlier participated in market leader Byju’s $150 million equity financing round, alongside Qatar Investment Authority in July. [YS Learn] How WhiteHat Jr got its first cheque of $1.3M and how it found a $300M exit with BYJU’S. The journey of WhiteHat Jr is unique.

The startup has been in the news ever since edtech unicorn BYJU’S acquired it for $300 million. Founded in 2018 by former Discovery Networks CEO Karan Bajaj, WhiteHat Jr offers AI courses to children aged six to 14 years. The Mumbai-based edtech startup aims to empower children so that they view themselves as creators. WhiteHat Jr has been revenue positive, with 84 percent teachers under the age of 35 who are earning between Rs 50,000 and Rs 1.5 lakh a month.

The ongoing ramp-up is to match the growing base of students across multiple countries including India, the US, Canada, the UK, Australia, and New Zealand. Karan had started with initial funding of $1.3 million from Nexus Venture Partners and Omidyar Network India. “In my case, I think the convention was broken a little bit. Looking beyond convention When Karan approached the investors to raise over a million dollars, they were a little surprised that he was pitching without a working product. Autobiography of a multimillionaire yogi: The incredible journey and contrarian ideas of Karan Bajaj. We Both Have The View That An Indian EdTech Product Can Go Across The world Karan Bajaj CEO of Discovery Networksand entrepreneur. A novelist,meditation motivator,a former CEO of Discovery Networksand entrepreneur, Karan Bajaj, dwells in a multi-dimensional world.The Founder and CEO of the coding coaching platform White Hat Jr., recently entered into a partnership with Byju’s.

In an exclusive conversation with BW Businessworld Chairman and Editor-in-Chief, Annurag Batra, Bajaj says the unique product he had developed could achieve the scaling model of Uber. Read on for an insight into this unique personality’s mind as he holds forth on the Ed Tech space in India, success, failure and entrepreneurship. Excerpts: How have the last 150 days been? Karan Bajaj: A Yogi to a Millionaire - Gyanalogy. Interaction-with-karan-bajaj-founder-of-the-coding-platform-white-head-junior-which-is-becoming-very-popular-among-children-127939922.