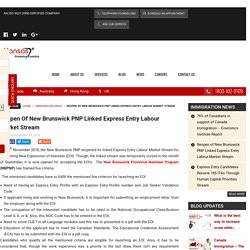 Though, the linked stream was temporarily closed in the month of September, it is now opened for accepting the EOI’s. The New Brunswick Provincial Nominee Program (NBPNP) has framed five criteria. Express Entry Candidates Receive 185 ITAs Through Human Capital Priorities Stream. According to the report, the Express Entry-linked Ontario’s Human Capital Priorities Stream held a draw on 26th November 2018 and issued 185 ITAs for permanent residency to Express Entry candidates. 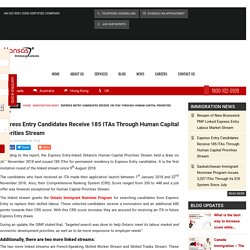 It is the first invitation round of the linked stream since 9th August 2018. The candidates who have received an ITA made their application launch between 1st January 2018 and 22nd November 2018. Also, their Comprehensive Ranking System (CRS) Score ranged from 350 to 448 and a job offer was however exceptional for Human Capital Priorities Stream. What is the best way to increase score while applying Canada PR with Spouse? Saskatchewan Immigrant Nominee Program Issues 3,337 ITAs. New Invitations to Apply (ITA) for Saskatchewan Immigrant Nominee Program (SINP) have been issued to International Skilled Worker Immigration Category candidates on 23rd November 2018, by the Saskatchewan province. 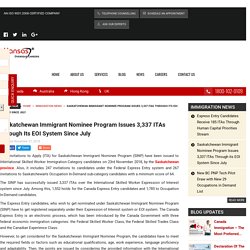 Also, it includes 247 invitations to candidates under the Federal Express Entry system and 267 invitations to Saskatchewan’s Occupation In-Demand sub-category candidates with a minimum score of 64. The SINP has successfully issued 3,337 ITAs over the International Skilled Worker Expression of Interest system since July. Among this, 1,552 holds for the Canada Express Entry candidates and 1,785 to Occupation In-Demand candidates. The Express Entry candidates, who wish to get nominated under Saskatchewan Immigrant Nominee Program (SINP) have to get registered separately under their Expression of Interest system or EOI system.

Desire To Study Abroad - Analyze The Parameters To Get Study Abroad Scholarships. New BC PNP Tech Pilot Draw With New 29 Occupations In Demand List. According to the recent updates, the British Columbia has provided Invitations to Apply to candidates listed under the 29 targeted occupations through the BC PNP Tech Pilot draw on 24th November 2018. 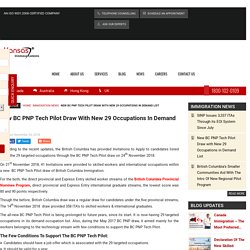 On 21st November 2018, 41 Invitations were provided to skilled workers and international occupations within a new BC PNP Tech Pilot draw of British Columbia Immigration. For the both, the direct provincial and Express Entry skilled worker streams of the British Columbia Provincial Nominee Program, direct provincial and Express Entry international graduate streams, the lowest score was 80 and 90 points respectively. Though the before, British Columbia draw was a regular draw for candidates under the five provincial streams, The 14th November 2018 draw provided 358 ITA’s to skilled workers & international graduates. The all-new BC PNP Tech Pilot is being prolonged to future years, since its start. It is now having 29 targeted occupations in its demand occupation list. Canada Immigration – The Most Preferred Nation To Settle For Their International Students. Canada is successfully attracting its international students to apply for Canadian Permanent Residency. 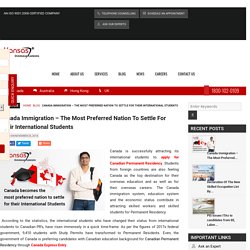 Students from foreign countries are also feeling Canada as the top destination for their overseas education and as well as for their overseas careers. The Canada immigration system, education system and the economic status contribute in attracting skilled workers and skilled students for Permanent Residency. According to the statistics, the international students who have changed their status from international students to Canadian PR’s, have risen immensely in a quick time-frame. As per the figures of 2017s federal government, 9,410 students with Study Permits have transformed to Permanent Residents. British Columbia’s Smaller Communities Aid With The Intro Of New Regional Pilot Program.

Manitoba To Open Huge Openings For Its Labour Market 2018-2024. Based on the new labor market outlook of the provincial government, it is expected that for Manitoba’s labor market the immigrants will be playing a crucial role in the upcoming years. 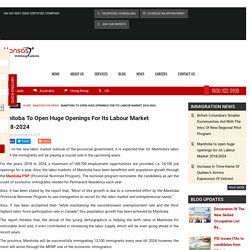 For the years, 2018 to 2024, a maximum of 168,700 employment opportunities are provided, i.e. 24,100 job openings for a year. Also, the labor markets of Manitoba have been benefitted with population growth through the Manitoba PNP (Provincial Nominee Program). The nominee program nominates the candidates as per the count of economic immigrants needed for Permanent Residency each year. Also, it has been stated by the report that, “Most of this growth is due to a concerted effort by the Manitoba Provincial Nominee Program to use immigration to recruit for the labor market and entrepreneurial needs,”. Also, it has been acclaimed that, “while maintaining the second-lowest unemployment rate and the third-highest labor force participation rate in Canada”, this population growth has been achieved by Manitoba.

Saskatchewan PNP: A Boon to Candidates with Low IELTS for Canada PR. Canada is one of the successful country with leading development opportunities to its people. 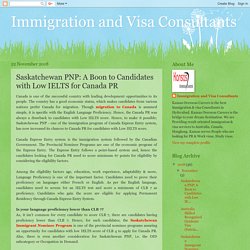 The country has a good economic status, which makes candidates from various nations prefer Canada for migration. Though migration to Canada is assumed simple, it is specific with the English Language Proficiency. Hence, the Canada PR was always a drawback to candidates with Low IELTS score. Hence, to make it possible; Saskatchewan PNP - one of the immigration program of Canada Express Entry system, has now increased its chances to Canada PR for candidates with Low IELTS score.

Increase In Time-Frame Of Quebec’s Arrima Expression Of Interest. As per the report derived from the Government of Quebec, the applicants who have initiated their profile with Quebec immigration will have a time period of Ninety (90) days to submit their complete Arrima Expression of Interest. 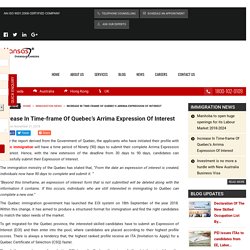 Hence, with the new extension of the deadline from 30 days to 90 days, candidates can successfully submit their Expression of Interest. The immigration ministry of the Quebec has stated that, “From the date an expression of interest is created, individuals now have 90 days to complete and submit it. “ “Beyond this timeframe, an expression of interest form that is not submitted will be deleted along with the information it contains. Declaration Of The New Skilled Occupation List By The ACT. There has been a new SOL (Skilled Occupation List) announcement for Australian Permanent Residency declared by the ACT or Australian Capital Territory. 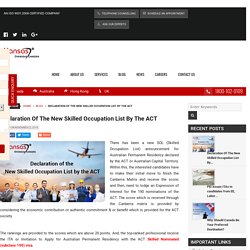 Within this, the interested candidates have to make their initial move to finish the Canberra Matrix and receive the score; and then, need to lodge an Expression of Interest for the 190 nominations of the ACT. The score which is received through the Canberra matrix is provided by considering the economic contribution or authentic commitment & or benefit which is provided for the ACT society. Investment Is No More A Hurdle With New Australia Business Visa. In order to boost up the South Australia’s economy, a new and special visa has been made available for a 3 years’ timeframe by the Australia government. 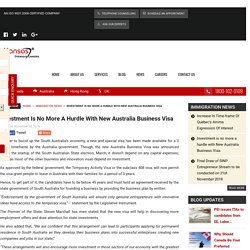 Though, the new Australia Business Visa was announced during the startup of the South Australian State election, March; it doesn’t depend on any capital expenses; whereas most of the other business and innovation visas depend on investment. PEI Issues ITAs To Candidates From EE, Labor Impact & Business Impact Categories. The Prince Edward Island PNP has issued a total of 147 Invitations to Apply (ITA) to candidates belonging to Express Entry and Labor Impact category. Australia Skilled Recognized Graduate Visa (Subclass 476 Visa) & Its Factors to Know. Australia, the well-known nation for skill advancements and developments is one of the most common search by foreign candidates. Candidates from varied nations prefer Australia to move on with its abundant career opportunities.

The skill requirement is not terminated to one occupation, there are many which constitute to the country’s economic development. Final Draw Of SINP Entrepreneur Stream To Be Conducted On 21st November 2018. According to the sources, the Saskatchewan Immigrant Nominee Program (SINP) declares its last round of the Entrepreneur Stream draw for 2018 on 21st November 2018. Hence, it insists the interested applicants to provide their Expression of Interest as early as possible. However, candidates who are in plan to institute their own business under the Saskatchewan Entrepreneur Stream should be on a temporary work permit. Also, applicants who successfully get their business set up will receive a nomination for Canada PR with regards to the agreements.

Before, the province’s draws were conducted with an interval of three months, but now they are taking place with an interval of two months. New Nova Scotia Nominee Program For Express Candidates With No Job Offer. As per the announcement of the Nova Scotia Nominee Program (PNP), the program will be accepting new applications of approximately. 225 within its Nova Scotia Demand: Express Entry Category B, on 17th November 2018. Why Should Canada Be Your Preferred Destination? Still No Conclusion On 2019-2020 Australia PR Intakes – Report Concludes.

During an approach with SBS News, David Coleman, the Immigration Minister has stated that the government of Australia have not made any choice still, on the count of Australia PR acceptance for the coming year – 2019-2020. Immigration and Visa Consultants: Saskatchewan Immigrant Nominee Program (SINP) - Canada Permanent Residency Visa is Easiest Pathway. October 2018 Express Entry Rounds Near Up 2017’S ITA Record. Re-Open Of Skilled Nominated Visa Program To Benefit Skilled Professionals. According to the recent changes, the Government of Australian Capital Territory (ACT) is going to re-introduce its Skilled Migration State Nomination Program on 29th November of this year. Ontario Immigrant Nominee Program Issues 6600 Invites In 2018. Understanding Canada Comprehensive Ranking System(CRS) Understanding Australia Business Visa. Who can apply for Australia Business Visa? Australia is an immigration-friendly nation and it is known to have a prosperous economy.

Canada Has Introduced Improved Provincial Pathways To Ease Immigration. You Can Migrate To Canada Without An Employment Offer. How To Enroll For Australia Student Visa? Canada Eases Pathway For Techies Amid US Toughening The Process For H1B Visas. 5 Major Requirements To Examine Prior To Applying For Australia PR. Plan For Australia Working Holiday Visa - Apply For Subclass 417 To Stay And Work In Australia. US Draft Proposal Would Restrict Low Income Immigrants. Amid US Immigration Tension, Canadian Jobs Have Become More Attractive To Indians. How Do I Apply For A Canada Federal Skilled Worker Visa Through Express Entry System? UK PM: After Brexit, High Priority Will Be Given For Skilled Immigration. In Last 20 Years, Manitoba Welcomes Above 130,000 Immigrants Under MPNP. Why Quebec Is Sought After Destination Among The Aspirant Immigrants.