The Secret UX Issues That Will Make (Or Break) Self-Driving Cars. Color Extractor. CREDITS2015 Made with by Skuawk. 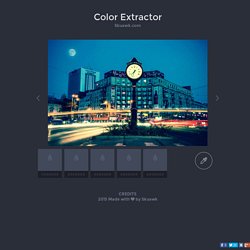 How riot rumours spread on Twitter. Apple Finally Learns AI Is The New UI. "Most people make the mistake of thinking design is what it looks like," Steve Jobs once said. 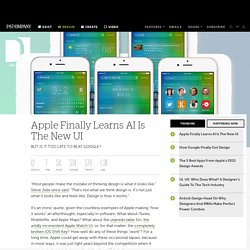 "That's not what we think design is. It's not just what it looks like and feels like. Design is how it works. " It's an ironic quote, given the countless examples of Apple making "how it works" an afterthought, especially in software. What about iTunes, MobileMe, and Apple Maps? How things change. What's important about these developments? Here's the truth: while Apple's industrial design remains best-in-class, it is no longer at the top of the heap when it comes to digital UI or UX. That's a hard pill to swallow for some. The thing is, Google knew something we didn't. At this year's I/0 2015 conference, Google announced Now On Tap, the next-gen version of its Google Now digital assistant, which can contextually improve how you experience apps using machine learning and deep linking. 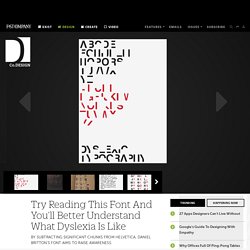 But it can raise awareness. In his last year as a student at the London School of Communications, designer Daniel Britton was diagnosed with dyslexia. When Britton told his classmates and teachers about his diagnosis though, they just stared at him. They thought he was stupid. They thought he was lazy. So Britton decided to show them how it felt to be dyslexic. That 40% isn't scientific: Britton admits that dyslexics don't necessarily have a 40% diminished ability to read than normal.

According to Britton, he's not trying to recreate the visual experience of dyslexia, which he thinks is ridiculously mischaracterized in the media. And Britton thinks he's been successful in trying to convey what the learning disability is like. Britton's font didn't just make his friends and classmates better understand his condition. "My professor turned out to know someone in Parliament who oversaw the local commission on raising dyslexia awareness," Britton says. 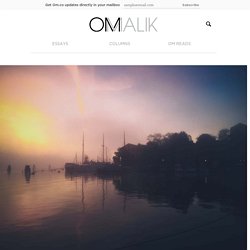 Photos are the atomic unit of social platforms. Photos and visuals are the common language of the Internet. It is hardly a surprise then, that we are going to upload nearly 900 billion photos to the Internet this year. Or that, Snapchat is worth tens-of-billions of dollars. I started taking pictures when I signed up for Instagram. At that time I didn’t understand the value of emotions involved with pictures. Though the memories from my childhood, teenage years and even college years are vivid, tacit and real, only some of them have pictures.

When I started using Instagram, I realized that beyond being pictures, these images are also a daily diary of how I am feeling and what I am looking at. One of my nieces keeps Snapchat open and essentially shares every few minutes; she pointed out that with her generation, there is a much lower barrier to Snapshotting and sharing pictures. The History of Flat Design: Efficiency, Minimalism, Trendiness. It seems as though any time you hear about Web design these days, you can’t help but come across the term “flat design.” 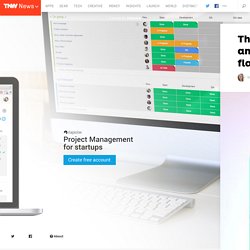 While the flat Web design trend has been emerging in recent years, it seemed to have exploded in popularity thanks to large companies and organizations changing their design aesthetic to that of flat design. But where did flat design come from? And why are we seeing it on the Web? Hamburger vs Menu: The Final AB Test. In case you missed this post about an AB test on mobile menu icons, make sure you check out the comments. 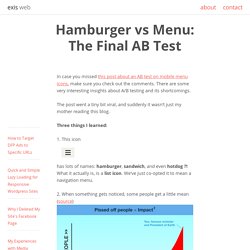 There are some very interesting insights about A/B testing and its shortcomings. The post went a tiny bit viral, and suddenly it wasn’t just my mother reading this blog. Three things I learned: 1. This icon has lots of names: hamburger, sandwich, and even hotdog ?! 2. 3. Thanks for the vote of no-confidence. In this hyper-connected world full of rockstar developers and super-smart designers, I’m humbled on a minute-by-minute basis. The Final Hamburger A/B Test I do enjoy A/B testing, but conclude what you want. Using a commercial A/B testing service can get very expensive very quickly, and well beyond the budgets of small-time web designers and developers.