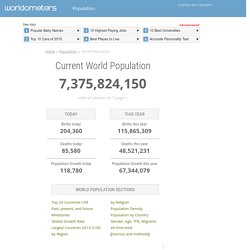 World Population: Past, Present, and Future (move and expand the bar at the bottom of the chart to navigate through time) The chart above illustrates how world population has changed in history. At the dawn of agriculture, about 8000 B.C., the population of the world was approximately 5 million. Over the 8,000-year period up to 1 A.D. it grew to 200 million (some estimate 300 million or even 600, suggesting how imprecise population estimates of early historical periods can be), with a growth rate of under 0.05% per year. 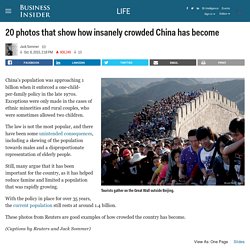 China's population was approaching 1 billion when it enforced a one-child-per-family policy in the late 1970s. Exceptions were only made in the cases of ethnic minorities and rural couples, who were sometimes allowed two children. The law is not the most popular, and there have been some unintended consequences, including a skewing of the population towards males and a disproportionate representation of elderly people. Still, many argue that it has been important for the country, as it has helped reduce famine and limited a population that was rapidly growing.

With the policy in place for over 35 years, the current population still rests at around 1.4 billion. These photos from Reuters are good examples of how crowded the country has become. Pea Pod Containing Peas Close Up Bildbanksbilder. Agoraphobia. Agoraphobia (from Greek αγορά, "gathering place"; and φόβος, φοβία, -phobia) is an anxiety disorder characterized by anxiety in situations where the sufferer perceives certain environments as dangerous or uncomfortable, often due to the environment's vast openness or crowdedness. 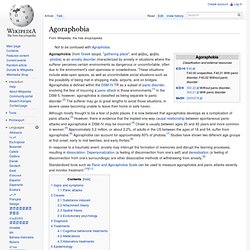 These situations include wide-open spaces, as well as uncontrollable social situations such as the possibility of being met in shopping malls, airports, and on bridges. Agoraphobia is defined within the DSM-IV TR as a subset of panic disorder, involving the fear of incurring a panic attack in those environments.[1] In the DSM-5, however, agoraphobia is classified as being separate to panic disorder.[2] The sufferer may go to great lengths to avoid those situations, in severe cases becoming unable to leave their home or safe haven. Standardized tools such as Panic and Agoraphobia Scale can be used to measure agoraphobia and panic attacks severity and monitor treatment.[10][11] Signs and symptoms[edit] Causes[edit]

Anthropophobia. Not to be confused with anthophobia, the fear of flowers. 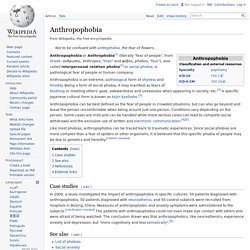 Anthropophobia or Anthrophobia[1] (literally "fear of people", from Greek: άνθρωπος, ánthropos, "man" and φόβος, phóbos, "fear"), also called interpersonal relation phobia[1] or social phobia, is pathological fear of people or human company. Anthropophobia is an extreme, pathological form of shyness and timidity. Being a form of social phobia, it may manifest as fears of blushing or meeting others' gaze, awkwardness and uneasiness when appearing in society, etc.[2] A specific Japanese cultural form is known as taijin kyofusho.[3] Anthropophobia can be best defined as the fear of people in crowded situations, but can also go beyond and leave the person uncomfortable when being around just one person.

Conditions vary depending on the person. Like most phobias, anthropophobia can be traced back to traumatic experiences. Case studies[edit] See also[edit] References[edit] External links[edit] Gallery: The (much less crowded) streets of Shanghai in 1985: Shanghaiist. The Bund in 1985 A set of photos from 1985 shows an astonishingly less crowded Shanghai than the city we know and love today. 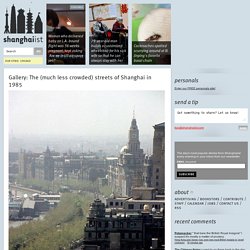 Note specifically the differences at popular tourist spots like the Bund, Huaihai Road (now Shanghai's most luxurious and bustling shopping street) and Nanjing Road. Take a deep breath, relax and take a journey back to the not-too-distant past. As a locally known poem written by unknown Shanghainese goes: LOOK: Exhibition unveils rare photos of old Shanghai: Shanghaiist. The Shanghai Municipal Archives is currently exhibiting rare photos of our favorite city in its younger years. 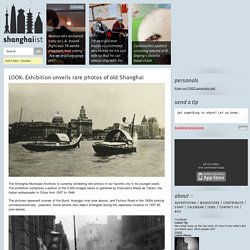 The exhibition comprises a portion of the 3,000 images taken or gathered by Francesco Maria de Taliani, the Italian ambassador in China from 1937 to 1946. The pictures represent scenes of the Bund, Huangpu river (see above), and Fuzhou Road in the 1920s looking uncharacteristically...peaceful. Some photos also depict Shanghai during the Japanese invasion of 1937-45 (see below). Armed Notebooks. Flux Bible. Smartphone Notebook. World’s First 3D-Printed Book Cover – Fubiz Media.