CER MitosisMeiosis Final Draft. NSTA: C.E.R. FA: Is It Evidence? FA: Is It a Claim? Claim Evidence Reasoning. By far, the biggest shift in my teaching from year 1 to year 7 has been how much emphasis I now place on evaluating evidence and making evidence-based claims. 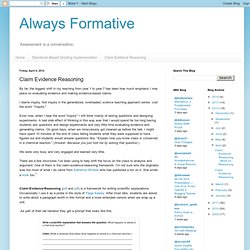 I blame inquiry. Not inquiry in the generalized, overloaded, science teaching approach sense. Just the word. "Inquiry. " Even now, when I hear the word "inquiry" I still think mainly of asking questions and designing experiments. We were very busy and very engaged and learned very little. There are a few structures I've been using to help shift the focus on the class to analysis and argument. Claim-Evidence-Reasoning (pdf and pdf) is a framework for writing scientific explanations. As part of their lab handout they get a prompt that looks like this: As the year goes on I remove most of the scaffolds until ultimately the students just get a prompt or question.

I've been happy with it. I like frameworks a lot. The key to implementation is that the structure of the class really has to be designed around C-E-R. Scientific Writing Scaffolds. As a department we've been working on different writing scaffolds. 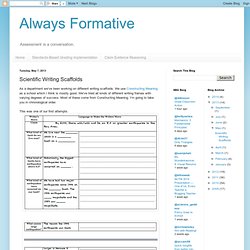 We use Constructing Meaning as a school which I think is mostly good. We've tried all kinds of different writing frames with varying degrees of success. Most of these come from Constructing Meaning. I'm going to take you in chronological order. This was one of our first attempts. It was our sixth graders' first or second try at extended science writing. We pulled two main lessons from this. C.E.R. Rubric. Designing Science Inquiry: Claim + Evidence + Reasoning = Explanation. In an interview with students, MIT's Kerry Emmanuel stated, "At the end of the day, it's just raw curiosity. 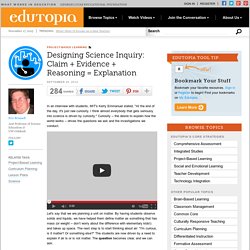 I think almost everybody that gets seriously into science is driven by curiosity. " Curiosity -- the desire to explain how the world works -- drives the questions we ask and the investigations we conduct. Let's say that we are planning a unit on matter. By having students observe solids and liquids, we have helped them define matter as something that has mass (or weight -- don’t worry about the difference with elementary kids!) And takes up space. Is air matter? Next, we can ask our students what data they need to answer the question, and how they can collect that data -- how they can investigate. According to the CER model, an explanation consists of: Supporting C.E.R. across grade levels. Claim-Evidence-Reasoning. Claims evidence and reasoning presentation.

FA: Is it a Scientific Explanation? Scientific Synopsis - Writing Center - The University of Oklahoma. First a little background… This is by no means a comprehensive guide. 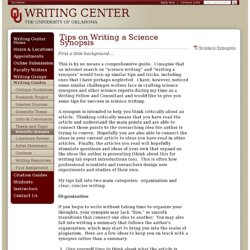 I imagine that an internet search on “science writing” and “writing a synopsis” would turn up similar tips and tricks, including ones that I have perhaps neglected. I have, however, noticed some similar challenges writers face in crafting science synopses and other science reports during my time as a Writing Fellow and Consultant and would like to give you some tips for success in science writing. A synopsis is intended to help you think critically about an article. Thinking critically means that you have read the article and understand the main points and are able to connect those points to the overarching idea the author is trying to convey. My tips fall into two main categories: organization and clear, concise writing. Organization If you begin to write without taking time to organize your thoughts, your synopsis may lack “flow,” or smooth transitions that connect one idea to another. CERWriting. Learningcenter.nsta.org/products/symposia_seminars/NSTA/files/HowDoYouKnowThat.

Claim, Evidence, Reasoning: Tools to Introduce CER in PD and Instruction. I have been digging into Joseph Krajcik and Katherine McNeill’s book- Supporting Grade 5-8 Students in Constructing Explanations in Science- and I highly recommend it to any upper elementary and middle school teacher of science. 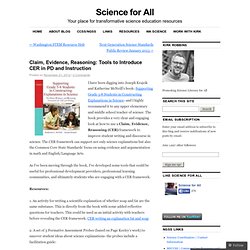 The book provides a very clear and engaging look at how to use a Claim, Evidence, Reasoning (CER) framework to improve student writing and discourse in science. The CER framework can support not only science explanations but also the Common Core State Standards’ focus on using evidence and argumentation in math and English/Language Arts. As I’ve been moving through the book, I’ve developed some tools that could be useful for professional development providers, professional learning communities, and ultimately students who are engaging with a CER framework. Is-it-evidence-fa-probe. Denver Public Schools Language, Literacy, and Cultural Studies. Is-it-a-claim_-fa-probe.