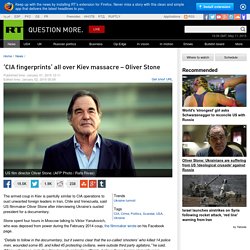 (AFP Photo / Rafa Rivas) The armed coup in Kiev is painfully similar to CIA operations to oust unwanted foreign leaders in Iran, Chile and Venezuela, said US filmmaker Oliver Stone after interviewing Ukraine’s ousted president for a documentary. Stone spent four hours in Moscow talking to Viktor Yanukovich, who was deposed from power during the February 2014 coup, the filmmaker wrote on his Facebook page. “Details to follow in the documentary, but it seems clear that the so-called ‘shooters’ who killed 14 police men, wounded some 85, and killed 45 protesting civilians, were outside third party agitators,” he said. 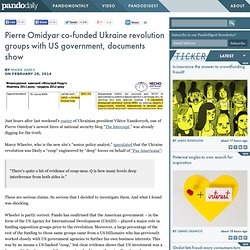 Marcy Wheeler, who is the new site’s “senior policy analyst,” speculated that the Ukraine revolution was likely a “coup” engineered by “deep” forces on behalf of “Pax Americana”: Ukrainian Neo-Nazis Declare that Power Comes Out of the Barrels of their Guns. Reality on the ground in Ukraine contradicts the incompetent and immoral Obama regime’s portrait of Ukrainian democracy on the march. 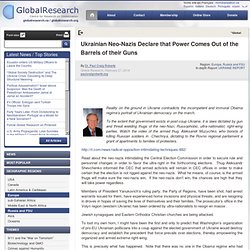 To the extent that government exists in post-coup Ukraine, it is laws dictated by gun and threat wielding thugs of the neo-Nazi, Russophobic, ultra-nationalist, right-wing parties. Watch the video of the armed thug, Aleksandr Muzychko, who boosts of killing Russian soldiers in Chechnya, dictating to the Rovno regional parliament a grant of apartments to families of protesters. McCain: Putin sees Crimea as cold war chessboard - video. Ukrainian Neo-Nazis Declare that Power Comes Out of the Barrels of their Guns. Ukrainian Currency Collapses By 28% Against Gold In 4 Days. Today’s AM fix was USD 1,331.00, EUR 974.81 and GBP 799.88 per ounce. 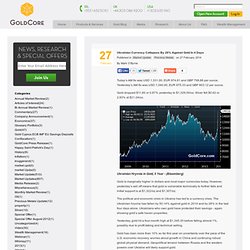 Yesterday’s AM fix was USD 1,340.00, EUR 975.33 and GBP 803.12 per ounce. Gold dropped $11.60 or 0.87% yesterday to $1,329.00/oz. Silver fell $0.62 or 2.83% at $21.24/oz. Ukrainian Hryvnia in Gold, 5 Year - (Bloomberg) Gold is marginally higher in dollars and most major currencies today. The political and economic crisis in Ukraine has led to a currency crisis. Yesterday, gold hit a four-month high at $1,345.35 before falling almost 1%, possibly due to profit taking and technical selling. Ukraine Banks Limiting Cash Withdrawal - Emerging Europe Real Time. Washington's Role in the Ukrainian Coup & How it May Spin Out of Control. Tinkering with the affairs of other nations is a dangerous and unpredictable game. 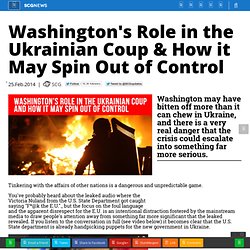 You've probably heard about the leaked audio where the Victoria Nuland from the U.S. State Department got caught saying "F*@k the E.U. "., but the focus on the foul language and the apparent disrespect for the E.U. is an intentional distraction fostered by the mainstream media to draw people's attention away from something far more significant that the leaked revealed. If you listen to the conversation in full (see video below) it becomes clear that the U.S. State department is already handpicking puppets for the new government in Ukraine. Notice how their maneuvers are calculated to prevent Russia from being able to influence the situation. Washington Orchestrated Protests Are Destabilizing Ukraine. Victoria Nuland Admits: US Has Invested $5 Billion In The Development of Ukrainian, "Democratic Institutions"

Victoria Nuland Admits: US Has Invested $5 Billion In The Development of Ukrainian, "Democratic Institutions" International Business Conference at Ukraine in Washington - National Press Club - December 13, 2013 Victoria Nuland - Assistant Secretary of State for Europe and Eurasian Affairs US Assistant Secretary of State for Europe, Nuland said: “Since the declaration of Ukrainian independence in 1991, the United States supported the Ukrainians in the development of democratic institutions and skills in promoting civil society and a good form of government - all that is necessary to achieve the objectives of Ukraine’s European. 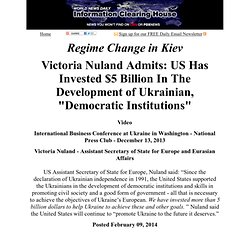 We have invested more than 5 billion dollars to help Ukraine to achieve these and other goals. ” Nuland said the United States will continue to “promote Ukraine to the future it deserves.” Washington's Cloned Female Warmongers By Finian Cunningham February 09, 2014 "Information Clearing House - What is it about America's women diplomats? URGENT: US-NATO War With Russia Over Ukraine. KIEV RIOTS: The Truth About The Ukraine Crisis PAID to PROTEST U S Funded REGIME CHANGE. What is Really Happening in Ukraine? Cutting Through the Propaganda. In the past 48 hours, dozens of people have been killed, hundreds injured, and sections of Ukraine’s capital Kiev are ablaze. 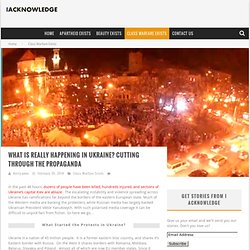