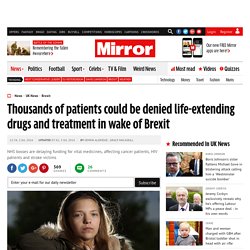 NHS bosses have delayed funding for vital medicines and services because the fall in the value of the pound means they may no longer be able to afford them. And kidney patient Abi Longfellow, the teenager who won her battle for a wonder drug thanks to a Sunday People campaign, is one of those hit by the devastating blow. The cost of Abi’s drug went up by £16,000 overnight due to Brexit . When the NHS first agreed to buy the drug form the US it cost £136,000. But the price has now shot up to £152,000 because the pound has slumped against the dollar. 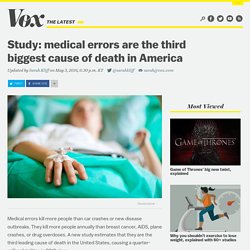 They kill more people annually than breast cancer, AIDS, plane crashes, or drug overdoses. A new study estimates that they are the third leading cause of death in the United States, causing a quarter-million fatalities in 2013 alone. Patient safety researchers Marty Makary and Michael Daniel published new data in the British Medical Journal Tuesday suggesting that preventable medical errors resulted in 251,454 deaths in 2013. 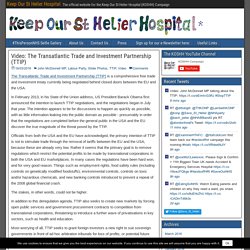 In February 2013, in his State of the Union address, US President Barack Obama first announced the intention to launch TTIP negotiations, and the negotiations began in July that year. The intention appears to be for discussions to happen as quickly as possible, with as little information leaking into the public domain as possible - presumably in order that the negotiations are completed before the general public in the USA and the EU discover the true magnitude of the threat posed by the TTIP.

Private Health Lobbyists Are Funding a Meeting with a Tory Minister. Anti-NHS-privatisation protesters last year in Manchester last year (Photo by Chris Bethell) One of the constants in UK public life is that pretty much everyone loves free healthcare on the NHS. 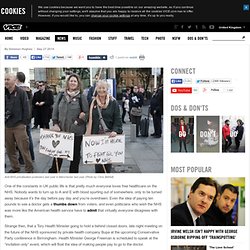 Nobody wants to turn up to A and E with blood spurting out of somewhere, only to be turned away because it’s the day before pay day and you’re overdrawn. The first privatised NHS hospital - success or smoke and mirrors? Image: Smoke and mirrrors. 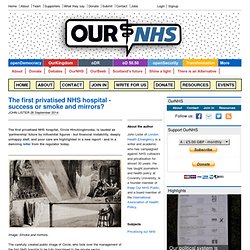 The carefully created public image of Circle, who took over the management of the first NHS hospital to be fully franchised to the private sector, Hinchingbrooke Hospital, is a triumph of PR spin. Reference to the “success” at Hinchingbrooke has become shorthand for any politician or think tank advocating further NHS privatisation. Services at Hinchingbrooke have been transformed, we are told. The results of the new patient satisfaction survey – the controversial “friends and family” question – is enthusiastically quoted, despite the test being heavily criticised by many including NHS England. Behind the smoke and mirrors is a different story. Hinchingbroke was a high performing, successful trust, before it was forced into deficit by the old East of England Strategic Health Authority, paving the way for Hinchingbrooke to be wholly franchised to the private sector. 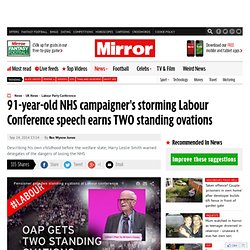 Describing his own childhood in Barnsley, South Yorks, before the welfare state, Harry Leslie Smith warned delegates of the dangers of losing the NHS. “As I stand here today, my heart is with all of those people from my generation who didn’t make it past childhood, didn’t get an education, grow as individuals, marry, raise a family and enjoy the fruits of retirement because they died needlessly and too early in another era of austerity,” he said. “But my heart is also with the people of the present, who, because of welfare cuts and austerity measures, are struggling once more to make ends meet, and whose futures I fear for.” Harry, the Daily Mirror’s special guest at Labour conference, took to the main stage, ahead of Burnham’s big speech on health and social care. Noam Chomsky exclusive: Pope Francis, Oscar Romero and the horror of Reagan foreign policy. Last month an apparently unremarkable series of reports about Pope Francis drifted through the international news carousel, attracting little attention from the national media — though it should have. 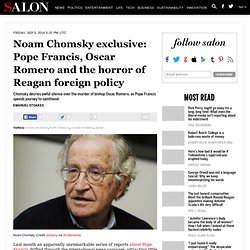 They recorded the pontiff’s desire to expedite a deceased bishop’s journey toward prospective sainthood in accordance with the customs of the faith. The cleric in question was Oscar Romero who, prior to his murder in 1980 by local death squads, held one of the most senior positions in the Catholic church of El Salvador. As some of the coverage mentioned in passing, he was killed not long after after having written to President Carter, appealing to him to halt his support for repressive government forces that were tearing the country apart in their assault on mass movements that opposed their undemocratic rule. Carter never replied; Romero was shot at mass. I wrote to Chomsky to ask him for a statement on these events.

Jeremy Hunt facing election battle with GP Louise Irvine. South West Surrey MP Jeremy Hunt is to be challenged for his seat at the general election next year by one of Britain's top doctors. 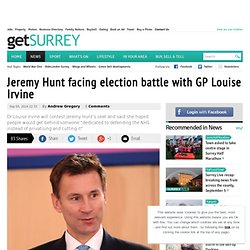 Defending our NHS, investing in our health - The People's Assembly Against Austerity. The final leg of the 999 March for the NHS reaches London on Saturday September 6 and all supporters of the People’s Assembly who can make it are urged to attend. 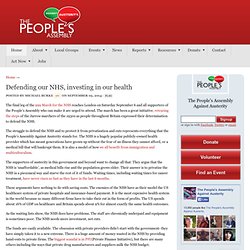 The march has been a great initiative, retracing the steps of the Jarrow marchers of the 1930s as people throughout Britain expressed their determination to defend the NHS. The struggle to defend the NHS and to protect it from privatisation and cuts represents everything that the People’s Assembly Against Austerity stands for. The NHS is a hugely popular publicly-owned health provider which has meant generations have grown up without the fear of an illness they cannot afford, or a medical bill that will bankrupt them. It is also a model of how we all benefit from immigration and multiculturalism. Compilation of Parliamentary Financial Links to Private Healthcare. Lord Sutherland: Non-executive chairman of Scottish Care - now represents the largest group of Health and Social Care independent providers across Scotland, delivering residential care, day care, care at home, and housing support. 68. 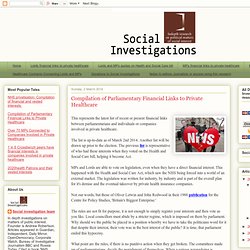 Lord Turnball: Non-Executive Director of Prudential plc, who offer private health insurance. Non-executive Director of Frontier Economics, a consultancy that advises private sector clients on the impact of healthcare reforms and how "to shape regulatory environments". Has shares in Prudential plc. Call for foreign private firms to take over NHS hospitals comes under fire. The ex-Conservative MP who chairs the health service care regulator is under fire after calling for foreign private health firms to be allowed to take over failing NHS hospitals. David Prior, the boss of the Care Quality Commission (CQC), said European or American "hospital chains" should be given the chance to turn around what he said could be as many as 30 NHS hospital trusts in England that have run into trouble by the end of 2014.

That is more than double the 14 trusts that are currently in "special measures" because of problems involving poor care, precarious finances or both. Prior, a former deputy chair and chief executive of the Tory party, acknowledged in remarks to a health seminar in London on Thursday that his suggestion would generate controversy. "I know this won't go down well in some quarters, but actually there are some great continental [European] hospital chains as well, great American hospital chains," he said. The NHS is not “unsustainable” You may have noticed a flurry of articles in the press this week as well as comments by politicians that current NHS spending is “unsustainable”. It has appeared everywhere from an Audit Commission statement to right wing hack Isabel Oakeshott pontificating on BBC Question Time. The sudden popularity of this word in connection with the NHS is interesting and not a little worrying. Why should it happen this week? There have been no big changes in funding plans or expenditure and all the news about the economic growth and financial recovery is good.

It is also strange that Jeremy Hunt has chosen to ignore the spending review body and deny health workers a less than inflation pay rise. What if these two events are connected? REVEALED AT LAST: The Hunt-Bottomley link. His relationship to Virginia Bottomley…..his dealings with the British Council….his inheritance of the SW Surrey constituency….his father’s history in UK Health provision….the Health interests for whom Bottomley now works….his capture of the Health portfolio in the recent reshuffle.

Throughout his career, Jeremy Hunt’s advancement somehow always seemed to involve his path crossing that of the former Virginia Bottomley, known since 2005 as Baroness Nettlestone. Now – with the help of some initial sleuthing by regular Slogger Jackie – I can offer readers a big clue: they are cousins. Laid out below (for anyone with any feeling for the importance of meritocracy) is how still, in 2012, career progress of the type admired by David Cameron – “the leg up” – is alive and well. One where the right tie, who you know, and above all a well-connected family, are all you need to prosper.

Ring any bells? Virginia Bottomley eventually became MP for South West Surrey. Ring any bells? Rate this: i 40 Votes. Guy Gets Sick, Spends Few Hours in Hospital Then This Happens…. Election 2010 Coalition Government : NHS. Election 2010 Coalition Government : NHS The Government believes that the NHS is an important expression of our national values. We are committed to an NHS that is free at the point of use and available to everyone based on need, not the ability to pay. We want to free NHS staff from political micromanagement, increase democratic participation in the NHS and make the NHS more accountable to the patients that it serves.

REVEALED AT LAST: The Hunt-Bottomley link. The destruction of the NHS. I realise that because of my tendency to present lots of facts and conduct rigorous analysis on them, my articles are usually extremely long. Capita awarded £110 million NHS Scotland contract - News - outsourcing - sourcingfocus.com. Monday, February 17, 2014.