Some answers to Owen Jones' questions. Before getting to his questions (which I will attempt to answer later) Owen Jones spends paragraph after paragraph trying to define his stance as being broadly sympathetic to Jeremy Corbyn and his team. 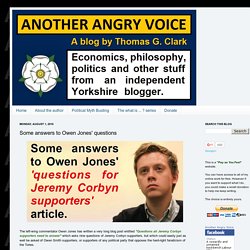 Jeremy Corbyn Plans 'Mandatory Reselection Of MPs' If He Wins Fresh Leadership Mandate. New Labour emerges from hibernation sooner than expected…and unready. By Kit The unwillingness, on behalf of the Labour right, to unite with the rest of the party and attack the Conservatives at a time when they are politically divided and publicly humiliated neatly demonstrates the unacknowledged truth of British democracy – in fact, most Western democracies: We do not have an “opposition”, we do not live in a “two-party system”. 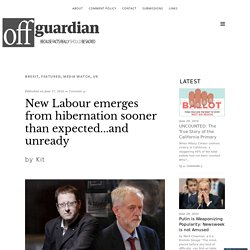 The centre-right Tories and centre-left Blairites are really just two halves of a depraved whole. One large party, that holds a monopoly on power, and kindly lets us choose which colour of tie they wear while they’re in office. George Orwell described the future as “a boot stamping on a human face — forever.” the reality is there are two boots, a left one and a right one, and – every now and then – we get to choose between them. 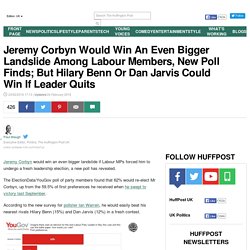 The ElectionData/YouGov poll of party members found that 62% would re-elect Mr Corbyn, up from the 59.5% of first preferences he received when he swept to victory last September. According to the new survey for pollster Ian Warren, he would easily beat his nearest rivals Hilary Benn (15%) and Dan Jarvis (12%) in a fresh contest. But if Mr Corbyn decided not to stand again, a single ‘moderate’ figure like Dan Jarvis could clinch the election against a ‘left’ candidate like Shadow Chancellor John McDonnell, an analysis for HuffPost UK suggests. Former shadow foreign office minister and ex-Paratrooper Dan Jarvis If ‘moderates’ rallied around just a single candidate who had the strong backing of deputy leader Mr Watson and Mr Benn, they could beat Mr McDonnell, the leading ‘left’ figure. For now, however, Mr Corbyn is in a very strong position. 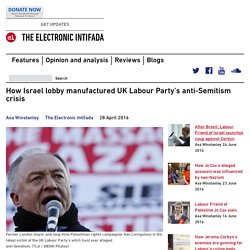 Since then, there has been a steady flow of claims by Israel’s supporters that Corbyn has not done enough to combat anti-Semitism. This has only accelerated in the lead-up to a major test for Corbyn, the UK local elections on 5 May. Even as this story was in preparation, two more victims were claimed in the war against his leadership. Lawmaker Naz Shah and the former mayor of London, long-time Palestine campaigner Ken Livingstone, were also suspended from the party – within hours of being accused of anti-Semitism. How to Fabricate Front Page News - Just Put 16 Selected Right Wing Bigots in a Room - Craig Murray. This is the story of some squalid little men (and women), but it is a vital insight into the nexus of the political and corporate media elite. 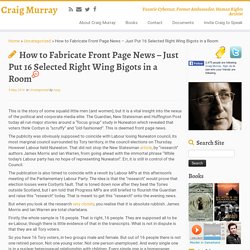 The Guardian, New Statesman and Huffington Post today all run major stories around a “focus group” study in Nuneaton which revealed that voters think Corbyn is “scruffy” and “old-fashioned”. This is deemed front page news. The publicity was obviously supposed to coincide with Labour losing Nuneaton council, its most marginal council surrounded by Tory territory, in the council elections on Thursday. However Labour held Nuneaton. That did not stop the New Statesman article, by “research” authors James Morris and Ian Warren, from going ahead with the immortal phrase “While today’s Labour party has no hope of representing Nuneaton”.

Anti-Semitism and the Labour Party: A personal statement — Labour Briefing. I know what anti-Semitism is. 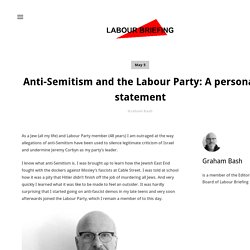 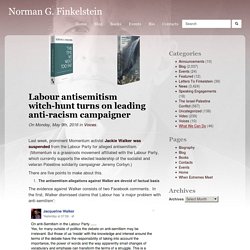 (Momentum is a grassroots movement affiliated with the Labour Party, which currently supports the elected leadership of the socialist and veteran Palestine solidarity campaigner Jeremy Corbyn.) There are five points to make about this. The antisemitism allegations against Walker are devoid of factual basis The evidence against Walker consists of two Facebook comments. In the first, Walker dismissed claims that Labour has ‘a major problem with anti-semitism’: This comment is in full agreement with the Jewish Socialists’ Group, Independent Jewish Voices, leading (Jewish) scholars Avi Shlaim and Norman Finkelstein, and—not trivially—the evidence. The second disagreed with a claim, made by another Facebook commenter, that it is illegitimate to boycott Israel while European antisemitism is on the rise. The American Jewish scholar behind Labour’s ‘antisemitism’ scandal breaks his silence. Norman Finkelstein is no stranger to controversy. 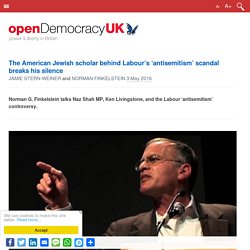 The American Jewish scholar is one of the world’s leading experts on the Israel-Palestine conflict and the political legacy of the Nazi holocaust. Apart from his parents, every member of Finkelstein’s family, on both sides, was exterminated in the Nazi holocaust. His 2000 book The Holocaust Industry, which was serialised in the Guardian, became an international best-seller and touched off a firestorm of debate. How Israel lobby manufactured UK Labour Party's anti-Semitism crisis. Hard-left activists target Jewish MP in 'terrifying' campaign of abuse.

Victim: Louise Ellman A veteran Labour MP has been targeted by activists who are “hell-bent” on attacking her at meetings of her constituency party — reportedly because she is Jewish. 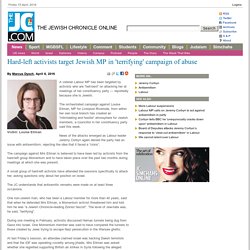 The orchestrated campaign against Louise Ellman, MP for Liverpool Riverside, from within her own local branch has created an “intimidating and hostile” atmosphere for Jewish members, a councillor in her constituency party said this week.