DWP’s death figures aren’t adding up. It seems clear that the new ‘statistical releases’ from the Department for Work and Pensions aren’t worth the immense amount of time they took to prepare – other than as tools for confusion and corruption. 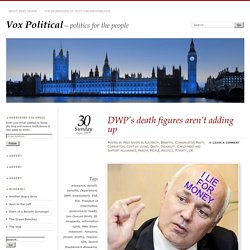 In the three days since they have been released, there has been confusion in the media about their interpretation, and dissent in the social media about how they may be used. Meanwhile, the DWP has withdrawn its appeal against my Freedom of Information request, claiming that it has provided all the facts I wanted. Iain Duncan Smith is no doubt delighted. Tory Minister Esther McVey defends lapdog over claims that poor Scots welcome having their benefits cut. 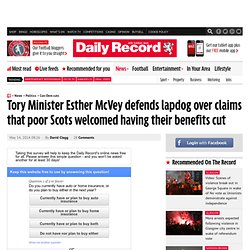 Employment Minister McVey sent Neil Couling north to take the flak over welfare cuts from MSPs instead of her. Iain Duncan Smith Faces Probe Over 'Bogus' Jobs On Jobseekers Website. Iain Duncan Smith's Department of Work and Pensions could be investigated after it emerged that over a third of a million jobs it advertises for job hunters could be bogus or unlawful. 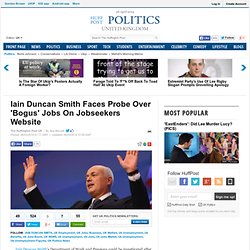 Labour MP Frank Field has asked the National Audit Office to launch a probe into the scale of job fraud on the DWP's Universal Jobmatch site, which all jobseeker's allowance claimants are forced to use to look for work and must apply for a minimum number of jobs each week. The DWP admitted to Field that 179 employer accounts advertising 352,569 jobs may potentially be in breach of the website's Terms and Conditions. Ministers were recently embarrassed by a a £10-per-hour prostitute job advert popping up in error on the Direct Gov website. Teresa Pearce, Labour member of Parliament's work and pensions committee, told HuffPostUK: "Jobs are posted on Universal Jobmatch by "employers" but a large number, specifically in sales, are commission only door-to-door catalogue sales - not proper jobs at all.

DWP: Housing benefit will be sanctioned. Bedroom tax 'helping to end child poverty' A Selection Of Especially Stupid Sanctions. The number and length of benefit sanctions has risen hugely under the coalition. 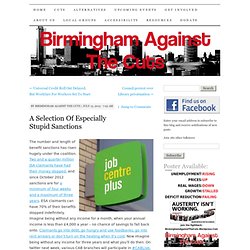 Two and a quarter million JSA claimants have had their money stopped, and since October 2012 sanctions are for a minimum of four weeks and a maximum of three years. ESA claimants can have 70% of their benefits stopped indefinitely. Imagine being without any income for a month, when your annual income is less than £4,000 a year – no chance of savings to fall back onto. Claimants go into debt, go hungry and use foodbanks, go into rent arrears or don’t turn on the heating when it’s cold. Vulnerable man starved to death after benefits were cut. The family of a man who starved to death four months after his benefits were cut off has called on the government to reform the way it treats people with mental health problems when it assesses their eligibility for benefits. 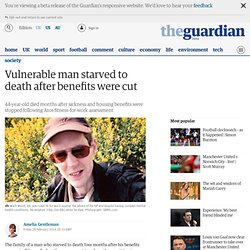 Mark Wood, 44, who had a number of complex mental health conditions, died at his home last August, months after an Atos fitness-for-work assessment found him fit for work. This assessment triggered a decision by the jobcentre to stop his sickness benefits, leaving him just £40 a week to live on. His housing benefits were stopped at around the same time. The Oxfordshire coroner, Darren Salter, said that although it was impossible to identify the cause of death, it was probably "caused or contributed to by Wood being markedly underweight and malnourished". He weighed 5st 8lbs (35kg) when he died; his doctor said his body mass index was not compatible with life. It was not clear whether the letter reached the jobcentre. He was a "sweet and gentle" person, she said. Welfare reform backfires on coalition. Just clarify to why I’m continually bashing the Tories that’s exactly what it means. 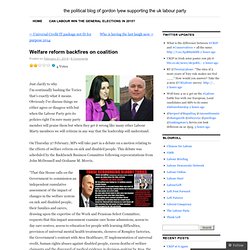 Obviously I’ve discuss things we either agree or disagree with but when the Labour Party gets its policies right I’m sure many party member will praise them but when they get it wrong like many other Labour Marty members we will criticize in any way that the leadership will understand. On Thursday 27 February, MPs will take part in a debate on a motion relating to the effects of welfare reform on sick and disabled people. This debate was scheduled by the Backbench Business Committee following representations from John McDonnell and Grahame M. Work placement: got six months spare? How Cameron got his facts wrong on workless families.

David Cameron's response in today's Telegraph to the Archbishop of Westminster, Vincent Nichols, who rightly warned at the weekend that the coalition's benefit cuts had left many in "hunger and destitution", includes the remarkable statistic that "the number of workless households doubled" under Labour. 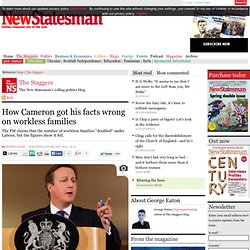 Unfortunately for the PM, it simply isn't true. As data from the ONS shows, the number of workless households (defined as a household where no one aged over 16 is in employment) rose from 3.7 million in 1997 to 3.9 million in 2010 (having fallen to 3.5 million before the crash), not 7.4 million as Cameron's claim would suggest. As a percentage, the number actually fell from 19.8 per cent to 19.2 per cent. What Cameron most likely meant to say is that the number of households that had never worked nearly doubled from 136,000 in 1997 to 269,000 in 2010. Regardless, he should now issue a correction. New Catholic cardinal renews attack on 'disgraceful' UK austerity cuts. The leader of the Roman Catholic church in England and Wales says he has been inundated with messages of support after branding the government's austerity programme a disgrace for leaving so many people in destitution. 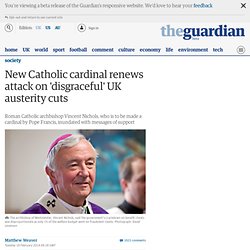 In an interview with BBC Radio 4's Today programme to mark his imminent appointment as a cardinal by Pope Francis, Archbishop Vincent Nichols expanded upon his comments to the Telegraph when he criticised the government's welfare reforms as "punitive". "The voices that I hear express anger and despair … Something is going seriously wrong when, in a country as affluent as ours, people are left in that destitute situation and depend solely on the handouts of the charity of food banks," Nichols said.