A history of media technology scares, from the printing press to Facebook. A respected Swiss scientist, Conrad Gessner, might have been the first to raise the alarm about the effects of information overload. 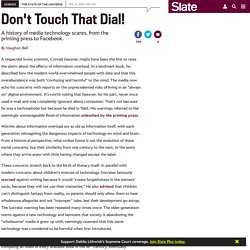 In a landmark book, he described how the modern world overwhelmed people with data and that this overabundance was both "confusing and harmful" to the mind. The media now echo his concerns with reports on the unprecedented risks of living in an "always on" digital environment. It's worth noting that Gessner, for his part, never once used e-mail and was completely ignorant about computers. Accelerating Change: What is 21st Century Media Literacy? Unless you're 50 years old or older, your attention has turned away from newspapers, magazines, TV and radio and shifted toward internet and electronic delivery of content. 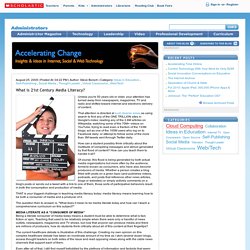 That attention is directed at such diverse areas as using search to find any of the ONE TRILLION sites in Google's index; reading any of the 2.6M articles on Wikipedia; watching some of the 70M+ videos on YouTube; trying to read even a fraction of the 133M blogs; act as one of the 100M users who log on to Facebook daily; or attempt to follow some of the more than 3M tweets sent through Twitter daily. How can a student possibly think critically about the multitude of competing messages and stimuli generated by that flood of content? Better yet, DON'T write that novel - Writers and Writing. For me, the end of October is always slightly tinged with dread — provoked not by Halloween spooks, not even by election season, but by the advent of something called NaNoWriMo. 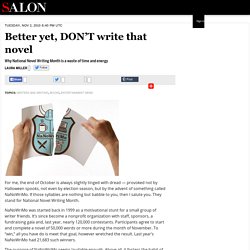 If those syllables are nothing but babble to you, then I salute you. They stand for National Novel Writing Month. NaNoWriMo was started back in 1999 as a motivational stunt for a small group of writer friends. It’s since become a nonprofit organization with staff, sponsors, a fundraising gala and, last year, nearly 120,000 contestants. Participants agree to start and complete a novel of 50,000 words or more during the month of November.

The purpose of NaNoWriMo seems laudable enough. In that spirit, NaNoWriMo has spawned countless tutorials, tip lists, FAQs, wikis and Twitter feeds, all designed to cheer the contestants on to their own personal finish line. Europe-v-facebook.org. Note: Facebook’s “Download Tools” do not give you a copy of all data! 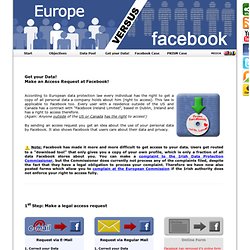 For a while now Facebook has been fooling its users and sends them a link to a “download tool” where you can download a small fraction of your data (less than half of the data categories Facebook is holding). If you did not receive more information by Facebook, you should file a complaint with the Irish Data Protection Commission to ensure that your right to access all files is enforced. All the details below at “Step 2”. 2nd Step: File a complaint with the Irish Data Protection Authority Got the Link to the “download tool”? The 5 Resources Framework - The 5 Resources Model of Critical Digital Literacy. Untitled. Jean-Louis WEISSBERG Déplacement virtuel et réseaux numériques : POURQUOI NOUS NE CROYONS PLUS LA TELEVISION ÉDITIONS L'HARMATTAN 5-7, rue de l'École-Polytechnique 75005 Paris Tél 01 40 46 79 20 email : harmattan1@wanadoo.fr 304 pages Prix : 160 F Table des matières Présentation Jean-Louis Weissberg est Maître de conférences en Sciences de l'Information et de la Communication à l'Université Paris XIII Il enseigne aussi en INFOCOM et au département HYPERMÉDIA de l'Université Paris VIII. 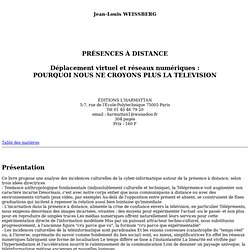 Web 2.0 Is Over, All Hail the Age of Mobile. By Hamish McKenzie On April 27, 2012 When they look back at this era, Internet historians will mark Facebook’s Instagram acquisition as the symbolic moment when the Great Shift was confirmed. 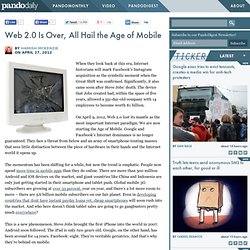 Significantly, it also came soon after Steve Jobs’ death. The device that Jobs created had, within the space of five years, allowed a 551-day-old company with 14 employees to become worth $1 billion. On April 9, 2012, Web 2.0 lost its mantle as the most important Internet paradigm. We are now starting the Age of Mobile. The momentum has been shifting for a while, but now the trend is emphatic. This is a new phenomenon. They know this much themselves, and they’re worried. We do not currently directly generate any meaningful revenue from the use of Facebook mobile products, and our ability to do so successfully is unproven. It’s clear: The centre of gravity is shifting. Web 2.0 Technologies: How We See Them - Contestation. Web 2.0 technologies have developed and changed over the years, but these changes were influenced by the demands and expectations of users. 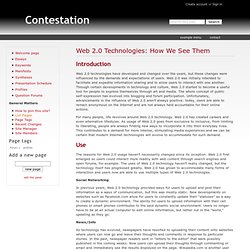 Web 2.0 was initially intended to facilitate and expedite information sharing and to allow users to interact with one another. Through certain developments in technology and culture, Web 2.0 started to become a useful tool for people to express themselves through art and media. The whole concept of public self-expression has evolved into blogging and forum participation. Unfortunately, advancements in the influence of Web 2.0 aren’t always positive: today, users are able to remain anonymous on the Internet and are not always held accountable for their online actions.

For many people, life revolves around Web 2.0 technology.