The making of Shylight (short version) from Studio DRIFT on Vimeo. Storyful. Next edition - Fablab Festival Toulouse 2015 - Conférences et ateliers DIY, Imprimante 3D, robotique. The FabLab Festival 2015 will take place from 6 to 10 May 2015 in Toulouse (France) The « FabLab Festival 2015″ is open to any citizen, whether child, student, retired, researcher or professional. 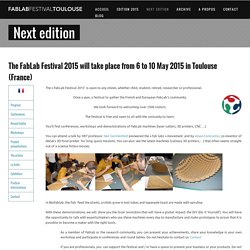 Once a year, a festival to gather the French and European FabLab’s community. We look forward to welcoming over 2500 visitors. The festival is free and open to all with the curiousity to learn. You’ll find conferences, workshops and demonstrations of FabLab machines (laser cutters, 3D printers, CNC …). You can attend a talk by MIT professor Neil Gershenfeld pioneered the « fab labs » movement and by Anjan Contractor, co-inventor of NASA’s 3D food printer for long space missions. In BioFablab, the fish feed the plants, orchids grow in test tubes and tapenade toast are made with spirulina. With these demonstrations, we will show you the local revolution that will have a global impact: the DIY (Do It Yourself).

We are getting ready for change and have a lot of surprises in store until May! Pixel: A Mesmerizing Dance Performance Incorporating Interactive Digital Projection. Pixel is an innovative dance performance conceived by French performance artists Adrien Mondot and Claire Bardainne, known collectively as the Adrien M / Claire B Company. 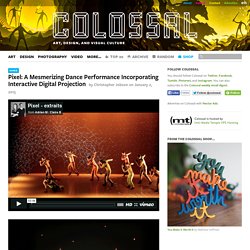 The hour-long performance incorporates a host of digital projection mapping techniques, 11 dancers, and bills itself as “a work on illusion combining energy and poetry, fiction and technical achievement, hip hop and circus.” Pixel premiered at Maison des Arts de Créteil on November 15th of last year, and above is a 3-minute exceprt of the shows most jaw-dropping moments. (via Jason Sondhi) Makerfest. Home page. Make a Maker Faire. Mini Maker Faires are independently produced celebrations of local maker culture. 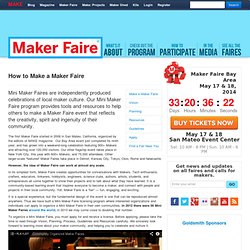 Our Mini Maker Faire program provides tools and resources to help others to make a Maker Faire event that reflects the creativity, spirit and ingenuity of their community. The first Maker Faire started in 2006 in San Mateo, California, organized by the editors of MAKE magazine. Our Bay Area event just completed its ninth year, and has grown into a weekend-long celebration featuring 900+ Makers and attracting over 120,000 visitors.

Our other flagship event takes place in New York City, this year with 600+ Makers, and 75,000 attendees. Other larger-scale “featured” Maker Faires take place in Detroit, Kansas City, Tokyo, Oslo, Rome and Newcastle. However, the idea of Maker Faire can work at almost any scale. In its simplest form, Maker Faire creates opportunities for conversations with Makers. It is a special experience, but the fundamental design of the event is one that can be reproduced almost anywhere. Mini Maker Faire Application. The Maker Movement's Precarious Place in Society and Education. At its heart, Maker Faire is a show for kids. 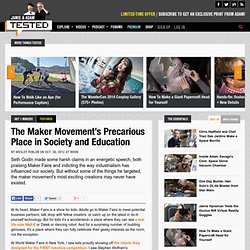 Adults go to Maker Faire to meet potential business partners, talk shop with fellow creators, or catch up on the latest in do-it-yourself technology. But for kids it's a wonderland--a place where they can see a real life-size Wall-E or Dalek or dancing robot. And for a surprising number of budding geniuses, it's a place where they can fully celebrate their geeky interests as the norm, not the exception. At World Maker Faire in New York, I saw kids proudly showing off the robots they designed for the FIRST robotics competition. I saw Stephen Wolfram's 13-year-old son code a path for an autonomous quadrocopter on a stage in front of hundreds of people. Maker Faire is also a show about kids: What we're teaching them, how we're teaching them, and why the Maker movement is encouraging them to be creative.

Godin went on to critique education and the "kits" that have replaced elements of our society that once favored user-changeable parts. 14 'makers' who are changing the DIY world. Inventors and tinkerers have always been around, but until recently most “makers” toiled away in secluded basements and garages, fashioning their creations from homemade materials. 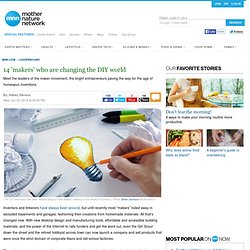 All that’s changed now. With new desktop design and manufacturing tools, affordable and accessible building materials, and the power of the Internet to rally funders and get the word out, even the Girl Scout down the street and the retired hobbyist across town can now launch a company and sell products that were once the strict domain of corporate titans and old-school factories. The maker movement may well be the next industrial revolution. If nothing else, it’s leveling the playing field and putting a novel spin on innovation.

The following are some of the dreamers and builders who are leading the DIY charge. 1. Known for her pink hair and lip ring, Limor Fried, an MIT engineer and lifelong electronics tinkerer, founded Adafruit in 2005 to help other inventors track down parts for their DIY projects. 2. 3. Festival de Ciència, Tecnologia i Innovació 2014. Maker Faire Africa.