CAPSULE: GALLINO, THE CHICKEN SYSTEM (2012) « 366 Weird Movies. Film Threat: February 1997, Number 2, Vol. 3. As promised, once we raised our first $1K in our crowdfunding bid to return Film Threat to print, I’d start making with the gifts. 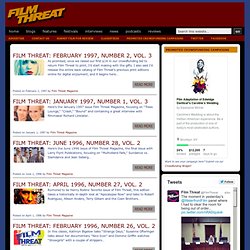 Posted on June 1, 1996 by Film Threat Magazine Rumored to be Henry Rollins’ favorite issue of Film Threat, this edition takes a historically in-depth look at “Apocalypse Now” and talks to Robert Rodriguez, Allison Anders, Terry Gilliam and the Coen Brothers… Horror, underground, independent, arthouse, experimental, surreal, drama, cult & extreme cinema. Plot: A man is hoping to meet the woman from his dreams as he wanders around the stormy Antarctica, when all of the sudden he stumbles into a Chicken store. 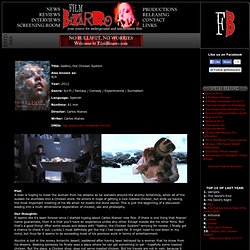 He enters in hope of getting a nice roasted chicken, but ends up having the most important meeting of his life when he meets the store owner. This is just the beginning of a discussion leading into a multi dimensional exploration of chicken, sex and philosophy. Our thoughts: It seems like it's been forever since I started hyping about Carlos Atanes' new flick. If there is one thing that Atanes' name guarantees, then it is that you'll have an experience unlike any other. Except maybe like his other films. Alucinio is lost in the snowy Antarctic desert, saddened after having been betrayed by a woman that he knew from his dreams. Carlos Atanes as a filmmaker improves with each creation, and by that I specifically mean that he can tell his wild stories in more sensible matter. Disqus – The Web’s Community of Communities.

MFJ: A Thought About Leni Riefenstahl, Maya Deren, and Gay and Lesbian Film. Printed in MFJ No. 41 (Fall 2003) Lesbian and Gay Experimental Cinema/Stan Brakhage Remembrances I was recently working on a syllabus for a course at the City University of New York Graduate Center on Gay and Lesbian Experimental Film from Edison to Haynes. 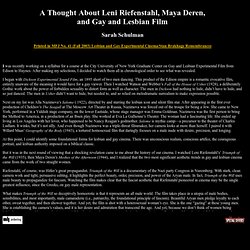 After making my selections, I decided to watch them all in chronological order to see what was revealed. I began with Dickson Experimental Sound Film, an 1895 short of two men dancing. This product of the Edison empire is a romantic evocative film, entirely unaware of the meaning it would have for a gay viewer. Then I watched Watson and Webber’s Fall of the House of Usher (1928), a deliberately Gothic work about the power of forbidden sexuality to distort form as well as character. Next on my list was Alla Nazimova’s Salome ( 1922), directed by and starring the lesbian icon and silent film star.

At this point, I could identify some foundational forms for lesbian and gay cinema. Ferdy on Films. 13th04 -2013 | 3 comments » Beyond the Valley of the Dolls (1970) Director: Russ Meyer By Roderick Heath Roger Ebert’s death last week at the age of 70 brought on a wealth of lionising appreciations and articles, most of which celebrated the obvious and salient fact that he was a dean of mainstream American film criticism. 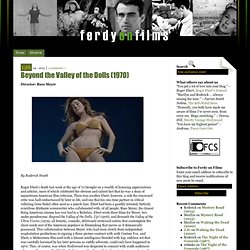 There was another Ebert, however, a side the renowned critic was half-embarrassed by later in life, and one that his one-time partner in critical volleying Gene Siskel often used as a punch-line. Beyond the Valley of the Dolls traces essentially the same arc of morality play about talented, pretty youngsters who hit Los Angeles hoping for fame and fortune but find the seedy underbelly of the Dream Factory. Z-Man is immediately taken with Kelly and, after changing the band’s name to The Carrie Nations in reference to the saloon-smashing suffragette, he turns them into a sensation. 2013 NoBudge Awards — NoBudge.com. Kakaok's Library. 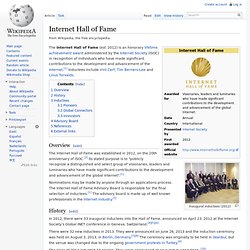 Overview[edit] The Internet Hall of Fame was established in 2012, on the 20th anniversary of ISOC.[2] Its stated purpose is to "publicly recognize a distinguished and select group of visionaries, leaders and luminaries who have made significant contributions to the development and advancement of the global Internet".[1] Nominations may be made by anyone through an applications process. The Internet Hall of Fame Advisory Board is responsible for the final selection of inductees.[1] The advisory board is made up of well known professionals in the Internet industry.[3] History[edit] There were 32 new inductees in 2013.