Shapiro v Fbi 1. CAUGHT ON CAMERA - Sparks Fly in Pharmacy Heist. Are Hackers the new (historical) Illuminati? : hacking. Ike Had a Dream, and it Unfortunately Came True. Today marks the 55th anniversary of a world-historical speech by the last war hero to occupy the White House: President Dwight D. 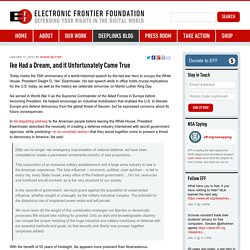 “Ike” Eisenhower. His last speech while in office holds crucial implications for the U.S. today, as well as the history we celebrate tomorrow, on Martin Luther King Day. Ike served in World War II as the Supreme Commander of the Allied Forces in Europe before becoming President. He helped encourage an industrial mobilization that enabled the U.S. to liberate Europe and defend democracy from the global threat of fascism, but he expressed concerns about its future consequences.

In his departing address to the American people before leaving the White House, President Eisenhower described the necessity of creating a defense industry intertwined with secret government agencies, while predicting—in no uncertain terms—that they would together come to present a threat to democracy in America. The Great Brain Robbery. The following is a script from "The Great Brain Robbery" which aired on Jan. 17, 2016. 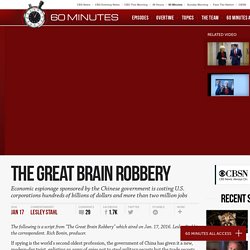 Lesley Stahl is the correspondent. Rich Bonin, producer. If spying is the world's second oldest profession, the government of China has given it a new, modern-day twist, enlisting an army of spies not to steal military secrets but the trade secrets and intellectual property of American companies. w2sp12 final4. The_web_never_forgets. Google starts punishing AdBlock users with unskippable YouTube video ads. Update: A thread has been discovered on the Chromium project issue tracker detailing this as a bug that needs to be fixed. 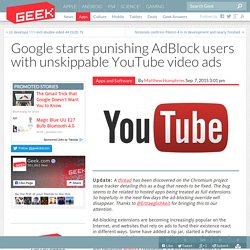 The bug seems to be related to hosted apps being treated as full extensions. So hopefully in the next few days the ad-blocking override will disappear. Thanks to @Ertraeglichkeit for bringing this to our attention. Ad-blocking extensions are becoming increasingly popular on the Internet, and websites that rely on ads to fund their existence react in different ways. Some have added a tip jar, started a Patreon account, or simply show a message asking visitors to disable the ad blocker. Multiple reports have appeared on Twitter that even with AdBlock enabled, YouTube is now able to show video ads. The End of Advertising as We Know It. How do you know if you’re wealthy? 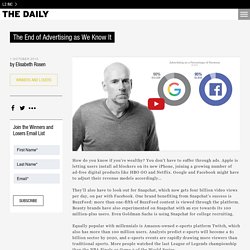 You don’t have to suffer through ads. Apple is letting users install ad blockers on its new iPhone, joining a growing number of ad-free digital products like HBO GO and Netflix. Google and Facebook might have to adjust their revenue models accordingly… Adblock extension sells to mystery buyer. Adblock, a popular extension for blocking advertising in Chrome and Safari with more than 40 million users, was quietly sold today. 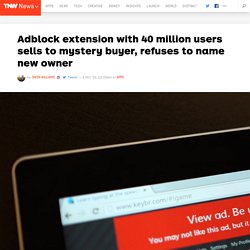 Shutting down persona.org in November 2016. Ryan Kelly rfkelly at mozilla.com Tue Jan 12 01:06:54 UTC 2016 Messages sorted by: [ date ] [ thread ] [ subject ] [ author ] Hi Everyone, When the Mozilla Identity team transitioned Persona to community ownership, we committed resources to operational and security support throughout 2014 [1], and renewed that commitment for 2015 [2]. 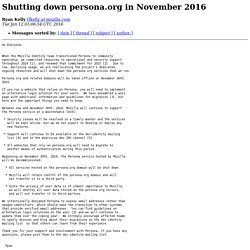 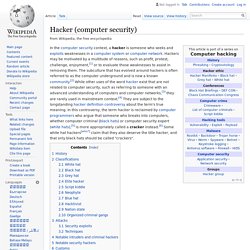 While including those who endeavor to strengthen such mechanisms, it is more often used by the mass media and popular culture to refer to those who seek access despite these security measures. That is, the media portrays the 'hacker' as a villain. Nevertheless, parts of the subculture see their aim in correcting security problems and use the word in a positive sense. White hat is the name given to ethical computer hackers, who utilize hacking in a helpful way. The subculture around such hackers is termed network hacker subculture, hacker scene or computer underground. #Hackademics: How Hacker Culture Is Changing Recruitment  We were all told the same thing. 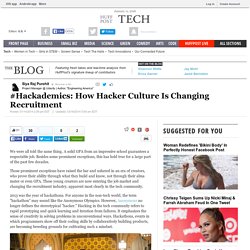 A solid GPA from an impressive school guarantees a respectable job. Besides some prominent exceptions, this has held true for a large part of the past few decades. Those prominent exceptions have raised the bar and ushered in an era of creators, who prove their ability through what they build and know, not through their alma mater or even GPA. These young creators are now entering the job market and changing the recruitment industry, apparent most clearly in the tech community. The Early Hackers. The beginnings of the hacker culture as we know it today can be conveniently dated to 1961, the year MIT acquired the first PDP-1. 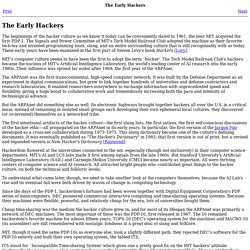 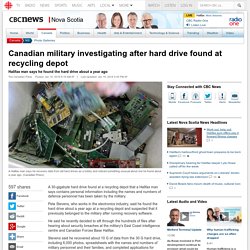 Pete Stevens, who works in the electronics industry, said he found the hard drive about a year ago at a recycling depot and suspected that it previously belonged to the military after running recovery software. He said he recently decided to sift through the hundreds of files after hearing about security breaches at the military's East Coast intelligence centre and Canadian Forces Base Halifax. Stevens said he recovered about 10 G of data from the 30 G hard drive, including 6,000 photos, spreadsheets with the names and numbers of military personnel and their families, and completed applications for security clearance.

Policing Robots to Hit The Streets in California.