The Winter Wonders. Scorpius Rising As we quickly approach the middle of Winter, are also treated to both the best observing conditions of the year (when its not raining that is!) 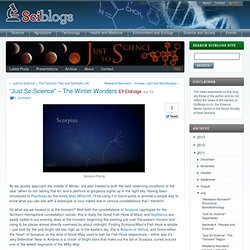 And a plethora of gorgeous sights up in the night sky. Having been introduced to Pearltrees by the lovely Miss Whitcroft, I’ll be using it in future posts to provide a simple way to know what you can see with a telescope or your naked eye in various constellations that I mention! Scorpius Stars Scorpius Diagram But, once again, other than being easy to find, the stars of Scorpius itself really aren’t particularly interesting (excepting supergiant, red, soon-to-supernova Antares), but because of it’s proximity to the galactic centre it houses several awesome stellar spectacles: Messier Objects 4,6,7,80 and NGC 6302, 6334, 6357 and 6388. Butterfly Nebula, NGC 6302 Cat's Paw Nebula, NGC 6334 First up is the Butterfly Nebula, a complex and immense cloud of ionized gas. Scorpius Pearltree References: Butterfly Cluster.

The Butterfly Cluster (cataloged as Messier 6 or M6, and as NGC 6405) is an open cluster of stars in the constellation of Scorpius. 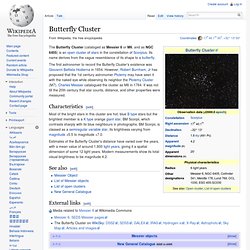 Its name derives from the vague resemblance of its shape to a butterfly. The first astronomer to record the Butterfly Cluster's existence was Giovanni Battista Hodierna in 1654. Messier 7. Messier 7 or M7, also designated NGC 6475 and sometimes known as the Ptolemy Cluster,[4] is an open cluster of stars in the constellation of Scorpius. 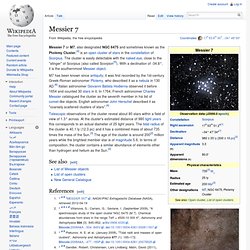 The cluster is easily detectable with the naked eye, close to the "stinger" of Scorpius (also called Scorpion[5]). With a declination of -34.8°, it is the southernmost Messier object. M7 has been known since antiquity; it was first recorded by the 1st-century Greek-Roman astronomer Ptolemy, who described it as a nebula in 130 AD.[6] Italian astronomer Giovanni Batista Hodierna observed it before 1654 and counted 30 stars in it.

Messier 80. Messier 80 (also known as M80 or NGC 6093) is a globular cluster in the constellation Scorpius. 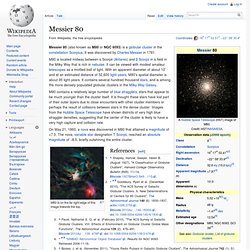 It was discovered by Charles Messier in 1781. M80 is located midway between α Scorpii (Antares) and β Scorpii in a field in the Milky Way that is rich in nebulae. It can be viewed with modest amateur telescopes as a mottled ball of light. With an apparent diameter of about 10' and at an estimated distance of 32,600 light-years, M80's spatial diameter is about 95 light-years. It contains several hundred thousand stars, and is among the more densely populated globular clusters in the Milky Way Galaxy. M80 contains a relatively large number of blue stragglers, stars that appear to be much younger than the cluster itself. On May 21, 1860, a nova was discovered in M80 that attained a magnitude of +7.0. Scorpius_IAU. Scorpius. Scorpius, sometimes known as Scorpio, is one of the constellations of the zodiac. 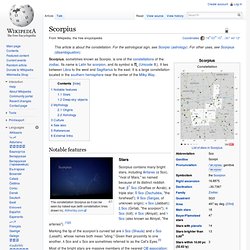 Its name is Latin for scorpion, and its symbol is Notable features The constellation Scorpius as it can be seen by naked eye (with constellation lines drawn in). AlltheSky.com Stars Scorpius contains many bright stars, including Antares (α Sco), "rival of Mars," so named because of its distinct reddish hue; β1 Sco (Graffias or Acrab), a triple star; δ Sco (Dschubba, "the forehead"); θ Sco (Sargas, of unknown origin); ν Sco (Jabbah); ξ Sco (Girtab, "the scorpion"); π Sco (Iclil); σ Sco (Alniyat); and τ Sco (also known as Alniyat, "the arteries"). [1][2] Marking the tip of the scorpion's curved tail are λ Sco (Shaula) and υ Sco (Lesath), whose names both mean "sting.

" Most of the bright stars are massive members of the nearest OB association: Scorpius-Centaurus.[4] Its bright stars form a pattern like a longshoreman's hook. Scorpius. Antares. Antares, (/ænˈtɑːriːz/) also known by its Bayer designation Alpha Scorpii (abbreviated to α Scorpii or α Sco), is the seventeenth brightest star in the nighttime sky[a] and the brightest star in the constellation Scorpius, and is often referred to as "the heart of the scorpion". 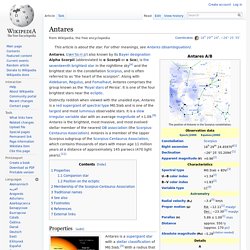 Along with Aldebaran, Regulus, and Fomalhaut, Antares comprises the group known as the 'Royal stars of Persia'. It is one of the four brightest stars near the ecliptic. Distinctly reddish when viewed with the unaided eye, Antares is a red supergiant of spectral type M0.5Iab and is one of the largest and most luminous observable stars. It is a slow irregular variable star with an average magnitude of +1.09.[9] Antares is the brightest, most massive, and most evolved stellar member of the nearest OB association (the Scorpius-Centaurus Association).

Properties[edit] NGC 6302. NGC 6334. Coordinates: 17h 19m 58s, −35° 57′ 47″ NGC 6334 (also known as the Cat's Paw Nebula, Bear Claw Nebula and Gum 64) is an emission nebula located in the constellation Scorpius.[3] It was discovered by astronomer John Herschel in 1837, who observed it from the Cape of Good Hope in South Africa.[4] Gallery[edit] Wide view centred on NGC 6334.This video compares the near-infrared and submillimetre views of the star formation region. 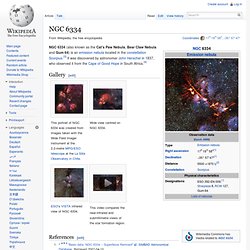 References[edit] External links[edit] NGC 6357. NGC 6357 and Pismis 24 This nebula was given the name War and Peace Nebula by the Midcourse Space Experiment scientists because of its appearance. 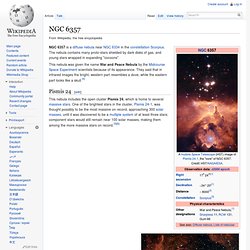 They said that in infrared images the bright, western part resembles a dove, while the eastern part looks like a skull.[4] Pismis 24[edit] This nebula includes the open cluster Pismis 24, which is home to several massive stars. NGC 6388 Hubble WikiSky. Messier 4. Messier 4 or M4 (also designated NGC 6121) is a globular cluster in the constellation of Scorpius. 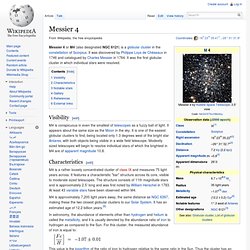 It was discovered by Philippe Loys de Chéseaux in 1746 and catalogued by Charles Messier in 1764.