Silicon Valley. Silicon Valley - Wikipedia. The word "silicon" originally referred to the large number of silicon chip innovators and manufacturers in the region, but the area is now the home to many of the world's largest high-tech corporations, including the headquarters of 39 businesses in the Fortune 1000, and thousands of startup companies.

Silicon Valley also accounts for one-third of all of the venture capital investment in the United States, which has helped it to become a leading hub and startup ecosystem for high-tech innovation and scientific development. It was in the Valley that the silicon-based integrated circuit, the microprocessor, and the microcomputer, among other key technologies, were developed. As of 2013, the region employed about a quarter of a million information technology workers.[1] Silicon Valley . American Experience . WGBH. Silicon Valley. History - Part 3 (The Rise of Silicon Valley): Stanford University. In 1939, with the encouragement of their professor and mentor, Frederick Terman, Stanford alumni David Packard and William Hewlett established a little electronics company in a Palo Alto garage. 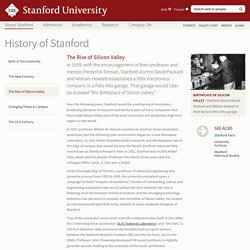 That garage would later be dubbed "the Birthplace of Silicon Valley. " Over the following years, Stanford would be a wellspring of innovation, producing advances in research and the formation of many companies that have made Silicon Valley one of the most innovative and productive high-tech regions in the world. About Silicon Valley. Silicon Valley is in the southern part of the San Francisco Bay Area in Northern California in the United States.

The region is home to many of the world's largest technology companies including Apple, Cisco, Google, HP, Intel and Oracle. The term originally referred to the region's large number of silicon chip innovators and manufacturers, but eventually came to refer to all the high-tech businesses in the area; it is now generally used as a metonym for the American high-tech sector. Despite the development of other high-tech economic centers throughout the United States and the world, Silicon Valley continues to be the leading hub for high-tech innovation and development, accounting for 1/3 of all of the venture capital investment in the United States.

SILICON VALLEY, located around Santa Clara and San Jose, California, is the home of many key U.S. corporations that specialize in advanced electronic and information technologies. First called "Silicon Valley" in 1971 by a local newsletter writer, Donald C. Hoefler, the "Valley" became the center of newly developing technologies that many believed would revolutionize computers, telecommunications, manufacturing procedures, warfare, and even U.S. society itself.