Colombian ‘no’ a big blow for Norway. Norway, Oslo, Your latest news from Norway, Norway News in, Norway's News in English, LATEST NEWS FROM NORWAY. King Harald and Queen Sonja of Norway celebrated their Silver Anniversary of their accession to the Norwegian throne earlier this year on 17 January. 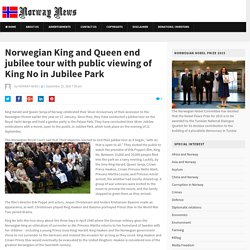 How a boxing match turned into a political fight for Norway's PM - The Local. Solberg was criticized by some for celebrating Brækhus's victory. 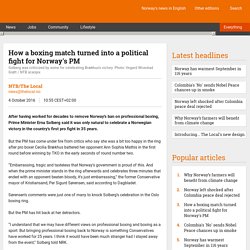 Photo: Vegard Wivestad Grøtt / NTB scanpix After having worked for decades to remove Norway’s ban on professional boxing, Prime Minister Erna Solberg said it was only natural to celebrate a Norwegian victory in the country’s first pro fight in 35 years. Norway's trade surplus shrinks by two-thirds - The Local. Norway couple takes wedding photos to epic new heights - The Local. You may have seen some unique wedding and engagement photos online, but you’ve likely never seen a couple go to such great heights as these Norwegian lovers. 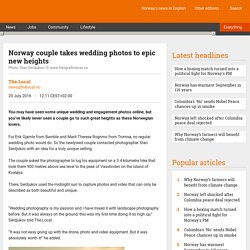 For Erik Gjømle from Bamble and Marit Therese Rognmo from Tromsø, no regular wedding photo would do. So the newlywed couple contacted photographer Stan Serdjukov with an idea for a truly unique setting. The couple asked the photographer to lug his equipment on a 3.4 kilometre hike that took them 900 metres above sea level to the peak of Vasstinden on the island of Kvaløya. There, Serdjukov used the midnight sun to capture photos and video that can only be described as both beautiful and unique.

“Wedding photography is my passion and I have mixed it with landscape photography before. “It was not easy going up with the drone, photo and video equipment. Frozen effect bringing 'too many tourists' to Norway - The Local. Strong reactions in Norway to hijab discrimination verdict - The Local. Malika Bayan and Merete Hodne. 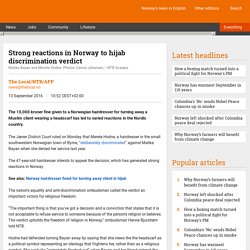 Photos: Carina Johansen, / NTB Scanpix The 10,000 kroner fine given to a Norwegian hairdresser for turning away a Muslim client wearing a headscarf has led to varied reactions in the Nordic country. 323 reindeer killed by lightning in Norway - The Local. 'I am so very happy and lucky to be alive': Freed Norwegian - The Local. Kjartan Sekkingstad with Norway's ambassador to the Philippines Erik Førner in Davao. 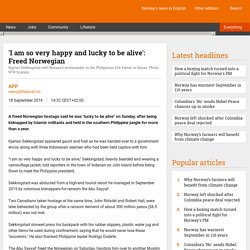 Photo: NTB Scanpix A freed Norwegian hostage said he was "lucky to be alive" on Sunday, after being kidnapped by Islamic militants and held in the southern Philippine jungle for more than a year. Kjartan Sekkingstad appeared gaunt and frail as he was handed over to a government envoy along with three Indonesian seamen who had been held captive with him. "I am so very happy and lucky to be alive," Sekkingstad, heavily bearded and wearing a camouflage jacket, told reporters in the town of Indanan on Jolo island before being flown to meet the Philippine president. The Government. 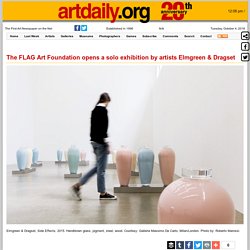 -The FLAG Art Foundation presents Changing Subjects, a solo exhibition by internationally acclaimed artists Elmgreen & Dragset, on view October 1 – December 17, 2016. The exhibition takes place on FLAG’s 9th and 10th floor galleries, and includes a site-specific sculpture on its outdoor terrace overlooking the Hudson River. Changing Subjects, designed by the artists, presents new and existing works from the duo’s twenty-year-long collaboration that address existential issues linked to identity, sexuality, and mortality, as well as an examination of social value systems and the expectations that surround them.

Pamintuan: People will accept peace agreement with NDF. ANGELES CITY -- "The ongoing peace negotiation with the National Democratic Front has the support of our people. 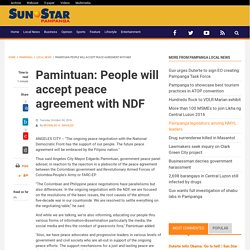 The future peace agreement will be embraced by the Filipino nation. " Thus said Angeles City Mayor Edgardo Pamintuan, government peace panel adviser, in reaction to the rejection in a plebiscite of the peace agreement between the Colombian government and Revolutionary Armed Forces of Colombia-People's Army or FARC-EP. Google Street View documents Norwegian nature - Official travel guide to Norway - visitnorway.com. The hike to Trolltunga is among Norway’s most popular. 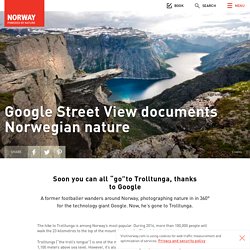 During 2016, more than 100,000 people will walk the 23 kilometres to the top of the mountain above the Ringedalsvatnet lake. Trolltunga (“the troll’s tongue”) is one of the most spectacular scenic cliffs in Norway, situated about 1,100 meters above sea level. However, it’s also a demanding hike, and the round trip can take 10–12 hours. Some should think twice before starting the climb, as local rescue crews have had to complete 28 operations there so far in 2016. Soon, however, we will all be able to get a really good taste of what the trip is really like. Oslo passes 'climate budget' to cut emissions - The Local. Central Oslo seen from Holmenkolmen. 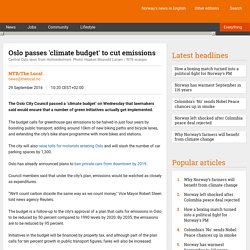 Photo: Haakon Mosvold Larsen / NTB scanpix The Oslo City Council passed a ‘climate budget’ on Wednesday that lawmakers said would ensure that a number of green initiatives actually get implemented. The budget calls for greenhouse gas emissions to be halved in just four years by boosting public transport, adding around 10km of new biking paths and bicycle lanes, and extending the city’s bike share programme with more bikes and stations. Council members said that under the city’s plan, emissions would be watched as closely as expenditures. “We'll count carbon dioxide the same way as we count money," Vice Mayor Robert Steen told news agency Reuters. The budget is a follow-up to the city’s approval of a plan that calls for emissions in Oslo to be reduced by 50 percent compared to 1990 levels by 2020. But public transport passengers will face increased prices from next year, although Berg stressed that the rate increases are not part of the budget.

Anna's Story: Trans Girl Hails Norway's New Gender Law. Kids in Norway as young as 6 years old are now able to self-identify their gender, thanks to a recent change in the law there. 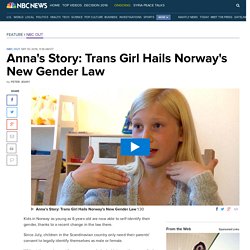 Since July, children in the Scandinavian country only need their parents' consent to legally identify themselves as male or female. Veidekke ASA: Signed contract to build environmentally friendly school in Horten 2016-09-28. PR-Inside.com: 2016-09-28 19:19:02 Today Veidekke Entreprenør entered into a contract with Vestfold county municipality to build a new upper secondary school in Horten for 1,200 pupils. The school will be built as an energy positive building and certified in accordance with the BREEAM NOR Outstanding environmental standard.

This is a turnkey contract valued at NOK 450 million, excluding VAT. Nobel Prize for Colombia peace deal or UN climate pact? By BY MARK LEWIS and KARL RITTERAssociated Press STAVANGER, Norway (AP) - Guessing the winner of the Nobel Peace Prize is notoriously hard because the secretive Norwegian Nobel Committee isn't dropping any hints, except that 376 people and groups have been nominated for the award, which will be announced on Oct. 7. That doesn't stop Nobel watchers from speculating, sometimes based on their own preferences or the small number of nominations that were made public by those who submitted them. This year they include Pope Francis, the Afghan women's cycling team, former National Security Agency contractor Edward Snowden, the White Helmets rescue group in Syria and Nadia Murad, a Yazidi woman who escaped sexual slavery and has become a spokeswoman for those abused by Islamic State militants.

Norway to research ways to capture carbon from industrial plants. Zombies seize Asbury Park Boardwalk. ASBURY PARK - Despite the threat of rain and an occasional drizzle, the undead could not be stopped from entertaining the living on the boardwalk Saturday for the ninth annual Zombie Walk. Russ DeSantis for the Asbury Park Press While there were plenty of terrifying and just disgusting corpses in various states of decay wandering about, a number of the zombies came dressed as fictional characters from pop culture.

A group of participants were made up as characters from the hit HBO fantasy series “Game of Thrones” — including Daenerys Targaryen, Jon Snow, Cersei Lannister, Arya Stark, Stannis Baratheon, Melisandre and Margaery Tyrell. Cassandra Otten, 26, of Red Bank, was dressed as Margarery Tyrell — spoiler alert — after she perished in the explosion at the Great Sept of Baelor this past season. Norway. Visit Norway - Official travel guide to Norway - visitnorway.com.