Music Is Like Medication for Some Kids With ADHD. Some children, especially those who have ADHD, may benefit from listening to music while studying. 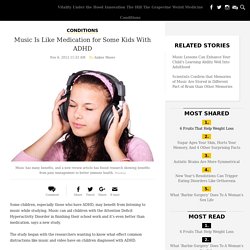 Music can aid children with the Attention Deficit Hyperactivity Disorder in finishing their school work and it's even better than medication, says a new study. The study began with the researchers wanting to know what effect common distractions like music and video have on children diagnosed with ADHD. "If a kid says he can watch TV and focus, it's just not true. With television, we found out what we needed to know. But with music we actually discovered, in most cases, it didn't really affect the children," said William E. The study included boys who were either on ADHD medications or weren't taking any medications for the condition. Researchers found that while music may be a distraction for few children, it may help others concentrate better. Music Therapy for ADHD: How Rhythm Builds Focus. "Nothing activates the brain so extensively as music," says Oliver Sacks, M.D., professor of neurology at Columbia University and author of Musicophilia. 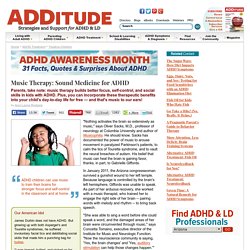 He should know. Sacks has documented the power of music to arouse movement in paralyzed Parkinson's patients, to calm the tics of Tourette syndrome, and to vault the neural breaches of autism. His belief that music can heal the brain is gaining favor, thanks, in part, to Gabrielle Giffords. In January 2011, the Arizona congresswoman survived a gunshot wound to her left temple. Because language is controlled by the brain's left hemisphere, Giffords was unable to speak.

"She was able to sing a word before she could speak a word, and the damaged areas of her brain were circumvented through music," says Concetta Tomaino, executive director of the Institute for Music and Neurologic Function. Therapy That Plays Well How does it work? MUSIC PROVIDES STRUCTURE. Does music help you focus? Yes, but only if you like the music : CULTURE : Tech Times. It's the age-old question: Do you like to have music on while you're working? 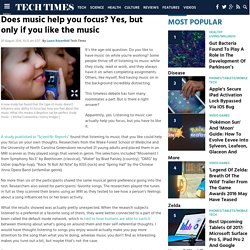 Some people thrive off of listening to music while they study, read or work, and they always have it on when completing assignments. Others, like myself, find having music on in the background incredibly distracting. This timeless debate has torn many roommates a part. But is there a right answer? Apparently, yes. Music 'releases mood-enhancing chemical in the brain' Music releases a chemical in the brain that has a key role in setting good moods, a study has suggested. 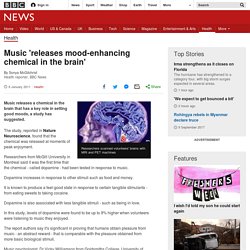 The study, reported in Nature Neuroscience, found that the chemical was released at moments of peak enjoyment. Researchers from McGill University in Montreal said it was the first time that the chemical - called dopamine - had been tested in response to music. Dopamine increases in response to other stimuli such as food and money. It is known to produce a feel-good state in response to certain tangible stimulants - from eating sweets to taking cocaine.

Dopamine is also associated with less tangible stimuli - such as being in love. How Music Can Improve Worker Productivity - Workstation. Photo Editors’ note: Here’s one of our favorite stories from the archives, now being featured in our Smarter Living collection. 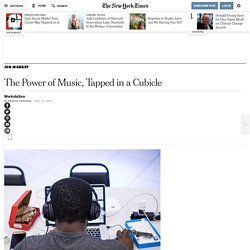 THE guy in the next cubicle is yammering away on the phone. Across the room, someone begins cursing loudly at a jammed copy machine. The headphones on the other end of your desk suddenly look very appealing. Would anyone mind if you tapped into your iTunes playlist for a while? Motivation: Get into “Flow” with music in sport and exercise.

For elite athletes, fitness fanatics and gym goers, having the right frame of mind is the best way to achieve the perfect performance. 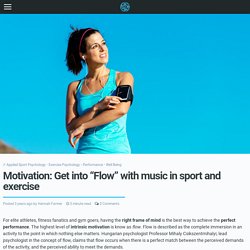 The highest level of intrinsic motivation is know as flow. Flow is described as the complete immersion in an activity to the point in which nothing else matters. Hungarian psychologist Professor Mihaly Csikszentmihalyi, lead psychologist in the concept of flow, claims that flow occurs when there is a perfect match between the perceived demands of the activity, and the perceived ability to meet the demands. During flow, you lose self-consciousness and become completely immersed in the activity. Dopamine Functions. By Dr Ananya Mandal, MD Dopamine is a neurotransmitter released by the brain that plays a number of roles in humans and other animals. 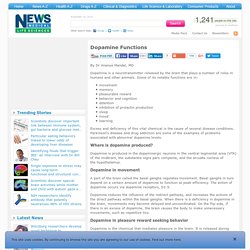 Some of its notable functions are in: movement memory pleasurable reward behavior and cognition attention inhibition of prolactin production sleep mood learning Excess and deficiency of this vital chemical is the cause of several disease conditions. Parkinson's disease and drug addiction are some of the examples of problems associated with abnormal dopamine levels.

Where is dopamine produced? The Science Behind Music – TCNJ Journal. By Mylin Batipps It’s no secret that everybody loves listening to music. 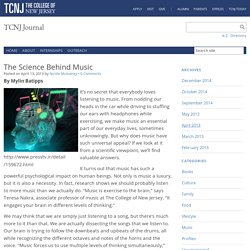 From nodding our heads in the car while driving to stuffing our ears with headphones while exercising, we make music an essential part of our everyday lives, sometimes unknowingly. But why does music have such universal appeal? If we look at it from a scientific viewpoint, we’ll find valuable answers. It turns out that music has such a powerful psychological impact on human beings. We may think that we are simply just listening to a song, but there’s much more to it than that. Research shows that the brain produces brainwaves from music with a strong and defining beat, and those brainwaves determine our level of concentration and alertness, according to an article in the psychological health magazine Complete Wellbeing. Research has also shown that listening to classical music slows down your heart and breathing rate, which is why we listen to classical music while relaxing.

The Neuroscience of Music, Mindset, and Motivation.