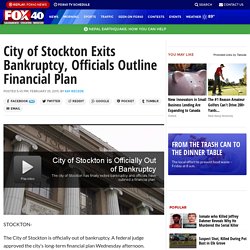 A federal judge approved the city’s long-term financial plan Wednesday afternoon. Out of bankruptcy means the city can now focus on refunding essential programs but new ones will have to go through some serious hoops. “The reality is, no matter how compelling an item is, we can only afford what we can afford,” City Manager Kurt Wilson explained. Wilson told FOX40 — the Federal Judge in their bankruptcy case just approved their plan for financial stability. Wilson said they had to prove that they would be financially stable for decades and would not return to the red. 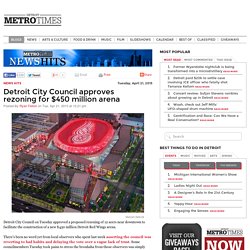 There's been no word yet from local observers who spent last week asserting the council was reverting to bad habits and delaying the vote over a vague lack of trust. Some councilmembers Tuesday took pains to stress the brouhaha from those observers was simply that: brouhaha. “Each and every one of these council members has to do what we were put in charge legislatively to do," Councilman James Tate said. Tate was referring to the delays — one from Olympia Development of Michigan, the real estate arm of Red Wings owner Ilitch Holdings Inc. last year; two others by Detroit City Council — on the vote to address what would come of two historic hotels near the arena, the Eddystone and Park Avenue Hotel.

You couldn't say no to Bobby Ferguson, city contractor testifies in Detroit corruption trial. Detroit Council Member Pleads Guilty to Accepting Bribes for Vote. Money for political candidates: Where does it come from? Where d. M.L. 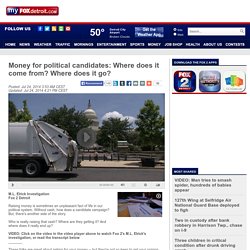 Elrick Investigation Fox 2 DetroitRaising money is sometimes an unpleasant fact of life in our political system. Without cash, how does a candidate campaign? But, there's another side of the story. Who is really raising that cash? Where are they getting it? These folks are great about asking for your money -- but they're not so keen to get your opinion. These Washington money men make their living off political contributions, many of them from retirees and senior citizens who have no idea just how little of their hard-earned money ends up going to the candidates and causes they believe in. ELRICK TO MACKENZIE: Are you preying on the elderly? For more than a decade Scott Mackenzie, Base Connect and their partners have raised millions for candidates like Rocky Raczkowski of Michigan and tens of millions for causes like the Conservative Strikeforce and Black Republican PAC.

The issue isn't their political views, it's what happens to the money. RACZKOWSKI: We shut down that campaign. How is Federal Housing Money is Spent in Detroit? The federal government provides $37 million annually to Detroit for housing programs that help stabilize life for people, according to Arthur Jemison. 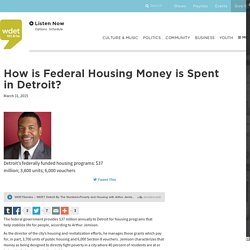 As the director of the city’s housing and revitalization efforts, he manages those grants which pay for, in part, 3,700 units of public housing and 6,000 Section 8 vouchers. Jemison characterizes that money as being designed to directly fight poverty in a city where 40 percent of residents are at or below the federal poverty threshold. He speaks with WDET’s Sandra Svoboda about the funds, how they’re used and how they’re part of Mayor Mike Duggan’s strategies for fighting poverty. Jemison also raises the related issue of how home ownership helps people accumulate wealth, and why that’s important to the region’s economic situation.

The audio of their conversation is above. Describe the situation related to household income in the city of Detroit. Not only is it a matter of income. Tell me a little bit more about the federal programs. Detroit taxes high, but spending is higher -study. Detroit Corruption. Thousands go without water as Detroit cuts service for nonpayment. It has been six weeks since the city turned off Nicole Hill's water. 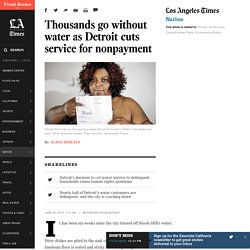 Dirty dishes are piled in the sink of her crowded kitchen, where the yellow-and-green linoleum floor is soiled and sticky. A small garbage can is filled with water from a neighbor, while a bigger one sits outside in the yard, where she hopes it will collect some rain. She's developed an intricate recycling system of washing the dishes, cleaning the floor and flushing the toilet with the same water. "It's frightening, because you think this is something that only happens somewhere like Africa," said Hill, a single mother who is studying homeland security at a local college. Former Detroit Mayor Kwame Kilpatrick, Contractor Bobby Ferguson, and Bernard Kilpatrick Sentenced on Racketeering, Extortion, Bribery, Fraud, and Tax Charges. 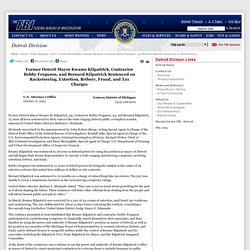 Kilpatrick, 43; contractor Bobby Ferguson, 44; and Bernard Kilpatrick, 72, have all been sentenced for their roles in the wide-ranging Detroit public corruption scandal, announced United States Attorney Barbara L. McQuade. McQuade was joined in the announcement by John Robert Shoup, Acting Special Agent In Charge of the Detroit Field Office of the Federal Bureau of Investigation; Randall Ashe, Special Agent in Charge of the U.S.