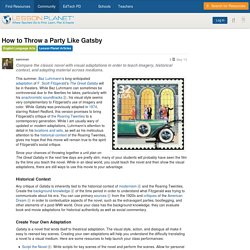 Scott Fitzgerald’s The Great Gatsby will be in theaters. While Baz Luhrmann can sometimes be controversial due to the liberties he takes, particularly with his anachronistic soundtracks2, his visual style seems very complementary to Fitzgerald’s use of imagery and color. While Gatsby was previously adapted in 1974, starring Robert Redford, this version promises to bring Fitzgerald’s critique of the Roaring Twenties to a contemporary generation. While I am usually wary of updated or modern adaptations, Luhrmann’s attention to detail in his locations and sets, as well as his meticulous attention to the historical context of the Roaring Twenties, gives me hope that this movie will remain true to the spirit of Fitzgerald’s social critique. Historical Context Any critique of Gatsby is inherently tied to the historical context of modernism3 and the Roaring Twenties.

Create Your Own Adaptation Compare Images and Mediums. Reading Journal: Songs from The Great Gatsby. I have tracked down the songs Fitzgerald alludes to in The Great Gatsby: "The Love Nest" (1920), "Sheik of Araby" (1921), "Ain't We Got Fun? 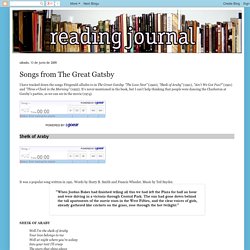 Ain't we got fun? F-scott-fitzgerald-the-great-gatsby-chapter-v-annotated. When I came home to West Egg that night I was afraid for a moment that my house was on fire. 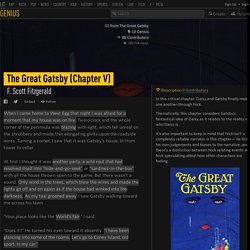 Two o’clock and the whole corner of the peninsula was blazing with light, which fell unreal on the shrubbery and made thin elongating glints upon the roadside wires. Turning a corner, I saw that it was Gatsby’s house, lit from tower to cellar. At first I thought it was another party, a wild rout that had resolved itself into “hide-and-go-seek” or “sardines-in-the-box” with all the house thrown open to the game.

But there wasn’t a sound. Only wind in the trees, which blew the wires and made the lights go off and on again as if the house had winked into the darkness. “Your place looks like the World’s Fair,” I said. “Does it?” “It’s too late.” “Well, suppose we take a plunge in the swimming-pool? “I’ve got to go to bed.” “All right.” He waited, looking at me with suppressed eagerness. “I talked with Miss Baker,” I said after a moment. “Oh, that’s all right,” he said carelessly. “Not very much.” 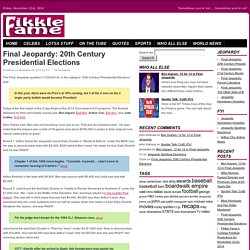 The finalists (followed by their semi-finals scores) are: Ben Ingram $29,800: Arthur Chu, $25,601; and Julia Collins, $16,500. Alex Trebek said “Ben was not mouthing I love you to me. Round 1: Arthur found the Jeopardy! Arthur finished in the lead with $8,400. Round 2: Julia found the first Daily Double in “Initials to Roman Numerals to Numbers II” under the $1,600 clue. Julia found the last Daily Double in “Paint by Years” under the $1,600 clue. Arthur finished in the lead with $25,600. Only ONE of the contestants got Final Jeopardy! “By 1920, World War I was over…. Ben got it right and doubled his score. Tags: arthur, ben, jeopardy, julia. Final Jeopardy: 20th Century Presidential Elections