7 Free Edmodo Apps to Try This Summer. Chalkup - Grade Assignments in Google Apps for Edu Without Using Scripts. Edmodo Co Founder Explains Top 10 Edmodo Store Offerings. Edmodo--created by two school district IT professionals--offers a social network for students, teachers, parents and schools. As well as providing a connecting tool for communication, questions and tracking progress, Edmodo began to offer a marketplace in 2012 as a way to bring more educational content to the educators and students using the platform. The Edmodo Store now boasts over 600 apps spanning a diversity of subject areas. EdSurge caught up with Nic Borg, co-founder and chief product officer of Edmodo, to hear about what resources Edmodo provides to educators, some of the most popular offerings in the Edmodo Store and surprising ways that teachers have used the platform to address their own particular classroom needs. 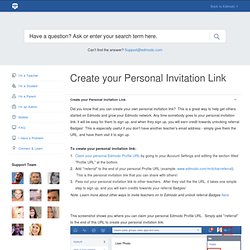 This is a great way to help get others started on Edmodo and grow your Edmodo network. Any time somebody goes to your personal invitation link, it will be easy for them to sign up, and when they sign up, you will earn credit towards unlocking referral Badges! This is especially useful if you don't have another teacher's email address - simply give them the URL, and have them visit it to sign up. Edmodo Snapshot - Quickly Create Common Core-aligned Assessments. 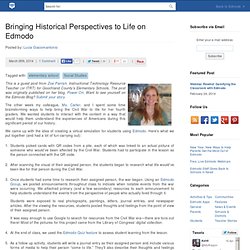 The post was originally published on her blog, Power On. Want to see yourself on the Edmodo Blog? Submit your story. The other week my colleague, Ms. Flashcards By Course Hero by Course Hero, Inc. Unleash the Power of Positivity With StoryLines Pages. Tagged with: Appselementary schoolStorylines Looking for a great end-of-year activity for your classroom? 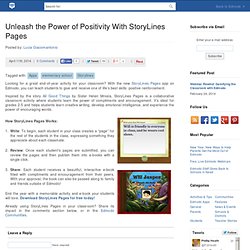 With the new StoryLines Pages app on Edmodo, you can teach students to give and receive one of life’s best skills: positive reinforcement. Inspired by the story All Good Things by Sister Helen Mrosla, StoryLines Pages is a collaborative classroom activity where students learn the power of compliments and encouragement. It’s ideal for grades 2-5 and helps students learn creative writing, develop emotional intelligence, and experience the power of encouraging words. How StoryLines Pages Works: Write: To begin, each student in your class creates a “page” for the rest of the students in the class, expressing something they appreciate about each classmate.Review: Once each student’s pages are submitted, you can review the pages and then publish them into e-books with a single click. Discover. A Guide to Getting Started With Edmodo. Whether you’re new to Edmodo or you’ve been a part of community for some time, we want you to make the most your Edmodo experience. 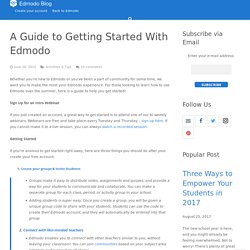 For those looking to learn how to use Edmodo over the summer, here is a guide to help you get started! Sign Up for an Intro Webinar If you just created an account, a great way to get started is to attend one of our bi-weekly webinars. Webinars are free and take place every Tuesday and Thursday – sign up here. Tips & Tricks: Powering Up Your Edmodo Network, Part Three. Store. Tips & Tricks: Powering Up Your Edmodo Network, Part One. Edmodo. 5 Steps for Using the New Curriculet App in Edmodo. Teachers who use Edmodo are familiar with the app store that allows you to integrate a number of great resources into the work your students are doing in groups. 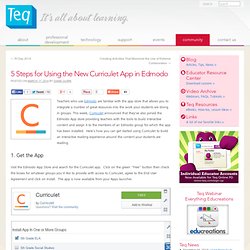 This week, Curriculet announced that they’ve also joined the Edmodo App store providing teachers with the tools to build interactive content and assign it to the members of an Edmodo group for which the app has been installed. Here’s how you can get started using Curriculet to build an interactive reading experience around the content your students are reading. 1. Get the App Visit the Edmodo App Store and search for the Curriculet app. 2. When you choose Curriculet from the Apps Launcher, you’re automatically logged into the app. When you visit the Store, you’ll see a few sample texts to get an idea of how curriculets work. In the Library, you have the option of also adding your own content. The Assignments tab will show all of the content you’ve assigned to students by class. 3.

Parents: The Missing Ingredient in K-12 Success  As educators, we talk a lot about the role of teachers in the lives of students and debate the best ways to strengthen the classroom experience for students from all backgrounds. There is only so much a teacher can do, though, particularly with large class sizes and limited resources. Even teachers in the best of circumstances are limited when it comes to hours in the day and the amount of material that must be covered. As K-12 academic standards become more rigorous, parents are becoming an even more integral piece of a student's success. The timing couldn't be worse though, from a cultural standpoint. A report released in February by Stanford University that found that the number of U.S. households with two working parents nearly doubled from 25 percent in 1968 to 48 percent in 2008, and that doesn't even factor in parents who have part-time jobs, health issues or other children that vie for their time.

The parental difference. Edmodo: Great for Exit Tickets and Other Formative Assessment! I have been using Edmodo now for two full years with my students, and I love it. 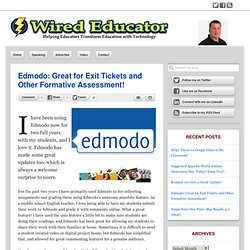 Edmodo has made some great updates too, which is always a welcome surprise to users. For the past two years I have primarily used Edmodo to for collecting assignments and grading them using Edmodo’s awesome annotate feature. As a middle school English teacher, I love being able to have my students submit their work to Edmodo and grade it with comments online. What a great feature! Great Formulas for Common Core Math Prep. Using Edmodo Polls to Run a March Madness Tournament. Tagged with: elementary schoolMarch MadnessSocial Studies This post is part of our Edmodo Spotlight series which highlights Edmodo teachers, schools and districts. 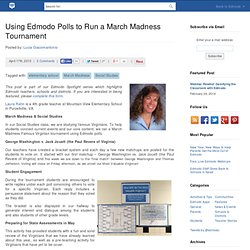 If you are interested in being featured, please complete this form. Laura Rahn is a 4th grade teacher at Mountain View Elementary School in Purcellville, VA. March Madness & Social Studies In our Social Studies class, we are studying famous Virginians. George Washington v. 5 Tips for Parents Getting Started with Edmodo. Tagged with: Parents Parent accounts are a great way for parents to observe and stay up to date with their child’s Edmodo activities. 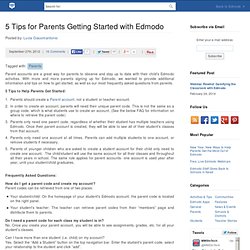 With more and more parents signing up for Edmodo, we wanted to provide additional information and tips on how to get started, as well as our most frequently asked questions from parents. 5 Tips to Help Parents Get Started: Parents should create a Parent account, not a student or teacher account.In order to create an account, parents will need their unique parent code. This is not the same as a group code, which is what students use to create an account. Frequently Asked Questions: New Year, New Ways to Help Parents Get the Most Out of Edmodo. Parent Accounts make it easy to keep parents up-to-date on their child’s school activity, including assignments, grades, upcoming events, and more. 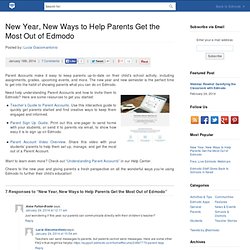 The new year and new semester is the perfect time to get into the habit of showing parents what you can do on Edmodo. Need help understanding Parent Accounts and how to invite them to Edmodo? Here are some resources to get you started: How to Add Free Apps to Your Edmodo Group. I recently received an email from a someone who has just started to explore possibly using Edmodo with her students next fall. 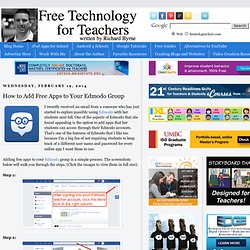 One of the aspects of Edmodo that she found appealing is the option to add apps that her students can access through their Edmodo accounts. That's one of the features of Edmodo that I like too because I'm a big fan of not requiring students to keep track of a different user name and password for every online app I want them to use.

Store. Are you using Edmodo? Quizzes: Tips & Tric. Edmodo Quizzes: Tips & Tricks. Edmodo's quiz feature is a versatile tool that saves teachers time. Whether used for quick informational checks or unit tests, the quiz feature enables teachers to assign formative and summative assessments with ease. I use Edmodo Quizzes for assessing students' knowledge acquisition, practicing PARCC related digital literacy skills, and demonstrating students' application of knowledge learned through out the marking period. I will never grade a multiple choice quiz/test by hand ever again, and Edmodo quizzes provide a paperless way for me to easily read and score open ended, paragraph responses.

Formative Chunks When my students are learning large amounts of information such as vocabulary words or types of literary devices, I break the list up into smaller chunks and assign quick, no more than 8 questions quizzes. A note about fill-in-the-blank, you may run into issues with misspellings or students not providing the exact phrase/word. Getting students fired up for Edmodo chat. Tomorrow starts our first day of scientific argumentation on de-extinction. Students have read 3 background articles and watched several short video clips as well as spent some classtime discussing their ideas and position on the question Should scientists bring back extinct species? It's a great question, isn't it? Clearly an issue that will confront these students as they age into adults.

15 Things You Can Do With Edmodo & How To Get Started. Edmodo. November 2016 Sometimes it is easier to annotate an Assignment to give your feedback rather than writing lengthy comments. It is now possible to Annotate a Student Assignment through Office Online. Check it out here! September 2016 You can now add Spotlight Apps to your App Launcher. July 2016 Notes that you send to your Groups will automatically populate in the Posts sections of the Parent account! June 2016. Top 13 of 2013: The Year in Edmodo Apps. It’s been a year since the Edmodo Store was made available to all US-based teachers, and over the past twelve months, we’ve added more than 500 apps! From interactive educational games, to content creation tools and Common Core apps, there’s something for every grade level and subject area.

To commemorate the anniversary of the Edmodo Store and the end of 2013, check out our top app lists: Cofounder Nic Borg Named to Forbes “30 Under 30” Edmodocon 2013. Tips & Tricks: Safeguarding Your Groups. Edmodo. Back to School with Edmodo: Quick Guides. Edmodo. 1. Assessments. Welcome to Forbes. 2013 Year in Review, All in Rhyme (Just for You) Tagged with: holidays Check out the amazing year we’ve had together with this holiday-themed poem that highlights how you’ve helped bring joy to our world over the past twelve months! Twas the night before break, when all through the halls Not a student was stirring, because they were all at malls. The grades had been entered by the teachers with care, For it was the last thing required to be free from there. As teachers got nestled in their comfortable beds, The realization they could sleep in entered their heads. No more alarm clocks, or getting dressed in a snap; Over holiday break, they could take nap after nap.

Soon each teacher was dreaming and remembering what they’d done; Thinking about all the past year’s lessons, created one-by-one.Edmodo helped them do it, in what seemed like a flash. Groups were created, one for each class; Students were invited and joined en masse. 10 Reasons Why Edmodo is an Excellent (and Hugely Popular) Digital Learning Platform. I’ve been aware of Edmodo and respected its capabilities and popularity for a few years now, but recently my appreciation for this application’s utility and significance has really grown. During the recent Teaching and Learning with the iPad conference, we used it for sharing presentation content and more, and this gave me an opportunity to spend more time with it.

I couldn’t help but notice how popular it was with conference participants, many of whom were already users and advocates. Edmodo codes.

Related:  Gender III   -  A Guide to Getting Started With Edmodo   -  Education   -  Enterprise