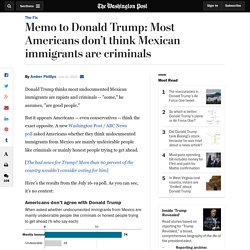 " But it appears Americans -- even conservatives -- think the exact opposite. A new Washington Post / ABC News poll asked Americans whether they think undocumented immigrants from Mexico are mainly undesirable people like criminals or mainly honest people trying to get ahead. How does Obama get along with Latin America?

The diplomatic thaw between the US and Cuba has been the key issue in the run-up to this year's Summit of the Americas in Panama. 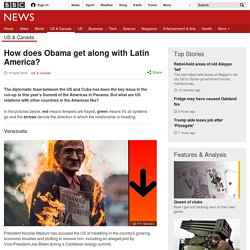 But what are US relations with other countries in the Americas like? In the pictures below, red means tempers are frayed, green means it's all systems go and the arrows denote the direction in which the relationship is heading. Venezuela Image copyright Getty Images. Trump's Nafta threats would severely harm US, Mexican chief negotiator says. Donald Trump’s pledge to rip up existing trade deals with Mexico would inflict substantial damage on the US economy and kill the region’s competitiveness on the world stage, according to the Mexican economist who led the country’s trade talks with the US. 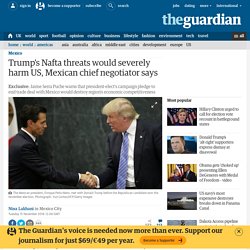 In an exclusive interview with the Guardian, Jaime Serra Puche, Mexico’s chief negotiator during the North American Free Trade Agreement (Nafta) negotiations, said scrapping the treaty and introducing protectionist measures as touted by the president-elect would amount to the US “shooting itself and the region in the foot”. “The degree of integration within North America has increased dramatically since Nafta 20 years ago, to the point where we’re not only trading with each other, but now producing many things together.

Trump’s shock victory threw the Mexican markets into turmoil last week, causing the peso to nosedive while Mexican stocks suffered their steepest fall in five years. The U.S. And Mexico In A Trump Administration. Why the Status Quo with Mexico Isn't Working. Aside from Hillary Clinton, the biggest loser in our presidential election was Mexico. 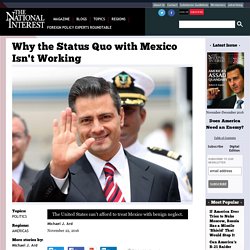 In the winning campaign narrative, the United States exports jobs to Mexico, and Mexico exports poverty and crime to the United States, casting our relations with Mexico in zero-sum terms. If Mexico is gaining, the United States must be losing; an unfair characterization, but to many Americans, not without an element of truth. US-Mexico relations uncertain after presidential election. SAN ANTONIO - As former deputy director of U.S.

Immigration and Customs Enforcement Alonzo Pena said, the Donald Trump presidency could have “a chilling effect on the growth of Mexico’s economy.” “Companies from all over the world are going to be hesitant to invest in a country that they have no certainty that the economic engine is going to grow,” Pena said. Pena said as it is, the Mexican peso dropped in value after Trump was elected. Besides oil prices not being what they once were for Pemex, Mexico’s oil monopoly, Pena said the country would have to somehow absorb perhaps millions of undocumented immigrants who may be deported. 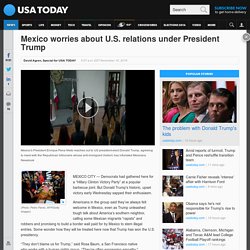