It Happened to Me: I Was The Easy Fat Chick. Photograph by Liora K I remember the exact moment that the concept of someone finding me attractive became even a remote possibility. 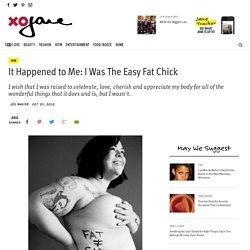 I was 20 years old (TWENTY), talking to a friend when they said with a snicker, “Can you believe Henry thinks you’re hot?!?” This sentence came to me as a question because “Henry” was not one to be flattered by. He didn't have girls lining up to date him and he didn't possess any qualities of a good catch, but these details were lost on me. I was still shocked and stunned by the fact that ANY homosapien on this planet would find my body attractive. Growing up, I felt so desexualized that the promise of any sort of physical appreciation was inconceivable, even in my future. Dun dun DUN! How One Woman's Body Was Photoshopped to Meet 18 Different "Ideal" Beauty Standards.

Courtesy Superdrug Online Doctor People always say that perceptions of beauty vary widely from one country to the next, but just how different can those views really be? 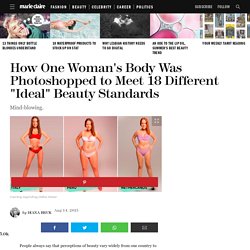 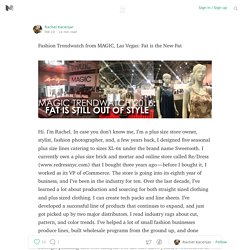 I’m Rachel. In case you don’t know me, I’m a plus size store owner, stylist, fashion photographer, and, a few years back, I designed five seasonal plus size lines catering to sizes XL-6x under the brand name Sweetooth. I currently own a plus size brick and mortar and online store called Re/Dress (www.redressnyc.com) that I bought three years ago — before I bought it, I worked as its VP of eCommerce. The store is going into its eighth year of business, and I’ve been in the industry for ten.

Time for a New Year's Revolution: How Diet Culture Upholds Capitalism. MELISSA A. 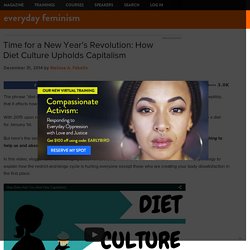 FABELLO: To those of you who complain about my socialist, anti-heteropatriarchal dogma ruining the lives of children everywhere, you’re gonna love this one. 3 Tips to Help Deal with Fat Shame from a Healthcare Professional. Hello, and welcome to Ask Golda! 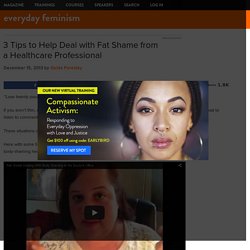 I’m Golda Poretsky from Body Love Wellness, and I’m here to answer your questions about health at every size, body image, intuitive eating, whatever you need. I’m a health coach who specializes in working with plus-­‐size women on food and body image issues. So, this week’s question is from Christine, and she wants to know how to respond to a body-­shaming health professional. And this is a huge issue in the fat positive community, body positive community.

Special Report: Fat Patients & Medical Care - Virgie Tovar: Lose Hate Not Weight. I Had Cancer – And Medical Fat-Shaming Could Have Killed Me. You will not lose 1lb every time you create a deficit of 3,500 calories. The myth “To lose one pound of fat you need to create a deficit of 3,500 calories” is actually worse than a myth – it is one of the cruellest lies we have told desperate dieters. 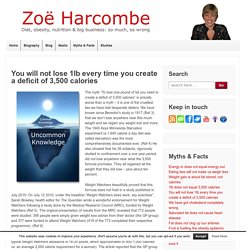 We have known since Benedict’s study in 1917 (Ref 3) that we don’t lose anywhere near this much weight and we regain any weight lost and more. The 1945 Keys Minnesota Starvation experiment (a 1,600 calorie a day diet was called starvation) was the most comprehensively documented ever. (Ref 4) He also showed that his 36 subjects, rigorously studied in confinement over a one year period, did not lose anywhere near what the 3,500 formula promises. They all regained all the weight that they did lose – plus about ten percent. The study was a year in length and the likely deficit was at least 1,000 calories per day (a typical Weight Watchers allowance is 18-20 points, which approximates to 900-1,000 calories vs. an average 2,000 calorie requirement for a woman).

Ref 3: Francis G. Ref 7: Marion J. Fattitude. 6 Ways I Was Taught to Be a Good Fatty (And Why I Stopped) When You Learn to Hate Your Body from Your Own Family. Studyguide 241. Tips For Flying While Fat. I was surprised (but only kinda) at the responses that appeared on my Facebook page and Instagram when I recently posted a picture of my lap on a plane with the caption “Not all seat belts are the same length, and today finally needed to request a seat belt extender. 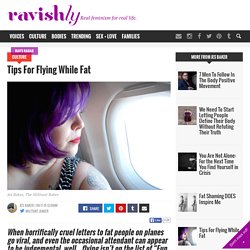 Here's the worst thing that happened: I was comfortable.” What followed was a flood of comments confessing the terror that plus size people feel when they contemplate boarding a plane. They shared the shame that accompanies the side eye, the fit of the seat, the unpredictability of the seat belt length...the list goes on and on. And I GET IT. When horrifically cruel letters to fat people on planes go viral, and even the occasional attendant can appear to be judgemental, well, flying isn’t on the list of “Fun Things Fat People Can Do.”

Fat Shaming DOES Inspire Me. My (stolen and super altered) fan art! 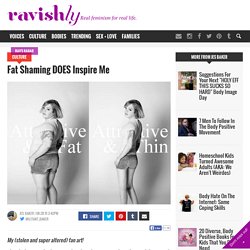 I’m sure by now you’ve seen someone somewhere post something about a site that seeks “to inspire” all fat people to become smaller and thus obviously: happy, healthy, and finally helpful members of society (eye roll). No, I’m not going to boost their signal, name them, or share them and you can click here for why. BODIES AREN'T UGLY, BULLYING IS: WHAT AUTOCOMPLETE WILL TELL YOU ABOUT FAT HATE AND WHY IT NEEDS TO STOP - The Militant Baker. Fat politics are near and dear to my heart, not only because I'm quite the fatty myself, but also because all body inequality has a lasting effect on every single person involved. 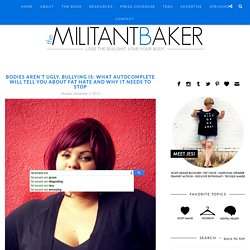 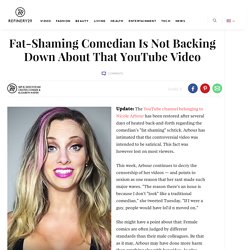 Arbour has intimated that the controversial video was intended to be satirical. This fact was however lost on most viewers. This week, Arbour continues to decry the censorship of her videos — and points to sexism as one reason that her rant made such major waves. "The reason there's an issue is because I don't "look" like a traditional comedian," she tweeted Tuesday. She might have a point about that: Female comics are often judged by different standards than their male colleagues. The comedian seems to be handling the criticism well enough. This story was originally published on September 7, 2015 at 5:45 p.m. This weekend, YouTube symbolically drew a line in the sand about fat-shaming. Being Thin Didn't Make Me Happy, But Being 'Fat' Does. (Content Warning: Discussion of Weights and Calories) Originally published on Ravishly and republished here with the writer’s permission. The Militant Baker. Zimbra Web Client Sign In.

WHY PEOPLE HATE TESS MUNSTER (AND OTHER HAPPY FAT PEOPLE) Unless you're someone who refuses to use social media, I'm sure you're aware that plus-size model Tess Munster/Holliday has rocked people's worlds by becoming the first model 'of her size' signed to an agency. Her size being: 5'5" and a size 22, which is a far cry from the industry's standard of having traditionally hourglass-y figures that are a size 10. Plus models never wear above a 16/18, and are usually 5'8" or taller. Guys... Tess is super short and super fat and breaking all the motherfucking rules like the superhero she is.But changing the status quo is anything but easy. If I ever want to mourn humanity, all I have to do is scroll through Tess's Instagram comments. For years, this vitriol has left me puzzled and asking: WHY is this happening?

Because: that bitch just broke the rules. "Fat” is just the current catchall word for all the things that we as a culture are afraid of: women’s rights, people refusing to acquiesce to cultural pressures of conformity, fear of mortality. Eating Disorder Recovery Advocacy Is Usually Fatphobic – Here Are 4 Ways to Start Fixing That. Recently, I had what felt like an awesome idea. I had gone to bed at night, feeling really overwhelmed about how full I felt, about how bloated I was. And that, very quickly, translated in my eating disordered mind into “I ate too much.” Whatever that means. So as I lay there in my discomfort, trying to quiet the thoughts enough to fall asleep, I remembered something that soothed me: A few times, I’ve seen Tumblr posts that address this issue exactly – in the form of three-paneled pictures of women from side view angles showing how different their stomachs look upon waking, after lunch, and then after dinner.

The entire point of those posts is to normalize how our bellies grow and expand to hold food, to remind us that our bodies are wonderfully adaptive and take care of us. And remembering that did, indeed, help me sleep. And when I woke up in the morning, I thought it might be a good idea to do one of these memes, too. Melissa A. Fabello.