Radical Neurodivergence Speaking: Hackathon "for Autism" with no Autistics? Guest post. This is a guest post from T in regards to the Bing Fund autism hackathon in Seattle this March. 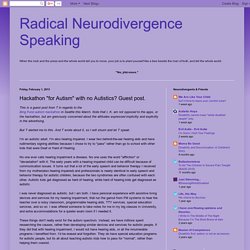 Note that I, K, am not opposed to the apps, or the hackathon, but am greivously concerned about the attitudes expressed implicitly and explicitly in the advertising.But T alerted me to this. And T wrote about it, so I will shush and let T speak. I'm an autistic adult. I'm also hearing impaired. I wear two behind-the-ear hearing aids and have rudimentary signing abilities because I chose to try to "pass" rather than go to school with other kids that were Deaf or Hard of Hearing.

No one ever calls hearing impairment a disease. I was never diagnosed as autistic. but I am both. These things don't really exist for the autism spectrum. That is the experience of autistic people today. But it is done for autistic people, because we can't be trusted to represent ourselves, or our needs. The primary tool for the enforcement of help is... The Trouble with Do-Gooders, by Billy Golfus. It took me years to process--like they say-- what had happened. 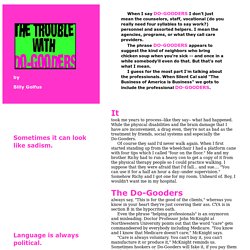 While the physical disabilities and the brain damage that I have are inconvenient, a drag even, they're not as bad as the treatment by friends, social systems and especially the Do-Gooders. Of course they said I'd never walk again. When I first started standing up from the wheelchair I had a platform cane with four tips which I called "four on the floor. " Me and my brother Richy had to run a heavy con to get a copy of it from the physical therapy people so I could practice walking. I suppose that they were afraid that I'd fall... and sue.... Beasts and Super-Beasts/The Philanthropist and the Happy Cat.

Jocantha Bessbury was in the mood to be serenely and graciously happy. 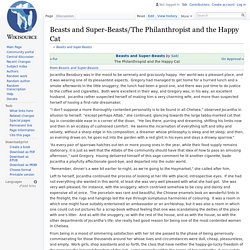 Her world was a pleasant place, and it was wearing one of its pleasantest aspects. Gregory had managed to get home for a hurried lunch and a smoke afterwards in the little snuggery; the lunch had been a good one, and there was just time to do justice to the coffee and cigarettes. Both were excellent in their way, and Gregory was, in his way, an excellent husband. Jocantha rather suspected herself of making him a very charming wife, and more than suspected herself of having a first-rate dressmaker.

“I don’t suppose a more thoroughly contented personality is to be found in all Chelsea,” observed Jocantha in allusion to herself; “except perhaps Attab,” she continued, glancing towards the large tabby-marked cat that lay in considerable ease in a corner of the divan. “Remember, dinner’s a wee bit earlier to-night, as we’re going to the Haymarket,” she called after him. But then he had killed his sparrow. You're the detective: who in these photos is the person in charge? Do-gooderism: Links, quotes, and discussion.

I’ve been threatening this post for a long time, so here it is. ;-) Several other posts have alluded to things in this post, but I’ve finally written it. 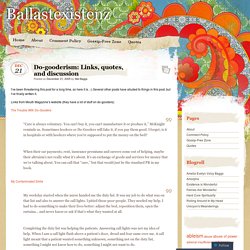 Links from Mouth Magazine’s website (they have a lot of stuff on do-gooders): The Trouble With Do-Gooders “Care is always voluntary. You can’t buy it, you can’t manufacture it or produce it,” McKnight reminds us. Sometimes hookers or Do-Gooders will fake it, if you pay them good. My Contaminated Smile My workday started when the nurse handed me the duty list. The Great Wooster High School French Fry Conspiracy On March 21, 2000, Brianna advised me that the teacher with the french fry issues, Ms. (The student described in the above article then faced retaliation that is described at the bottom of this page.) Safety Is Dangerous One of my best friends is a safety engineer who periodically goes on a prolonged rant about do-gooder safety.

Other Links: The Danger of Do-Gooders Hell-Bent on Helping: Benevolence, Friendship and the Politics of Help. Radical Neurodivergence Speaking: The helper personality scares me... Some of the scariest people I have ever met are people in helping professions. 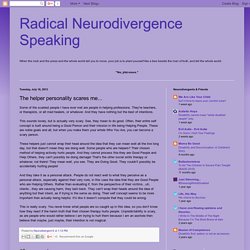 They're teachers, or therapists, or alt med healers, or whatever. And they have nothing but the best of intentions. This sounds lovely, but is actually very scary. See, they mean to do good. Often, their entire self concept is built around being a Good Person and their mission in life being Helping People. These helpers just cannot wrap their head around the idea that they can mean well all the live long day, but that doesn't mean they are doing well.