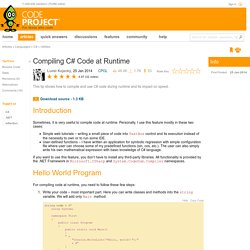 Personally, I use this feature mostly in these two cases: Simple web tutorials – writing a small piece of code into TextBox control and its execution instead of the necessity to own or to run some IDE.User-defined functions – I have written an application for symbolic regression with simple configuration file where user can choose some of my predefined functions (sin, cos, etc.). The user can also simply write his own mathematical expression with basic knowledge of C# language.

If you want to use this feature, you don’t have to install any third-party libraries. Hello World Program For compiling code at runtime, you need to follow these few steps: And that’s it. User-defined Functions As I mentioned in the Introduction, I use this feature for runtime defining mathematical expressions. This is very similar to the previous example (it’s assumed that parameters of the function are named x and y).

Using the UV Sphere to Make a Rainy Window. Making the Rain Drops Delete the default cube and lamp, and replace with a plane rotated at 90 degrees. 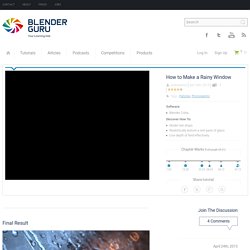 Position the camera front on to the plane. 10 Ways to Improve the Performance of Your WPF Application. Introduction Windows Presentation Foundation (WPF) applications tend to be slower on lower end machines or on machines without graphic acceleration devices. 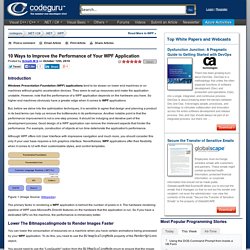 They seem to eat up resources and make the application unstable. However, note that the performance of a WPF application depends on the hardware you have. So higher end machines obviously have a greater edge when it comes to WPF applications. But, before we delve into the optimization techniques, it is sensible to agree that design and planning a product in its best terms can help us remove the bottlenecks in its performance. Although WPF offers rich User Interface with impressive navigation and much more, you should consider this only if your user base requires a rich graphics interface. Figure 1 (Image Source: Wikipedia) The primary factor in rendering a WPF application is behind the number of pixels in it.

Lower The Bitmapscalingmode to Render Images Faster. Helix-toolkit/helix-toolkit. Xamarin Evolve 2013: Crafting Interactions with Core Animation. SCALA CONTENT MANAGER. A Versatile TreeView for WPF. Introduction I was recently working on a WPF project, and it was all about data editing and synchronization. 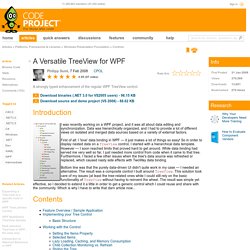 Data was hierarchically organized, and I had to provide a lot of different views on isolated and merged data sources based on a variety of external factors. First of all: I 'love' data binding in WPF — it just makes a lot of things so easy! Yet another Web Camera control. Introduction In this article you will find yet another implementation of a web camera control. 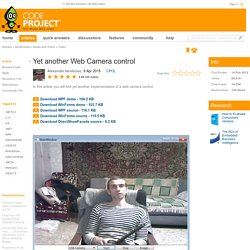 The control is a simple and easy to use one: no additional dependencies and a minimalistic interface. The control provides the following functionalities: Gets a list of available web camera devices on a system. Displays a video stream from a web camera device. Requirements The WinForms version of the control is implemented using .NET Framework 2.0. [Webinar Recording] Software 5.0 Release. Interactive Customer Experience Summit.

New interactive map aims to make King's Island visits more fun. Rebecca Minkoff debuts first interactive store. Luxury fashion brand Rebecca Minkoff opened the doors to its second U.S. store this week in SoHo, New York City, and according to the company, the store aims to pair some of the best features of online shopping with a traditional bricks-and-mortar experience. 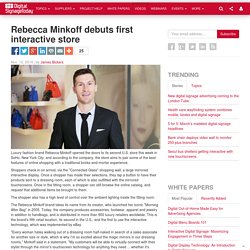 Shoppers check in on arrival, via the "Connected Glass" shopping wall, a large mirrored interactive display. Once a shopper has made their selections, they tap a button to have their products sent to a dressing room, each of which is also outfitted with the mirrored touchscreens. Once in the fitting room, a shopper can still browse the online catalog, and request that additional items be brought to them. The shopper also has a high level of control over the ambient lighting inside the fitting room. The Rebecca Minkoff brand takes its name from its creator, who launched her iconic "Morning After Bag" in 2005. . / James Bickers is the senior editor of Retail Customer Experience, and also manages webinars for Networld Media Group. New digital signage advertising coming to the London Tube. Exterion Media, formerly CBS Outdoor International, is set to launch its own summer blockbuster with a new digital signage ad platform coming to the London Underground. 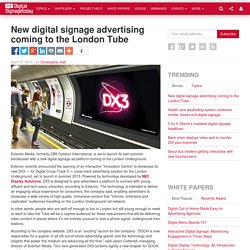 Exterion recently announced the opening of an interactive "Innovation Centre" to showcase its new DX3 — for Digital Cross-Track 3 — cross-track advertising solution for the London Underground, set to launch in summer 2015. Powered by technology developed by NEC Display Solutions, DX3 is designed to give advertisers a platform to connect with young, affluent and tech-savvy urbanites, according to Exterion. The technology is intended to deliver an engaging visual experience for consumers, the company said, enabling advertisers to showcase a wide variety of high quality, immersive content that "informs, entertains and captivates" audiences travelling on the London Underground rail network.

According to the company website, DX3 is an "exciting" launch for the company. Total inventory of U.K. New digital signage advertising coming to the London Tube.