Offshore Drilling Accounts For 10% Of Total US Oil Production. Oil. 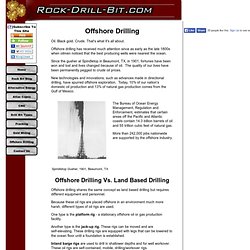 Black gold. Crude. That's what it's all about. Offshore drilling has received much attention since as early as the late 1800s when oilmen noticed that the best producing wells were nearest the ocean. Since the gusher at Spindletop in Beaumont, TX, in 1901, fortunes have been won and lost and lives changed because of oil. New technologies and innovations, such as advances made in directional drilling, have spurred offshore exploration. Offshore Drilling Vs. Offshore drilling shares the same concept as land based drilling but requires different equipment and personnel.

Because these oil rigs are placed offshore in an environment much more harsh, different types of oil rigs are used. One type is the platform rig - a stationary offshore oil or gas production facility. Another type is the jack-up rig. Inland barge rigs are used to drill in shallower depths and for well workover. The costs are high. Drilling Techniques Return from Offshore Drilling to Homepage. PDC bit classification - Bit classification allows efficient selection and use of polycrystalline diamond compact (PDC) and diamond drill bit. 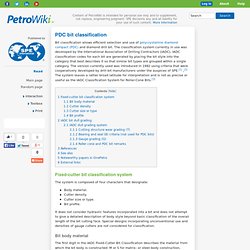 The classification system currently in use was developed by the International Association of Drilling Contractors (IADC). IADC classification codes for each bit are generated by placing the bit style into the category that best describes it so that similar bit types are grouped within a single category. The version currently used was introduced in 1992 using criteria that were cooperatively developed by drill-bit manufacturers under the auspices of SPE.[1] ,[2] The system leaves a rather broad latitude for interpretation and is not as precise or useful as the IADC Classification System for Roller-Cone Bits.[3] Fixed-cutter bit classification system The system is composed of four characters that designate: Body material. Bit body material Cutter density The second IADC classification character is a digit that represents the density of cutting elements. Cutter size or type. PDC drill bits - Polycrystalline diamond materials, for use in polycrystalline diamond compact (PDC) bits, are one of the most important material advances for oil drilling tools in recent years. 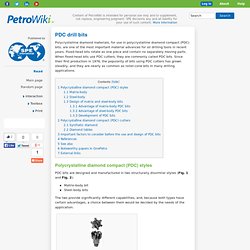 Fixed-head bits rotate as one piece and contain no separately moving parts. When fixed-head bits use PDC cutters, they are commonly called PDC bits. Since their first production in 1976, the popularity of bits using PDC cutters has grown steadily, and they are nearly as common as roller-cone bits in many drilling applications. Polycrystalline diamond compact (PDC) styles PDC bits are designed and manufactured in two structurally dissimilar styles (Fig. 1 and Fig. 2): Matrix-body bit Steel-body bits The two provide significantly different capabilities, and, because both types have certain advantages, a choice between them would be decided by the needs of the application. Matrix-body Matrix is relatively heterogeneous, because it is a composite material. Steel-body Steel is metallurgically opposite of matrix. Drillbitclassifier.pdf (application/pdf Object)