City’s Annual Cost Per Inmate Is $168,000, Study Finds. New York City is an expensive place to live for just about everyone, including prisoners. 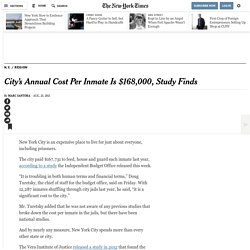 The city paid $167,731 to feed, house and guard each inmate last year, according to a study the Independent Budget Office released this week. “It is troubling in both human terms and financial terms,” Doug Turetsky, the chief of staff for the budget office, said on Friday. With 12,287 inmates shuffling through city jails last year, he said, “it is a significant cost to the city.” Mr. Turetsky added that he was not aware of any previous studies that broke down the cost per inmate in the jails, but there have been national studies. Choosing Substance Abuse Treatment Over Prison Could Save Billions: Study. Sending substance-abusing state prisoners to community-based treatment programs instead of prisons could reduce crime and save billions of dollars, a new study concludes. 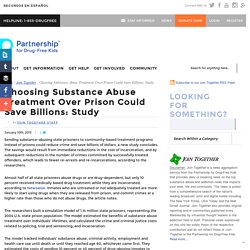 The savings would result from immediate reductions in the cost of incarceration, and by subsequent reductions in the number of crimes committed by successfully treated offenders, which leads to fewer re-arrests and re-incarcerations, according to the researchers. Almost half of all state prisoners abuse drugs or are drug-dependent, but only 10 percent received medically based drug treatment while they are incarcerated, according to Newswise. Inmates who are untreated or not adequately treated are more likely to start using drugs when they are released from prison, and commit crimes at a higher rate than those who do not abuse drugs, the article notes. 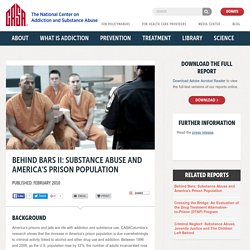 CASAColumbia’s research shows that the increase in America’s prison population is due overwhelmingly to criminal activity linked to alcohol and other drug use and addiction. Between 1996 and 2006, as the U.S. population rose by 12%, the number of adults incarcerated rose by 33% to 2.3 million inmates, and the number of inmates who were substance-involved shot up by 43% to 1.9 million inmates. This report is an exhaustive analysis of the extent to which alcohol and other drugs are implicated in the crimes and incarceration of America’s prison population. Methods. Poverty, Broken Homes, Violence: The Making of a Gang Member. How gangs impact communities' health. Driving around South Central or East Los Angeles, it's common to see young crowds gathering outside mortuaries. 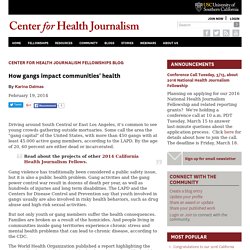 Some call the area the "gang capital" of the United States, with more than 450 gangs with at least 45.000 active gang members, according to the LAPD. By the age of 20, 60 percent are either dead or incarcerated. Read about the projects of other 2014 California Health Journalism Fellows. Gang violence has traditionally been considered a public safety issue, but it is also a public health problem. Gang activities and the gang power control war result in dozens of death per year, as well as hundreds of injuries and long term disabilities. But not only youth or gang members suffer the health consequences. The World Health Organization published a report highlighting the impact of violence and the crucial role of prevention in public health. Gang Alternatives Program (GAP) Risk Factors A recent Advancement Project report identified six major risk factors that contribute to gang involvement in urban environments: Lack of jobs for youth Poverty compounded by social isolation Domestic violence Negative peer networks Lack of parental supervision Early academic failure and lack of school attachment These risk factors increase the odds that a young person will join a gang, but is not a guarantee as we see members joining from suburbs and seemingly stable family environments. 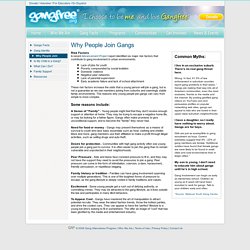 The reasons why young people join gangs can vary from simple to more complex. Some reasons include: A Sense of "Family" - Young people might feel that they don't receive enough support or attention at home. Gangs: Problems and Answers. Gangs: Problems and Answers Matt Friedrichs Poverty & Prejudice: Gang Intervention and Rehabilitation The Problem Gangs are obviously not a new phenomenon, but they are still a problem that has to be addressed. 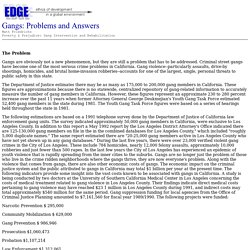 Criminal street gangs have become one of the most serious crime problems in California. Gang violence--particularly assaults, drive-by shootings, homicides, and brutal home-invasion robberies--accounts for one of the largest, single, personal threats to public safety in this state. The Department of Justice estimates there may be as many as 175,000 to 200,000 gang members in California. The following estimations are based on a 1991 telephone survey done by the Department of Justice of California law enforcement gang units. 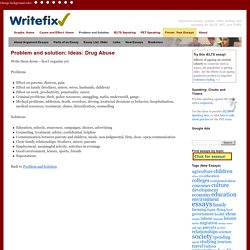 Problems. DrugFacts: Understanding Drug Abuse and Addiction. Many people do not understand why or how other people become addicted to drugs. 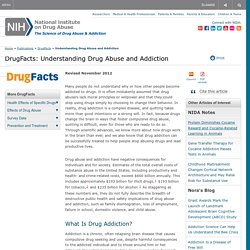 It is often mistakenly assumed that drug abusers lack moral principles or willpower and that they could stop using drugs simply by choosing to change their behavior. In reality, drug addiction is a complex disease, and quitting takes more than good intentions or a strong will. In fact, because drugs change the brain in ways that foster compulsive drug abuse, quitting is difficult, even for those who are ready to do so. Through scientific advances, we know more about how drugs work in the brain than ever, and we also know that drug addiction can be successfully treated to help people stop abusing drugs and lead productive lives. Drug abuse and addiction have negative consequences for individuals and for society. What Is Drug Addiction? Fortunately, treatments are available to help people counter addiction’s powerful disruptive effects. What Happens to Your Brain When You Take Drugs? Biology. References.