How Many Calories Do I Need To Gain Weight? You Need To Know Now - Go Lift Life. Gaining muscle requires you to be in a calorie surplus. 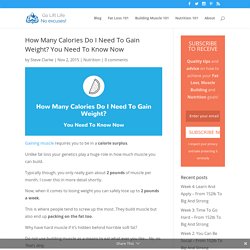 Unlike fat loss your genetics play a huge role in how much muscle you can build. Typically though, you only really gain about 2 pounds of muscle per month. I cover this in more detail shortly. Now, when it comes to losing weight you can safely lose up to 2 pounds a week. This is where people tend to screw up the most. Why have hard muscle if it’s hidden behind horrible soft fat? Do not use building muscle as a means to eat what ever you like… No, no. So how many calories do you need to gain weight? 2 pounds of weight is typically 7000 calories. 7000 calories spread over a 30 day month is about 233 calories per day. Take your TDEE and add 233 calories.

If your TDEE is 2500 calories you would need to consume 2733 calories a day to gain roughly 2 pound per month. Keep in mind that as you build muscle, your TDEE will increase. Yes, muscle burns calories. Make sure you recalculate your TDEE every couple of pounds you put on. Really? This Grocery Store From Trader Joe's Ex-President Makes Healthy Food As Cheap As Junk Food. Think of a food desert, and you might picture a neighborhood where the nearest fresh vegetable is miles away. 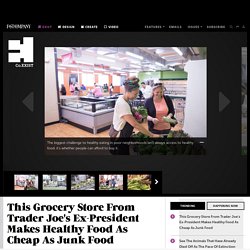 But the biggest challenge to healthy eating in poor neighborhoods isn't always access to healthy food, it's whether people can afford to buy it. One solution: A grocery store that gathers nutritious food that would otherwise be wasted and then sells it at insanely low prices. Daily Table, a nonprofit grocery that opened in Boston's Dorchester in June, was the brainchild of Doug Rauch, the former president of Trader Joe's.

After learning about food insecurity in the U.S. —and the fact that, at the same time, around 40% of the food we grow is thrown out—Rauch decided to use his industry chops to tackle both problems. "The challenge we have in America is that the food system is designed from the farm on up to create calories that are cheap and nutrients that are expensive," he says. Half of the food the store sells is prepared, a result of customers' lack of time. Huge weight loss the key to Chris Froome transformation. Data released on the double Tour de France winner Chris Froome in answer to insinuations of doping during this year’s race showed that his success can be put down to a massive loss in weight, helping to explain his improvement from also-ran to Tour de France winner. 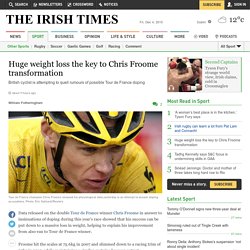 Froome hit the scales at 75.6kg in 2007 and slimmed down to a racing trim of 67kg in 2015, while maintaining a similar sustained power output. During this year’s Tour, Froome faced almost daily questioning over his ethics, while he and his Team Sky team-mates had an occasionally hostile reception from the roadside, with fans spitting at them while on one occasion urine was thrown over their Kenya-born leader. In response he and Team Sky released a limited amount of data during the race, while Froome stated he would undergo independent physiological testing to prove his probity. Froome is only one of a number of top cyclists to release data from Grand Tours this year. (Guardian Service) 10 Tips For Successful Weight Loss. Many people live in nations where the majority of people are overweight or obese. 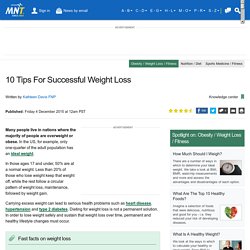 In the US, for example, only one-quarter of the adult population has an ideal weight. In those ages 17 and under, 50% are at a normal weight. Less than 20% of those who lose weight keep that weight off, while the rest follow a circular pattern of weight loss, maintenance, followed by weight gain. Carrying excess weight can lead to serious health problems such as heart disease, hypertension and type 2 diabetes. Dieting for weight loss is not a permanent solution. Fast facts on weight loss Here are some key points about weight loss. You will see introductions at the end of some sections to any recent developments that have been covered by MNT's news stories.

Losing weight Successful weight loss does not require following a specific diet such as Weight Watchers or low glycemic, but rather eating less while moving more to achieve a negative energy balance.