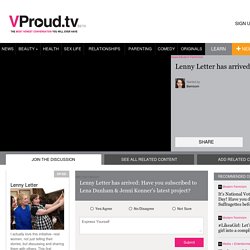 Started by Bernsom Add Your Opinion Lenny Letter has arrived: Have you subscribed to Lena Dunham & Jenni Konner's latest project? Active Participants Yes/Agree Bernsom I was blown away by the first issue. Facebook Comments Lenny Letter I actually love this initiative--real women, not just telling their stories, but discussing and sharing them with others. Galit Breen Recommended Conversations Which is your favorite Lena Dunham project? The VTeam Source: vproud.tv Counting almonds & being thin didn't help Lena Dunham's confidence or her sex life. Calm down, people: Lena Dunham is no Amanda Palmer and will pay co-performers in her book tour. #AskHerMore than what she's wearing: Did Lena Dunham mock the media's obsession with fashion at the Emmys?

Source: www.huffingtonpost.com Lena Dunham: 'Even The Most Confident Woman' Doesn't Need To Stand Next To Supermodels. About. Once upon a time I was a TRAVELER. 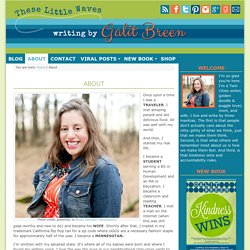 I met amazing people and ate delicious food. All was well with my world. And then, I started my real life. I became a STUDENT earning a BS in Human Development and an MA in Education. I became a classroom and reading TEACHER. I’m smitten with my adopted state. The biggest earthquake shake to my soul, however, even more than learning the difference between a casserole and a hot dish, was becoming a MOM. But there was also the attachment, the touch, the bungee cords to my heart.

And after many, many (truly, many) one-foot-in-front-of-the-other days that threaded together until they inexplicably became years, I find myself the mother of three wonderful school-aged children and one ridiculously sweet and spoiled mini golden doodle. Today, my labels are woven together tightly: WIFE. I’m a MEMOIRIST, a LONG-FORM ESSAYIST, a RESEARCH-BASED TREND PIECE WRITER, a CONTENT CURATOR, a (co)DIRECTOR, and an AUTHOR.

I’m so glad that you’re here. Woman4woman. STEPHANIE GOLDSON-RAPPAPORT is the owner of Steph Graphic Design, which specializes in printed materials for school branding and promotions. 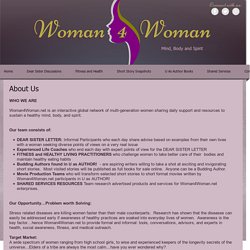 She is also a yoga teacher for senior citizens. ✦ B.A. from Queens College, City University of New York ✦ Worked at Queens College, CUNY for over 30 years, retired as Deputy Director of Creative Services ✦ Yoga Teacher Training at Long Island Yoga School Stephanie has been married for 3 years to her wonderful husband Stephen, that she met in the building where she lives, in Queens. Fitness Coach CYNTHIA SANTIAGO-BORBON is a Transformational Empowerment Coach, an Inspirational/Motivational Speaker, a Thought Leader, and a Happiness Expert who believes in helping people tap into the unlimited possibilities of life to help them realize their personal and professional excellence.

Cry It Out: Memoirs of a Stay-at-Home Dad. Mike Adamick is a stay-at-home dad, writer, and inveterate tinkerer whose work regularly appears on National Public Radio, KQED Radio and in the New York Times, the San Francisco Chronicle, McSweeney’s and Jezebel.com. 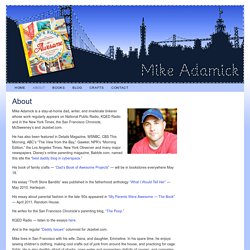 He has also been featured in Details Magazine, MSNBC, CBS This Morning, ABC’s “The View from the Bay,” Gawker, NPR’s “Morning Edition,” the Los Angeles Times, New York Observer and many major newspapers. Disney’s online parenting magazine, Babble.com, named this site the “best daddy blog in cyberspace.” His book of family crafts — “Dad’s Book of Awesome Projects” — will be in bookstores everywhere May 18. His essay “Thrift Store Bandits” was published in the fatherhood anthology “What I Would Tell Her” — May 2010, Harlequin. His essay about parental fashion in the late ’60s appeared in “My Parents Were Awesome — The Book” — April 2011, Random House.

He writes for the San Francisco Chronicle’s parenting blog, “The Poop.” KQED Radio — listen to the essays here.