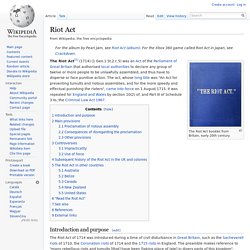 The Riot Act[1] (1714) (1 Geo.1 St.2 c.5) was an Act of the Parliament of Great Britain that authorised local authorities to declare any group of twelve or more people to be unlawfully assembled, and thus have to disperse or face punitive action. The act, whose long title was "An Act for preventing tumults and riotous assemblies, and for the more speedy and effectual punishing the rioters", came into force on 1 August 1715.

It was repealed for England and Wales by section 10(2) of, and Part III of Schedule 3 to, the Criminal Law Act 1967. Introduction and purpose[edit] The Riot Act of 1714 was introduced during a time of civil disturbance in Great Britain, such as the Sacheverell riots of 1710, the Coronation riots of 1714 and the 1715 riots in England. Main provisions[edit] The full Riot Act. Proclamation of riotous assembly[edit] The wording that had to be read out to the assembled gathering was as follows: Other provisions[edit] The Moral Foundations of Occupy Wall Street. From a rational perspective, joining a protest rally is like voting—a complete waste of time. 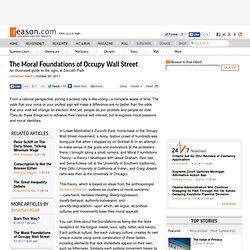 The odds that your voice or your protest sign will make a difference are no better than the odds that your vote will change an election. And yet, people do join protests and people do vote. They do these things not to advance their rational self-interest, but to express moral passions and moral identities. In Lower Manhattan's Zuccotti Park, home base of the Occupy Wall Street movement, a noisy, festive crowd of hundreds was doing just that when I stopped by on October 8. In an attempt to make sense of the goals and motivations of the protesters there, I brought along a small camera, and Moral Foundations Theory—a theory I developed with Jesse Graham, Ravi Iyer, and SenaKoleva (all at the University of Southern California), Pete Ditto (University of California at Irvine), and Craig Joseph (who was then at the University of Chicago).

Fairness/cheating. Making a Movement: Narratives and Creation Spaces. What better day than Labor Day in the US to explore movements and narratives? 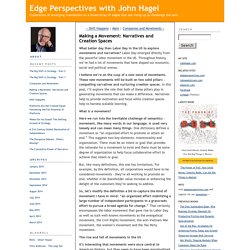 Labor Day emerged directly from the powerful labor movement in the US. Throughout history, we’ve had a lot of movements that have shaped our economic, social and political arenas. I believe we’re on the cusp of a new wave of movements. These new movements will be built on two solid pillars – compelling narratives and nurturing creation spaces. In this post, I’ll explore the role that both of these pillars play in generating movements that can make a difference. What is a movement? Here we run into the inevitable challenge of semantics – movement, like many words in our language, is used very loosely and can mean many things. But, like many definitions, this one has limitations. So, let’s modify the definition a bit to capture the kind of movement I have in mind: “an organized effort mobilizing a large number of independent participants in a grassroots effort to pursue a broad agenda for change.” What happened? How Good People & Well-Intentioned Groups Can Go Bad.

The ways and reasons how cults and noxious movements can turn relatively decent people into irrational bigots terrified and/or in loathe of outgroup members and how well-meaning movements can turn into a pits of vipers or go completely corrupt after awhile has been something I've long been fascinated with. 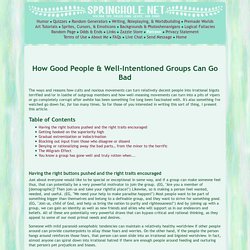 It's also something I've watched go down far, far too many times. So for those of you interested in writing this sort of thing, I present this article. Having the right buttons pushed and the right traits encouraged Just about everyone would like to be special or exceptional in some way, and if a group can make someone feel thus, that can potentially be a very powerful motivator to join the group. (EG, "Are you a member of [demographic]? Someone with mild paranoid-xenophobic tendencies can maintain a relatively healthy worldview if other people around can provide counterpoints to allay those fears and worries. Getting hooked on the superiority high 1. 2. 3. The Milgram Effect Yeah... Fomenting Rebellions in Fantasy Writing.