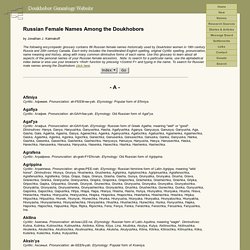 Kalmakoff The following encyclopedic glossary contains 86 Russian female names historically used by Doukhobor women in 19th century Russia and 20th century Canada. Each entry includes the transliterated English spelling, original Cyrillic spelling, pronunciation, name meaning and history, along with many common diminutive forms of each name. Use this glossary to learn about all aspects of the personal names of your Russian female ancestors. AfimiyaCyrillic: Афимия. AgafiyaCyrillic: Агафия. Agaf’yaCyrillic: Агафья. AgrafenaCyrillic: Аграфена. AgrippinaCyrillic: Агриппина. Russian Names. Russian Naming Convention / Useful Notes. Russian naming conventions (along with the conventions of the neighboring East Slavic countries and the non-Slavic peoples of the ex-USSR) and your quick and easy guide to diminutives. 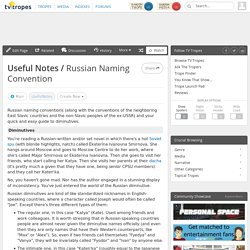 Diminutives You're reading a Russian-written and/or set novel in which there's a hot Sovietspy (with blonde highlights, natch) called Ekaterina Ivanovna Smirnova. She hangs around Moscow and goes to Moscow Centre to do her work, where she's called Major Smirnova or Ekaterina Ivanovna. Then she goes to visit her friends, who start calling her Katya. Then she visits her parents at their dacha (it's pretty much a given that they have one, being senior CPSU members) and they call her Katen'ka. Naming Conventions So we're back to our hot female spy. Surnames Russian, Ukrainian and Belorussian surnames have a variety of different types, usually tallying with ethnic origin. 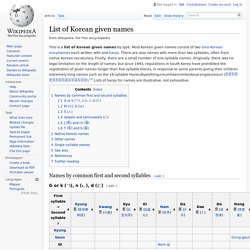 Most Korean given names consist of two Sino-Korean morphemes each written with one hanja. There are also names with more than two syllables, often from native Korean vocabulary. Finally, there are a small number of one-syllable names. Originally, there was no legal limitation on the length of names, but since 1993, regulations in South Korea have prohibited the registration of given names longer than five syllable blocks, in response to some parents giving their children extremely long names such as the 16-syllable Haneulbyeollimgureumhaennimbodasarangseureouri (하늘별님구름햇님보다사랑스러우리).[1] Lists of hanja for names are illustrative, not exhaustive. Names by common first and second syllables[edit] 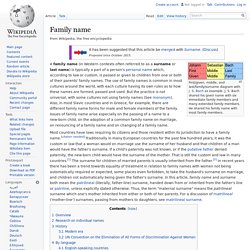 S. Bach as example. J. S. Bach shared his given name with six immediate family members and many extended family members. A family name (in Western contexts often referred to as a surname or last name) is typically a part of a person's personal name which, according to law or custom, is passed or given to children from one or both of their parents' family names. Most countries have laws requiring its citizens and those resident within its jurisdiction to have a family name. Overview[edit] In many cultures (particularly in European and European-influenced cultures in the Americas, Oceania, etc., as well as the Middle East, South Asia, and most African cultures), the family name is normally the last part of a person's personal name.

Research on individual names[edit] The study of proper names in family names is called onomastics. History[edit] In Ireland, the use of surnames has a very old history. Modern era[edit] By language[edit] Names of THE FUTURE!!! There were a couple of people on Yahoo! 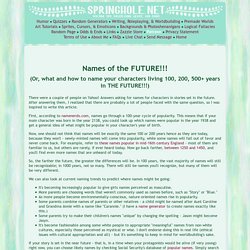 Answers asking for names for characters in stories set in the future. After answering them, I realized that there are probably a lot of people faced with the same question, so I was inspired to write this article. First, according to namenerds.com, names go through a 100-year cycle of popularity. This means that if your main character was born in the year 2138, you could look up which names were popular in the year 1938 and get a general idea of what might be popular in your character's year of birth. Now, one should not think that names will be exactly the same 100 or 200 years hence as they are today, because they won't - newly-minted names will come into popularity, while some names will fall out of favor and never come back. So, the farther the future, the greater the differences will be. We can also look at current naming trends to predict where names might be going: Dictionary of Medieval Names from European Sources.