Why Gandalf Never Married. I want to talk about magic, how magic is portrayed in fantasy, how fantasy literature has in fact contributed to a very distinct image of magic, and perhaps most importantly how the Western world in general has come to accept a very precise and extremely suspect image of magic users. 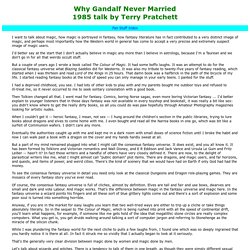 I'd better say at the start that I don't actually believe in magic any more than I believe in astrology, because I'm a Taurean and we don't go in for all that weirdo occult stuff. But a couple of years ago I wrote a book called The Colour of Magic. It had some boffo laughs. It was an attempt to do for the classical fantasy universe what Blazing Saddles did for Westerns. Gwynne & Her Drama (You cannot properly kiss a fifteen year old girl) Racism and Middle Earth. 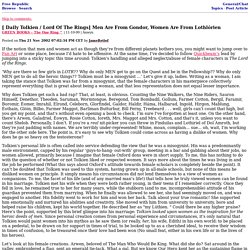 At the same time, I’ve decided to follow Quickbeam’s lead by jumping into a sticky topic this time around: Tolkien’s handling and alleged neglect/abuse of female characters in The Lord of the Rings. ‘Why are there so few girls in LOTR?? Why does Tolkien get such a bad rap? Tolkien’s personal life is often called into service defending the view that he was a misogynist. Let’s look at his female creations. Galadriel. The Lord looked at them again. ‘Nay, there was no change of counsel,’ said the Lady Galadriel, speaking for the first time. ‘You are wise and fearless and fair, Lady Galadriel,’ said Frodo. DOH! Ah. The Mockingjay’s Merry Men: Male Romance Tropes in The Hunger Games. Katniss, Hunk #1, and Hunk #2. 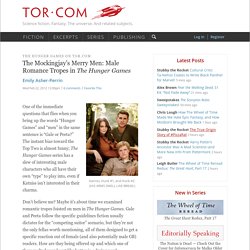 (HIS ARMS SMELL LIKE BREAD.) The Dystopia Tunnel Vision: A Counterpoint. The writing world is full of dystopias, both in- and outside of our favourite genres. 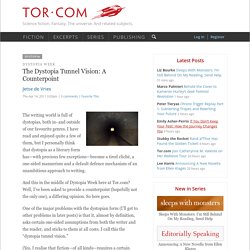 I have read and enjoyed quite a few of them, but I personally think that dystopia as a literary form has—with precious few exceptions—become a tired cliché, a one-sided mannerism and a default defence mechanism of an unambitious approach to writing. And this in the middle of Dystopia Week here at Tor.com? Well, I’ve been asked to provide a counterpoint (hopefully not the only one), a differing opinion. So here goes. One of the major problems with the dystopian form (I’ll get to other problems in later posts) is that it, almost by definition, asks certain one-sided assumptions from both the writer and the reader, and sticks to them at all costs. (Yes, I realise that fiction—of all kinds—requires a certain suspension of disbelief. In your average dystopia, a society is oppressing its citizens, or a certain part of them. Yes, we need to analyse and understand the problems that are plaguing us. 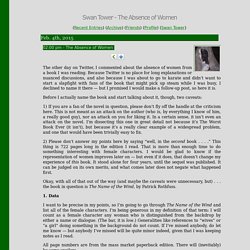 Because Twitter is no place for long explanations or nuanced discussions, and also because I was about to go to karate and didn’t want to start a slapfight with fans of the book that might pick up steam while I was busy, I declined to name it there — but I promised I would make a follow-up post, so here it is. Before I actually name the book and start talking about it, though, two caveats: Star Wars Ring Theory: The Hidden Artistry of the Prequels. Part I. 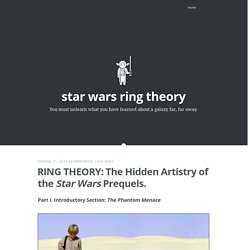 HUNGER AT ITS UGLIEST: Sociological Analysis of Suzanne Collins’ Hunger Games. Of 11 and 12 dread the reaping, as the tributes from those districts usually lose to the moreaffluent districts. 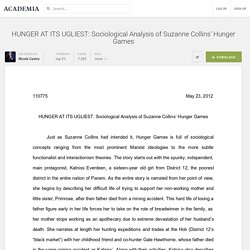 Katniss and Gale are in particular danger of being chosen in the reapingbecause they have entered their names numerous times in exchange for tesserae (a system of willingly adding an extra ballot of one’s name for the reaping in exchange for grain and oil) in order to further support their families. What Katniss does not count on,however, is for her s ister Prim’s name to be drawn when it is only her first year of being. Analysis - The Hunger Games: An Apocalyptic Future. Within the novels, there are a few reoccurring themes such as survival, independence and government control. 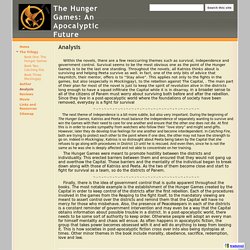 Survival seems to be the most obvious one as the point of the Hunger Games is to be the last one standing. Throughout the novels, all Katniss thinks about is surviving and helping Peeta survive as well. In fact, one of the only bits of advice that Haymitch, their mentor, offers is to “Stay alive”. The Hunger Games vs. the Reality of War. In this essay exploring the reality of war, West Point graduate and Iraq War veteran Paul K. 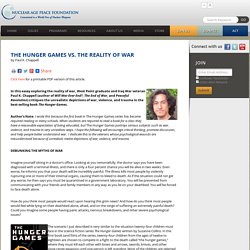 Chappell (author of Will War Ever End? , The End of War, and Peaceful Revolution) critiques the unrealistic depictions of war, violence, and trauma in the best-selling book The Hunger Games. Author’s Note: I wrote this because the first book in The Hunger Games series has become required reading in many schools. When students are required to read a book for a class they have a reasonable expectation of being educated, but The Hunger Games portrays serious subjects such as war, violence, and trauma in very unrealistic ways. I hope the following will encourage critical thinking, promote discussion, and help people better understand war. Imagine yourself sitting in a doctor’s office. How do you think most people would react upon hearing this grim news? There is a common myth in our society that human beings are naturally violent. Grossman asks us to consider two scenarios. Think about it.