Glaciers. A glacier is a mass of ice derived from snow that has accumulated and been compacted over a long period of time. 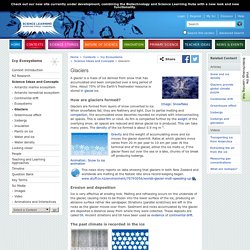 About 70% of the Earth’s freshwater resource is stored in glacial ice. How are glaciers formed? Glaciers are formed from layers of snow converted to ice. When snowflakes fall, they are feathery and light. Due to partial melting and compaction, the accumulated snow becomes rounded ice crystals with interconnecting air spaces. Gravity and the weight of accumulating snow and ice moves the glacier downhill. This news story reports on data showing that glaciers in both New Zealand and worldwide are melting at the fastest rate since record-keeping began.www.stuff.co.nz/environment/70793056/worlds-glacier-melt-speeding-up Erosion and deposition Ice is very effective at eroding rock. The past climate is recorded in the ice As ice sheets can persist for many thousands of years, the air bubbles trapped in them can provide a record of past atmospheric composition. Glacial Erosion. Glaciers not only transport material as they move, but they also sculpt and carve away the land beneath them. 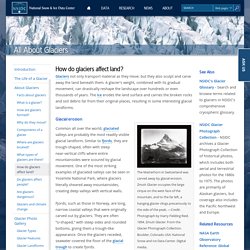 A glacier's weight, combined with its gradual movement, can drastically reshape the landscape over hundreds or even thousands of years. The ice erodes the land surface and carries the broken rocks and soil debris far from their original places, resulting in some interesting glacial landforms. The Matterhorn in Switzerland was carved away by glacial erosion. Zmutt Glacier occupies the large cirque on the west face of the mountain, and to the far left, a hanging glacier clings precariously to the side of the peak. —Credit: Photograph by Harry Fielding Reid. 1894. Glacial erosion Common all over the world, glaciated valleys are probably the most readily visible glacial landform. Fjords, such as those in Norway, are long, narrow coastal valleys that were originally carved out by glaciers. The famous Matterhorn in Switzerland displays three types of glacial erosion: Glacial landforms. Glaciers in New Zealand. Ice on the move A glacier is a huge river of ice, moving slowly down sloping terrain. 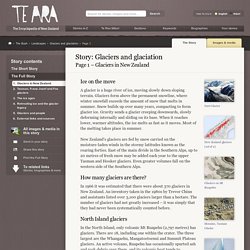 Glaciers form above the permanent snowline, where winter snowfall exceeds the amount of snow that melts in summer. Snow builds up over many years, compacting to form glacier ice. Gravity sends a glacier creeping downwards, slowly deforming internally and sliding on its base. When it reaches lower, warmer altitudes, the ice melts as fast as it moves. New Zealand’s glaciers are fed by snow carried on the moisture-laden winds in the stormy latitudes known as the roaring forties.

Glacier Formation. There are two types of places on Earth where glaciers form: at the north and south poles, whe­re it's always really cold; and at high elevations, such as large mountain ranges. 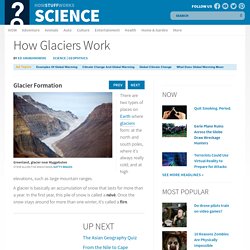 A glacier is basically an accumulation of snow that lasts for more than a year. In the first year, this pile of snow is called a névé. Once the snow stays around for more than one winter, it's called a firn. Glaciers Overview. Updated December 16, 2014. 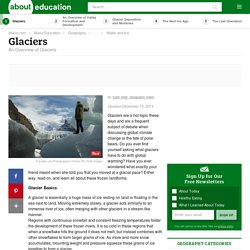 Glaciers are a hot topic these days and are a frequent subject of debate when discussing global climate change or the fate of polar bears. Do you ever find yourself asking what glaciers have to do with global warming? Have you ever wondered what exactly your friend meant when she told you that you moved at a glacial pace? Either way, read on, and learn all about these frozen landforms. Glacier Basics A glacier is essentially a huge mass of ice resting on land or floating in the sea next to land. Regions with continuous snowfall and constant freezing temperatures foster the development of these frozen rivers.

Continue reading below our video Play Video A glacier cannot form unless is it above the snowline, the lowest elevation at which snow can survive year round. As tiny air bubbles are eventually forced out by the increasing pressure the glacier appears blue, a sign of highly dense, airless ice.