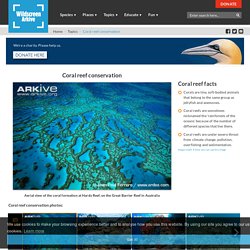 Why do Root and Flora, our Team WILD science superheroes, need help surveying coral reefs in the Chagos Archipelago? Why do scientists survey coral reefs and how do they do it? Coral reef conservation – Chagos case study The Chagos Marine Reserve is the world’s largest marine reserve, home to some of the healthiest reef ecosystems and cleanest waters in the world. The spectacularly vibrant coral reefs of Chagos are home to an astounding variety of marine life. Chagos is one of the few marine ecosystems where human activities haven’t yet had a big impact, making it important for global scientific research that aims to help our understanding of climate change, tropical marine ecosystems and the impacts of commercial fisheries.

Where is Chagos? Chagos is an archipelago of 55 tiny islands in the central Indian Ocean and spans thousands of miles of remote tropical ocean. Coral Reef Habitat. Sea grass forms broad underwater meadows in calm, shallow waters that are sheltered by the coral reef. 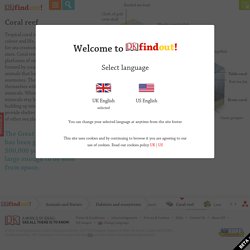 The mollusc inside this shell spears its prey with venomous darts. Shoals of brightly coloured fish dart around the reef. With so many animals competing for food, different species have adapted to eat different things. The royal angelfish mainly lives on sponges. The weedy scorpionfish lurks in ambush, ready to grab smaller fish for its prey. Table coral Table coral These broad table corals are some of the biggest corals on the reef. Corals › Like corals, red sea fans are occupied by tiny polyps that catch tiny particles of food with their tentacles. Coral Reefs. Ecokids. What is a coral reef? 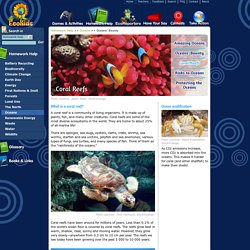 A coral reef is a community of living organisms. It is made up of plants, fish, and many other creatures. Coral reefs are some of the most diverse ecosystems in the world. They are home to about 25% of all marine life! There are sponges, sea slugs, oysters, clams, crabs, shrimp, sea worms, starfish and sea urchins, jellyfish and sea anemones; various types of fungi, sea turtles, and many species of fish. Photo courtesy: Tony Hathcock, StockXchange. Coral reefs have been around for millions of years. Photo courtesy: Adam Short, StockXchange. Coral reefs are made of tiny animals called “polyps” that stay fixed in one place and are the main structure of a reef.

Each polyp is connected by living tissue to form a community. Each polyp has a ring of tentacles shaped like a cup around a central opening. The Great Barrier Reef is the largest coral reef. Where are coral reefs located around the world? Enchanted Learning. Advertisement. 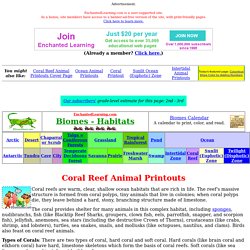 EnchantedLearning.com is a user-supported site. As a bonus, site members have access to a banner-ad-free version of the site, with print-friendly pages.Click here to learn more. (Already a member? Click here.) Corals and Coral Reefs. Corals have multiple reproductive strategies – they can be male or female or both, and can reproduce either asexually or sexually. 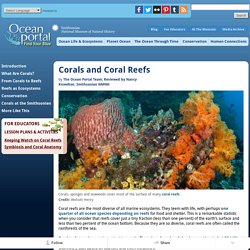 Asexual reproduction is important for increasing the size of the colony, and sexual reproduction increases genetic diversity and starts new colonies that can be far from the parents. Asexual reproduction results in polyps or colonies that are clones of each other - this can occur through either budding or fragmentation. Budding is when a coral polyp reaches a certain size and divides, producing a genetically identical new polyp. Corals do this throughout their lifetime. Sometimes a part of a colony breaks off and forms a new colony. In sexual reproduction, eggs are fertilized by sperm, usually from another colony, and develop into a free-swimming larva. Most stony corals are broadcast spawners and fertilization occurs outside the body (external fertilization). Science for Kids. The coral reef is one of the major marine biomes. 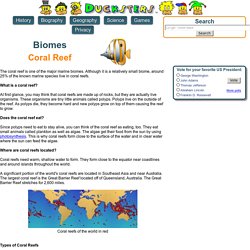 Although it is a relatively small biome, around 25% of the known marine species live in coral reefs. What is a coral reef? At first glance, you may think that coral reefs are made up of rocks, but they are actually live organisms. These organisms are tiny little animals called polyps. Polyps live on the outside of the reef. Does the coral reef eat?