Extensive Post Reveals Drills, Anomalies and Child Actors Involved With Parkland School Shooting in Florida on February 14, 2018 (N.S.F.W.) Click on the Show button at the foot of the post to reveal all images. 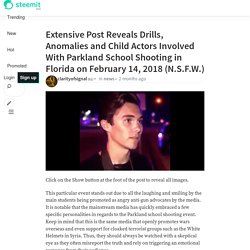 This particular event stands out due to all the laughing and smiling by the main students being promoted as angry anti-gun advocates by the media. It is notable that the mainstream media has quickly embraced a few specific personalities in regards to the Parkland school shooting event. Keep in mind that this is the same media that openly promotes wars overseas and even support for cloaked terrorist groups such as the White Helmets in Syria. Thus, they should always be watched with a skeptical eye as they often misreport the truth and rely on triggering an emotional response from their audience. Information posted online by the students at Parkland and by other individuals reveals some of these children to be involved with the crafts of acting, reporting and directing movies.

Posted for Posterity (Historical Record) due to You Tube, Facebook and Twitter scrubbing this particular video. Link to account: Image from link: Deprogramming Tips that *I* must read every few weeks…. “Reverse Blockade: emphatically insisting upon something which is the opposite of the truth blocks the average person’s mind from perceiving the truth. 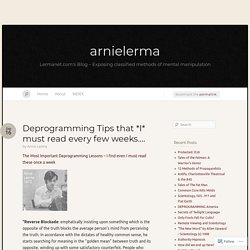 In accordance with the dictates of healthy common sense, he starts searching for meaning in the “golden mean” between truth and its opposite, winding up with some satisfactory counterfeit. People who think like this do not realize that this effect is precisely the intent of the person who subjects them to this method. ” age 104, Political Ponerology by Andrew M. Lobaczewski Only small crimes need secrecy, the big ones are best concealed by public incredulity Everything I had hoped to ‘gain’ from joining scientology and sea org, I believe I have gained, and would not have otherwise without walking into that trap.. ===”Anything said to a hypnotized subject is true for them” said hypnotist and advisor to OSS/CIA Mr.

Compare the above to L. Occupy Psychopaths 2 (OWS vs. the Pathology of the 1%) Political Ponerology Home. Psychopaths Rule Our Entire World – Politicians and Bankers are all Psychopaths. Look at their eyes and you can see something is unnatural in there! 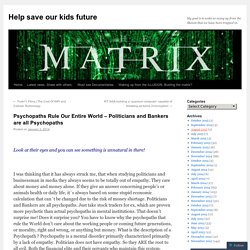 I was thinking that it has always struck me, that when studying politicians and businessman in media they always seems to be totally out of empathy. They care about money and money alone. If they give an answer concerning people’s or animals health or daily life, it`s always based on some stupid economic calculation that can`t be changed due to the risk of money shortage. Politicians and Bankers are all psychopaths.

Just take stock traders for ex, which are proven more psychotic than actual psychopaths in mental institutions. Later I will explain how psychopaths always mask themselves when seeking positions of power, it will help to remember the following: If a rational person tries to apply their logic while trying to understand the reason for an objective or act of a psychopath, they will fail. “The great masses of people will more easily fall victims to a big lie than to a small one.” – Adolph Hitler Dr. Like this: Political Ponerology: The Genesis of Evil. THE GENESIS OF EVIL 1. 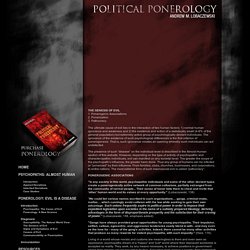 Ponerogenic Associations 2. Ponerization 3. Pathocracy The ultimate cause of evil lies in the interaction of two human factors: 1) normal human ignorance and weakness and 2) the existence and action of a statistically small (4-8% of the general population) but extremely active group of psychologically deviant individuals. The ignorance of the existence of such psychological differences is the first criterion of ponerogenesis. The presence of such “disease” on the individual level is described in the Almost Human section of this website. "In any society in this world, psychopathic individuals and some of the other deviant types create a ponerogenically active network of common collusions, partially estranged from the community of normal people...

“We could list various names ascribed to such organizations… gangs, criminal mobs, mafias… which cunningly avoid collision with the law while seeking to gain their own advantage. New members are psychologically screened. Se connecter à Facebook. Occupy Psychopaths 1 (OWS vs. the Pathology of the 1%) Political Ponerology: Andrew M. Lobaczewski.