The Federal Reserve Cartel: The Rothschild, Rockefeller and Morgan Families. Part One: The Banking Houses of Morgan and Rockefeller The Four Horsemen of Banking (Bank of America, JP Morgan Chase, Citigroup and Wells... 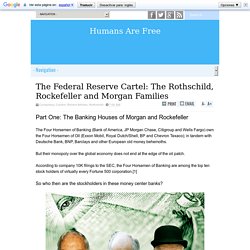 Part One: The Banking Houses of Morgan and Rockefeller The Four Horsemen of Banking (Bank of America, JP Morgan Chase, Citigroup and Wells Fargo) own the Four Horsemen of Oil (Exxon Mobil, Royal Dutch/Shell, BP and Chevron Texaco); in tandem with Deutsche Bank, BNP, Barclays and other European old money behemoths. But their monopoly over the global economy does not end at the edge of the oil patch. According to company 10K filings to the SEC, the Four Horsemen of Banking are among the top ten stock holders of virtually every Fortune 500 corporation.[1] So who then are the stockholders in these money center banks? This information is guarded much more closely. One important repository for the wealth of the global oligarchy that owns these bank holding companies is US Trust Corporation – founded in 1853 and now owned by Bank of America. J. CPA Thomas D. HOW THE WORLD REALLY WORKS - GLOBAL ELITE, RULING ELITE, GLOBAL OLIGARCHY, FINANCIAL ELITE, DYNASTIC ELITE, POWER ELITE, GLOBALISM, DEEP STATE, ROTHSCHILD, ROCKEFELLER, ZIONISM, CORPORATOCRACY, PLUTOCRACY, KLEPTOCRACY.

Rothschilds Prove that Elite Bankers Rule the World — Establish Billionaire Tax Haven INSIDE America. Reno, NV – The U.S. is quickly becoming known as the new Switzerland of international banking, due to its refusal to sign onto the new global disclosure standards, issued by the Organization for Economic Co-operation and Development (OECD), a government-funded international policy group. 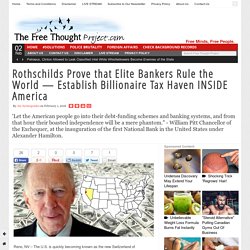 The process of moving massive amounts of international capital from typical tax havens, into the U.S., is being driven by a familiar name in the world of international finance – Rothschild & Co. Rothschild, a centuries-old European financial institution, manages the wealth of many of the world’s most wealthy families and has been instrumental in helping move the global elite’s wealth from traditional tax havens like the Bahamas, Switzerland and the British Virgin Islands to the U.S. Driving the phenomena of international capital flow into the U.S. is its refusal to agree to the new international disclosure standards that it essentially wrote. The U.S. According to a report by Bloomberg: The Rothschild Bloodline. The Rothschild Bloodline Financial Wizzards & Wealthy Cults (The numbers behind some sentences and words (...) 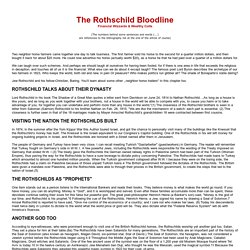 Are references to the bibliography list at the end of the article of course) Two neighbor horse farmers came together one day to talk business. The first farmer sold his horse to the second for a quarter million dollars, and then bought it back for about $20 more. He could now advertise his horse (actually worth $20), as a horse he that he had paid over a quarter of a million dollars for. We can laugh over such schemes. And perhaps we should laugh at ourselves for having been fooled, for if there is one area in life that exceeds the religious in deception, and touches all of us it is the financial.

BOMBSHELL: What Rothschild, Murdoch, Cheney, and Israel Love Most About Syria. What do Syria, New Jersey, Lord Jacob Rothschild, and former Governor of New Mexico Bill Richardson have in common? 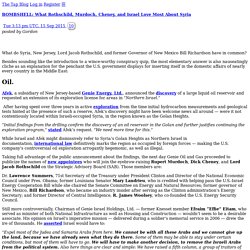 Besides sounding like the introduction to a wince-worthy conspiracy quip, the most elementary answer is also nauseatingly cliche as an explanation for the penchant the U.S. government displays for inserting itself in the domestic affairs of nearly every country in the Middle East: Afek, a subsidiary of New Jersey-based Genie Energy, Ltd., announced the discovery of a large liquid oil reservoir and requested an extension of its exploration license for areas in “Northern Israel.” After having spent over three years in active exploration from the time initial hydrocarbon measurements and geological tests hinted at the presence of such a reserve, Afek’s discovery might have been welcome news all around — were it not contentiously located within Israeli-occupied Syria, in the region known as the Golan Heights. 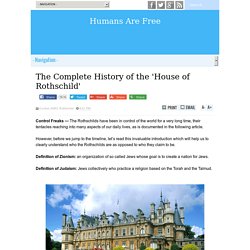 Control Freaks — The Rothschilds have been in control of the world for a very long time, their tentacles reaching into many aspects of our daily lives, as is documented in the following article. However, before we jump to the timeline, let’s read this invaluable introduction which will help us to clearly understand who the Rothschilds are as opposed to who they claim to be. Definition of Zionism: an organization of so called Jews whose goal is to create a nation for Jews. Definition of Judaism: Jews collectively who practice a religion based on the Torah and the Talmud. Khazarian AshkenazisThe Rothschilds “claim” that they are Jewish, when in fact they are Khazars. The Thirteenth Tribe85 - 90% of Jews are KhazarsYou will find that approximately 85 - 90% of people in the world today who call themselves Jews are actually Khazars, or as they like to be known, Ashkenazi Jews. 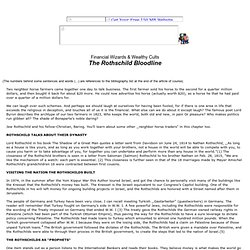 The first farmer sold his horse to the second for a quarter million dollars, and then bought it back for about $20 more. He could now advertise his horse (actually worth $20), as a horse he that he had paid over a quarter of a million dollars for. We can laugh over such schemes. Jew Rothschild and his fellow-Christian, Baring. Disappearance of the Rothschild Family (Full Documentary) How the Rothschilds rule USA ? HISTORY of the WORLD S RICHEST FAMILY. The Rothschild Bloodline.