Ultrasonic Distance Measurement Using Python – Part 1. LEDs, buzzers and switches are the most common items people attempt to interface to their Raspberry Pi’s. 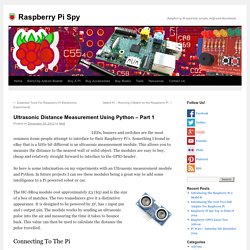 Something I found in eBay that is a little bit different is an ultrasonic measurement module. This allows you to measure the distance to the nearest wall or solid object. The modules are easy to buy, cheap and relatively straight forward to interface to the GPIO header. So here is some information on my experiments with an Ultrasonic measurement module and Python. In future projects I can see these modules being a great way to add some intelligence to a Pi powered robot or car. The HC-SR04 module cost approximately £3 ($5) and is the size of a box of matches. Ultrasonic Distance Measurement Using Python – Part 2. Following on from my Ultrasonic Distance Measurement Using Python – Part 1 article I decided to make my Python script a little bit more sophisticated. In this example the script takes three measurements and calculates the average. This is displayed and one second later it takes another average.

MCP9808 Temperature Sensor Python Library. To install and use the MCP9808 Python library follow the steps below. 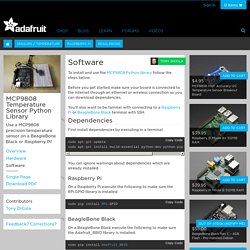 Before you get started make sure your board is connected to the internet through an ethernet or wireless connection so you can download dependencies. You'll also want to be familiar with connecting to a Raspberry Pi or BeagleBone Black terminal with SSH. First install dependencies by executing in a terminal: sudo apt-get update sudo apt-get install build-essential python-dev python-pip python-smbus git sudo apt-get updatesudo apt-get install build-essential python-dev python-pip python-smbus git You can ignore warnings about dependencies which are already installed. Python and Raspberry Pi Temperature Sensor. DeviceHive is powerful and yet easy. 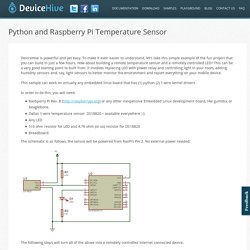 To make it even easier to understand, let’s take this simple example of the fun project that you can build in just a few hours. How about building a remote temperature sensor and a remotely controlled LED? This can be a very good starting point to built from. it involves replacing LED with power relay and controlling light in your room, adding humidity sensors and, say, light sensors to better monitor the environment and report everything on your mobile device. This sample can work on virtually any embedded linux board that has (1) python (2) 1-wire kernel drivers In order to do this, you will need: Rasbperry Pi Rev. The schematic is as follows, the sensor will be powered from RasPi’s Pin 2.

The following steps will turn all of the above into a remotely controlled Internet connected device. Configuring Raspberry Pi Installing DeviceHive on Raspberry Pi Download the latest version of DeviceHive. Access your device from Admin UI Create Client App. Raspberry Pi Temperature Server. The Raspbian Linux distribution for the Raspberry Pi includes some useful kernel drivers for accessing devices connected to the Pi’s GPIO pins. 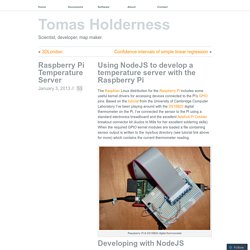 Based on the tutorial from the University of Cambridge Computer Laboratory I’ve been playing around with the DS18B20 digital thermometer on the Pi. I’ve connected the sensor to the Pi using a standard electronics breadboard and the excellent Adafruit Pi Cobbler breakout connector kit (kudos to Mills for her excellent soldering skills). When the required GPIO kernel modules are loaded a file containing sensor output is written to the /sys/bus directory (see tutorial link above for more) which contains the current thermometer reading.

Raspberry Pi & DS18B20 digital thermometer This was my first NodeJS app and I was impressed with the speed of development and the readability of documentation/examples – so much so that I managed to write the bulk of the server on my netbook during a flight from Leeds to London! DS18B20 Programmable Resolution 1-Wire Digital Thermometer. Raspberry Pi Temperature Sensor. In this tutorial, we will be building a circuit to connect a temperature sensor to our Raspberry Pi, and writing a program to read the sensor data. 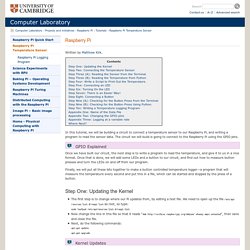 The circuit we will build is going to connect to the Raspberry Pi using the GPIO pins. GPIO stands for General Purpose Input/Output. General purpose because all they are is simple connections that can be either high or low, a binary choice. This means we can easily do things that involves binary choices, and it will still be nice and simple to understand what is going on. In this tutorial, we are going to be turning LEDs off and on, and checking whether buttons are being pressed—all very binary actions, which makes them ideally suited for GPIO pins. However, this is not all that GPIO pins can be used for. TMP006 Temperature Sensor Python Library. Are you looking for an easy way to measure the temperature of something without having to attach a sensor directly to it? 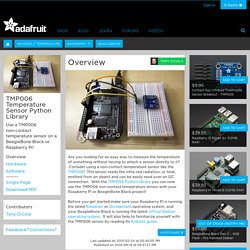 Consider using a non-contact temperature sensor like the TMP006! This sensor reads the infra-red radiation, or heat, emitted from an object and can be easily read over an I2C connection. With the TMP006 Python library you can now use the TMP006 non-contact temperature sensor with your Raspberry Pi or BeagleBone Black project! Before you get started make sure your Raspberry Pi is running the latest Raspbian or Occidentalis operating system, and your BeagleBone Black is running the latest official Debian operating system. It will also help to familiarize yourself with the TMP006 sensor by reading its Arduino guide. MAX31855 Thermocouple Sensor Python Library. MCP9808 Temperature Sensor Python Library.