Sensation and Perception. "Once I was hiking at Cape Lookout State Park in Tillamook, Oregon. 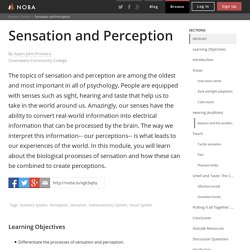 After passing through a vibrantly colored, pleasantly scented, temperate rainforest, I arrived at a cliff overlooking the Pacific Ocean. I grabbed the cold metal railing near the edge and looked out at the sea. Below me, I could see a pod of sea lions swimming in the deep blue water. Sensation and Perception. Sensation and perception are inter-related processes that are developed throughout the lifespan. 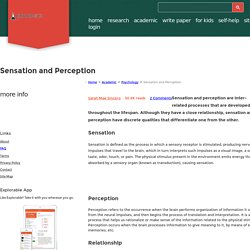 Although they have a close relationship, sensation and perception have discrete qualities that differentiate one from the other. Sensation Sensation is defined as the process in which a sensory receptor is stimulated, producing nerve impulses that travel to the brain, which in turn interprets such impulses as a visual image, a sound, taste, odor, touch, or pain. The physical stimulus present in the environment emits energy that is absorbed by a sensory organ (known as transduction), causing sensation. Sensation, Perception, & Interpretation. On Knowledge Part I Sensation, Perception, & Interpretation. 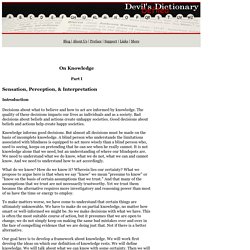 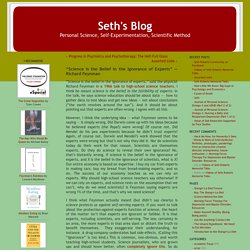 I think he meant science is the belief in the fallibility of experts. In the talk, he says science education should be about data — how to gather data to test ideas and get new ideas — not about conclusions (“the earth revolves around the sun”). And it should be about pointing out that experts are often wrong. I agree with all this. CHAPTER I. IS there any knowledge in the world which is so certain that no reasonable man could doubt it? 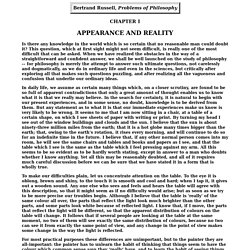 This question, which at first sight might not seem difficult, is really one of the most difficult that can be asked. When we have realized the obstacles in the way of a straightforward and confident answer, we shall be well launched on the study of philosophy -- for philosophy is merely the attempt to answer such ultimate questions, not carelessly and dogmatically, as we do in ordinary life and even in the sciences, but critically after exploring all that makes such questions puzzling, and after realizing all the vagueness and confusion that underlie our ordinary ideas.

In daily life, we assume as certain many things which, on a closer scrutiny, are found to be so full of apparent contradictions that only a great amount of thought enables us to know what it is that we really may believe. Epistemology - How can experts disagree despite having access to the same facts? - Philosophy Stack Exchange. As stated, most of your questions don't strike me as being philosophical ones. 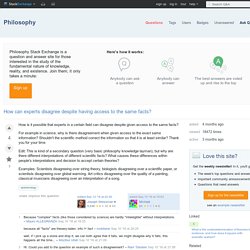 How is it possible that experts, say scientists, disagree? Well, presumably this is explained by psychological facts about the scientists in question--for example, although they're experts, they're still human beings, so fallible and influenced by irrational biases and prejudices--and facts about the complexity of the domain in question--physics is hard; it's not always straightforward what theories the experimental data support, for instance. Unthinkable: How can scientists disagree on basic ‘facts’? 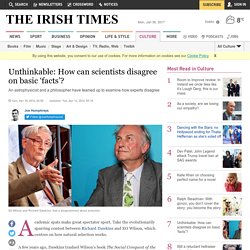 Take the evolutionarily sparring contest between Richard Dawkins and EO Wilson, which centres on how natural selection works. A few years ago, Dawkins trashed Wilson’s book The Social Conquest of the Earth, saying in a memorable review, “this is not a book to be tossed lightly aside. It should be thrown with great force.” Wilson later dismissed his Oxford counterpart as a “journalist”. Expert Disagreement - Simply Philosophy. I have already shown that experts are not special except in the areas in which they know something. 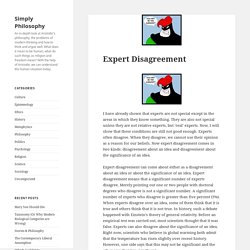 They are also not special unless they are not relative experts, but ‘real’ experts. Now, I will show that these conditions are still not good enough. Experts often disagree. Why Do Experts Disagree?