The Gypsotheca – Museo Canova. Opus 22. Canova Museum, Possagno, Italy. New wing and restoration by Carlo Stock Photo. The Eternal Beauty, according to Canova, on display in Rome - Idealwork: concrete finishes for internal and external use. The Three Graces By Antonio Canova. Share Regarded internationally as a masterpiece of neoclassical European sculpture, The Three Graces was carved in Rome by Antonio Canova (1757 – 1822) between 1815 and 1817 for an English collector. 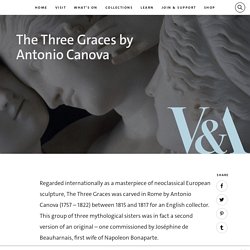 This group of three mythological sisters was in fact a second version of an original – one commissioned by Joséphine de Beauharnais, first wife of Napoleon Bonaparte. Taking its motif from ancient Greek literature, The Three Graces depicts the three daughters of Zeus, each of whom is described as being able to bestow a particular gift on humanity: (from left to right) Euphrosyne (mirth), Aglaia (elegance) and Thalia (youth and beauty). Janine Art Exhibition: An exhibition on Antonio Canova. 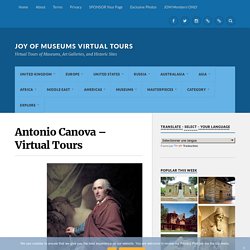 Fodor's Italy 2014 - Fodor's. How the Parthenon Lost Its Marbles. This story appears in the March/April 2017 issue of National Geographic History magazine. During the 1700s, a European Grand Tour was a rite of passage for the sons of wealthy families. Antonio Canova and the Politics of Patronage in Revolutionary and Napoleonic ... - Christopher M. S. Johns. Canova and Thorvaldsen. Venice and its lagoons. At the same time, he produced his Amore and Psyche (Musee du Louvre, Paris), which shows his growing interest in ancient sculpture, as did his next works: Monumento Emo (1792, Naval Museum, Venice); Adonis and Venus (1795, Villa Fabre, Geneva) and Ebe (1796, Berlin). 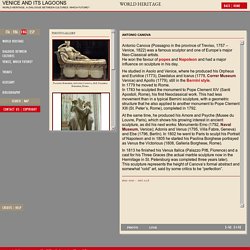 In 1802 he went to Paris to sculpt his Portrait of Napoleon and in 1805 he started his Paolina Borghese portrayed as Venus the Victorious (1808, Galleria Borghese, Rome). In 1813 he finished his Venus Italica (Palazzo Pitti, Florence) and a cast for his Three Graces (the actual marble sculpture now in the Hermitage in St. Petersburg was completed three years later).This sculpture represents the height of Canova’s formal abstract and somewhat “cold” art, said by some critics to be “perfection”. Explore The Original Canova Museum In Possagno. Here, Canova's paintings, terracotta preliminary models and drawings are displayed giving you a glimpse into his life and the painstakingly detailed method he used; translating ideas from paper to marble, passing through clay and plaster. 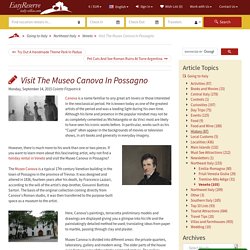 Museo Canova is divided into different areas: the private quarters, laboratory, gallery and modern wing. The older parts of the house even feature some of the artist's original furniture. The gallery, 19th-century gypsotheque, is a neoclassical barrel-vaulted space which holds most of the plaster cast models which the artist made for various works and commissions.

The modern wing was designed by Italian architect Carlo Scarpa in 1957 and was thoughtfully and carefully integrated into the older building. This section houses a variety of different objects including a collection of terracotta sketches and plaster models, some of were never actually completed and some which were lost or destroyed, including a statue of George Washington. Major exhibition tells the tale of the two great modern sculptors Antonio Canova and Bertel Thorvaldsen. MILAN.- The Gallerie d’Italia – Piazza Scala, Intesa Sanpaolo’s museum in Milan, presents the exhibition Canova and Thorvaldsen: The birth of modern sculpture, on display from 25 October 2019 to 15 March 2020, curated by Stefano Grandesso and Fernando Mazzocca. 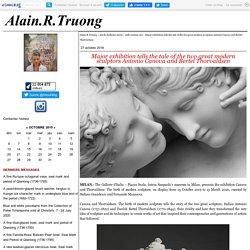 Canova and Thorvaldsen. The birth of modern sculpture tells the story of the two great sculptors; Italian Antonio Canova (1757-1822) and Danish Bertel Thorvaldsen (1770-1844); their rivalry and how they transformed the very idea of sculpture and its techniques to create works of art that inspired their contemporaries and generations of artists that followed. Antonio Canova, Le Grazie, 1812–1816, marble, 182 x 103 x 46 cm, St. Subscribe to read. The Universal Museum. From Napoleon’s Dream to Canova - La Gazzetta Italiana.

A beautiful exhibition recounting the fantastic recovery of Italy’s masterpieces from France is now open in Rome. 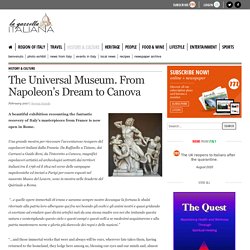 New in form and content, it is written as a correspondence and illustrated with many unpublished documents. Opus 22. Museo Canova – Possagno, Italy. Antonio Canova, known today as the greatest neoclassical artist, was the star of his time: he worked for the most eminent personalities of the 18th century and was famous worldwide for his unique, solemn and harmonious style, and his home now stands as a museum holding a complete oversight of his life and work. 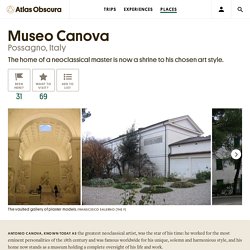 Carlo Scarpa - Stoffa. Not unlike his architecture, Carlo Scarpa was known to be understated, gracious and extremely well read. 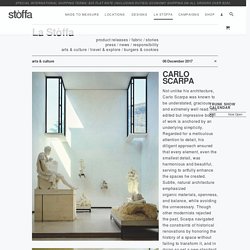 His edited but impressive body of work is anchored by an underlying simplicity. THE WEEKLY WRIGHT-UP: FRANK LLOYD WRIGHT AND CARLO SCARPA. At the beginning of the twentieth century, Frank Lloyd Wright created an entirely new organic architecture informed by elements of Nature, geometry, the Japanese print, music, engineering, a love of landscape, a healthy disdain for historicism and his own expansive vision, to create an architecture that was distinctly his own and virtually unassailable to imitators. 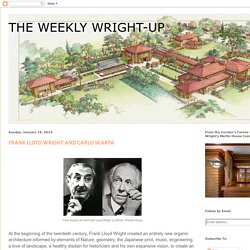 Apprentices and distant admirers tried in vain to emulate Wright’s work but invariably fell short. An exception is the Italian architect, Carlo Scarpa (1906-1978) who is the subject of a new book from Phaidon Press by Robert McCarter who wrote so enthusiastically about the Martin House (“…one of the greatest spaces ever built…”) in his Frank Lloyd Wright, Architect, in 1997. Info and Contacts on Artsupp. "A Temple for Eternity" at Museum Gipsoteca Antonio Canova - BMIAA. Progetto per il Tempio Canoviano di Possagno On 11 July 1819 Antonio Canova is in Possagno for the ceremony of laying the first stone of the Temple: the new parish church he had wanted to have erected at his own expense for his native town.

It was commissioned by Pauline Bonaparte’s husband Camillo Borghese and executed in Rome from 1805 to 1808, after she married the representative of the Borghese family. The Museum – Museo Canova.