Disappearance of the Barnacle Zone. THE BARNACLE ZONE …in which the silent fading away of a once "conspicuous" line along parts of the shore provides yet another line of evidence to support the theory of a decline in overall marine productivity, of a general shrinking of the plankton food-base that supports the entire web of marine life... by Debbie MacKenzieOctober, 2001 "Where the midlittoral zone is most clearly developed, barnacles form a dense continuous sheet on the rock; in most places, the sheet has a rather sharp upper limit, which forms one of the most distinct landmarks on the shore. 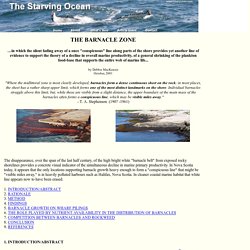 Individual barnacles straggle above this limit, but, while these are visible from a slight distance, the upper boundary of the main mass of the barnacles often forms a conspicuous line, which may be visible miles away. " - T. A. Stephenson (190? Iob.

The Sea Shore. The Sea Shore - FSC (Field Studies Council) Scroll down the page to find the kingdoms, phylum groups and species. 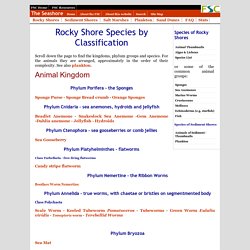 For the animals they are arranged, approximately in the order of their complexity. See also plankton. Animal Kingdom Phylum Porifera - the Sponges Sponge Purse - Sponge Bread crumb - Orange Sponges Phylum Cnidaria - sea anemones, hydroids and jellyfish. Rocky Intertidal Habitats Along The Coast of Maine. The barnacle zone, situated just below the blue green zone, is composed of a horizontal band of numerous white barnacles. 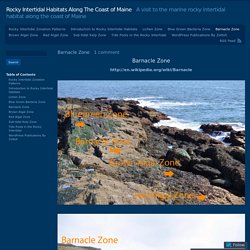 Adult acorn barnacles Semibalanus balanoides are enclosed in a calcareous shell. The volcano shaped shell consists of a basal part cemented to the rock; a wall composed of six non-movable plates and one or two pairs of movable plates at the top that allow the barnacle to seal itself from the outside environment during periods of stress or alarm.The movable plates can be separated to allow protrusion of the thoracic limbs, and the cirri, for feeding. When protruded from the shell and spread out, the cirri form a net with which the barnacle scoops water immediately above the shell opening .

When barnacles are crowded together, they often grow upward from a small base as shown below. Because the base is not as wide as those in less crowded barnacles, they are easier to dislodge.When this happens, more space becomes available for other organisms to occupy. 2. Semibalanus balanoides: INFORMATION. Ge­o­graphic Range Semi­bal­anus bal­anoides is found in the north-east At­lantic from Great Britain to south­west­ern Spain. 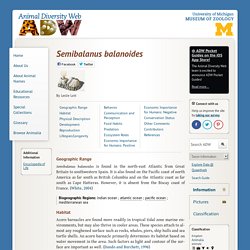 It is also found on the Pa­cific coast of north Amer­ica as far south as British Co­lum­bia and on the At­lantic coast as far south as Cape Hat­teras. How­ever, it is ab­sent from the Bis­cay coast of France. (White, 2004) Habi­tat Acorn bar­na­cles are found more read­ily in trop­i­cal tidal zone ma­rine en­vi­ron­ments, but may also thrive in cooler areas. Intertidal or littoral Phys­i­cal De­scrip­tion Semi­bal­anus bal­anoides are mod­i­fied shrimp that have six pairs of bi­ra­mous legs.

Key iden­ti­fi­ca­tion fea­tures found on this species in­clude six grey-white plates on the shell wall and a mem­bra­nous shell base. Range length 2.5 to 7.5 cm 0.98 to 2.95 in De­vel­op­ment One bar­na­cle may pro­duce up to 10,000 eggs that are stored in a sac out­side the body but within the shell cav­ity. Metamorphosis Re­pro­duc­tion Lifes­pan/Longevity Be­hav­ior Food Habits reef. Barnacles and Biofouling. Abstract Biofouling, the attachment and growth of organisms on submerged, man-made surfaces, has plagued ship operators for at least 2500 years. 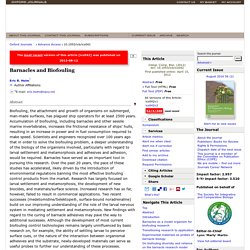 Accumulation of biofouling, including barnacles and other sessile marine invertebrates, increases the frictional resistance of ships’ hulls, resulting in an increase in power and in fuel consumption required to make speed. Scientists and engineers recognized over 100 years ago that in order to solve the biofouling problem, a deeper understanding of the biology of the organisms involved, particularly with regard to larval settlement and metamorphosis and adhesives and adhesion, would be required.

Barnacles have served as an important tool in pursuing this research. Sustainable barnacle-repelling paint could help the shipping industry and the environment - American Chemical Society. "Antifouling Activity of Celastroids Isolated from Maytenus Species, Natural and Sustainable Alternatives for Marine Coatings" Industrial & Engineering Chemistry Research Barnacles might seem like a given part of a seasoned ship’s hull, but they’re literally quite a drag and cause a ship to burn more fuel. 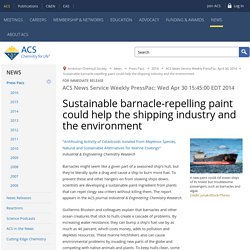 To prevent these and other hangers-on from slowing ships down, scientists are developing a sustainable paint ingredient from plants that can repel clingy sea critters without killing them. The report appears in the ACS journal Industrial & Engineering Chemistry Research. Guillermo Blustein and colleagues explain that barnacles and other ocean creatures that stick to hulls create a cascade of problems. By increasing water resistance, they can bump a ship’s fuel use by as much as 40 percent, which costs money, adds to pollution and depletes resources.

They turned to Maytenus trees, which are found worldwide. IB Environmental Systems and Societies ESS Le Rosey: Internal Assessment. Planning Marks = /6 To score a complete for each aspect you must have addressed each numbered point in your lab report. 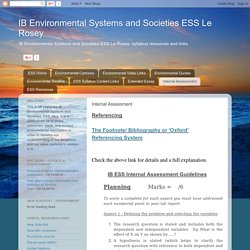 The Marine Biological Association. Common shore crabs are found on rocky shores around the British Isles. 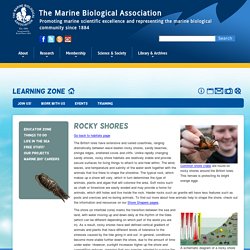 This female is protecting its bright orange eggs Go back to habitats page The British Isles have extensive and varied coastlines, ranging dramatically between wave beaten rocky shores, sandy beaches, shingle ridges, sheltered coves and cliffs. Unlike rapidly changing sandy shores, rocky shore habitats are relatively stable and provide secure surfaces for living things to attach to and hide within.