Facts, Geography, and History. Edgar Quinet and the true cost of violent revolution. The following essay is adapted from Clive James' Cultural Amnesia, a re-examination of intellectuals, artists, and thinkers who helped shape the 20th century. 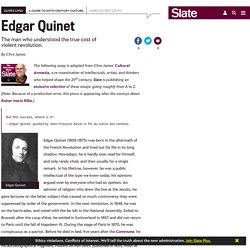 Slate is publishing an exclusive selection of these essays, going roughly from A to Z. [Note: Because of a production error, this piece is appearing after the excerpt about Rainer Maria Rilke.] But this success, where is it? —Edgar Quinet, quoted by Jean-François Revel in Fin du siècle des ombres. Edgar Quinet (1803–1875) was born in the aftermath of the French Revolution and lived out his life in its long shadow. Declaration of the Rights of Man - 1789. Declaration of the Rights of Man - 1789 Approved by the National Assembly of France, August 26, 1789 The representatives of the French people, organized as a National Assembly, believing that the ignorance, neglect, or contempt of the rights of man are the sole cause of public calamities and of the corruption of governments, have determined to set forth in a solemn declaration the natural, unalienable, and sacred rights of man, in order that this declaration, being constantly before all the members of the Social body, shall remind them continually of their rights and duties; in order that the acts of the legislative power, as well as those of the executive power, may be compared at any moment with the objects and purposes of all political institutions and may thus be more respected, and, lastly, in order that the grievances of the citizens, based hereafter upon simple and incontestable principles, shall tend to the maintenance of the constitution and redound to the happiness of all. 1. 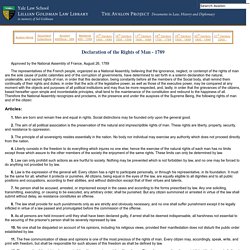 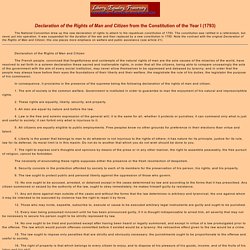 The constitution was ratified in a referendum, but never put into operation. It was suspended for the duration of the war and then replaced by a new constitution in 1795. Note the contrast with the original Declaration of the Rights of Man and Citizen; this one places more emphasis on welfare and public assistance (see article 21). The ideas of the French Revolution. The webserver at Alpha History tells us you’re using an adblocking tool, plug-in or browser extension on your computer or network. 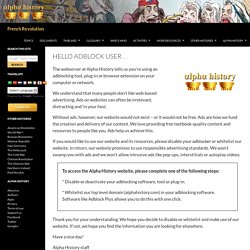 We understand that many people don’t like web-based advertising. Ads on websites can often be irrelevant, distracting and ‘in your face’. Without ads, however, our website would not exist – or it would not be free. Ads are how we fund the creation and delivery of our content. We love providing free textbook-quality content and resources to people like you. The French Revolution: Ideas and Ideologies.