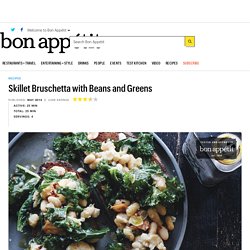 Brush bread on both sides with 4 Tbsp. oil total. Working in 2 batches, cook bread, pressing occasionally to help crisp, until golden brown, about 3 minutes per side. Season toast with salt and pepper and set aside. Increase heat to medium-high and heat remaining 2 Tbsp. oil in same skillet. Add garlic and red pepper flakes and cook, stirring, until fragrant, about 30 seconds. Lentil soup with sausage, chard and garlic. Every year around this time — well into the winter season, but long after we found it charmingly brisk, as it is when you do googly-eyed things like ice skating around a sparkling tree at the holidays — we get some sort of brittle cold snap in the weather that catches me by surprise. 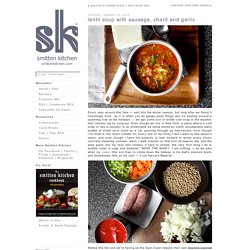 Even though we live in New York, a place where a cold snap or two a January is as predictable as being hosed by some unspeakably awful puddle of street juice slush by a car spinning through an intersection; even though I’ve lived in this exact climate for every one of my thirty-I-don’t-want-to-talk-about-it years; and even though I have the audacity to look forward to winter every sticky concrete-steaming summer, when I walk outside on that first 20-degree day and the wind gusts into my face and renders it hard to exhale, the very first thing I do is audibly holler in rage and disbelief, “WHAT THE WHAT?”

One P.S. Serves 6 Heat 1/4 cup olive oil (enough to coat bottom of pot) in a large pot on medium heat. Spaghetti with lemon and olive oil. Look, it wasn’t my finest moment but my Happy Valentine’s Day gift to my husband was an epic meltdown over book deadlines and recipe flops and the near impossibility of getting anything done with a toddler underfoot in a kitchen that doesn’t actually fit the two of us. 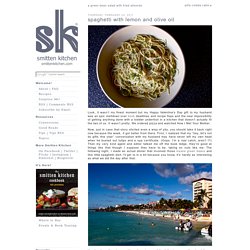 It wasn’t pretty. We ordered pizza and watched How I Met Your Mother. Jam Thumbprint Cookies Recipe : Ina Garten. Liz Lorber's Famous Hummingbird Cake Recipe. Chicken Parmesan Recipe. Foolproof Popovers Recipe : Melissa d'Arabian. Balsamic braised brussels with pancetta. It seems unfair to compare the two Brussels sprouts dishes I have made in the last couple weeks because they’re so different, about the only thing they have in common is the stand where I bought them. 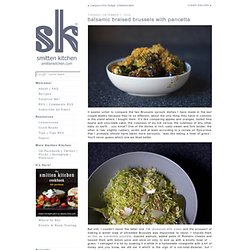 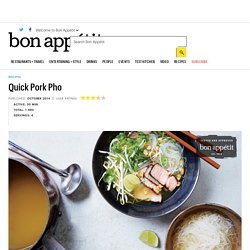 Cook onion, cut side down, until lightly charred, about 5 minutes; transfer to a plate. Add chiles (if using crushed red pepper flakes, add with fennel seeds), garlic, cinnamon stick, and star anise to skillet and cook, stirring, until fragrant, about 1 minute. Hot Pepper Noodles Recipe. Mom’s apple cake. My mother makes the best apple cake, and has for as long as I can remember. 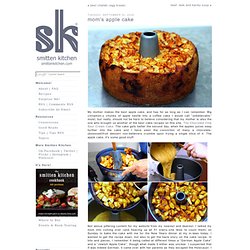 Big cinnamon-y chunks of apple nestle into a coffee cake I would call “unbelievably” moist, but really, should not be hard to believe considering that my mother is also the one who brought us another of the best cake recipes on this site, The Chocolate Chip Sour Cream Cake. The cake gets better the second day, when the apples juices seep further into the cake and I have seen the conviction of many a chocolate-obsessed/fruit dessert non-believers crumble upon trying a single slice of it. The apple cake, it’s some good stuff. Giwa. Download Menu HERE Korean Tacos: GIWA TACOS: $7.25 (2 Tacos) $3.65/each. 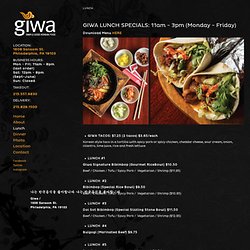 3 Packable Lunches That Will Change Your ENTIRE Day. Zach Desart Good-bye, lunch "hour"—in a recent survey, employees said their midday break lasts only about 30 minutes or less, and 29 percent admitted to working through it. 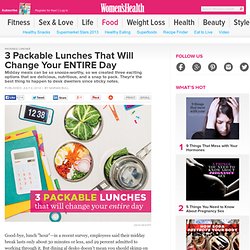 But dining al desko doesn't mean you should skimp on yummy food. Pack one of these creative, healthy, and satisfying meals—courtesy of Food52.com's "Not Sad Desk Lunch" column—and you'll be pumped up for the rest of the day. Collard Green Wraps Think of collards as carb-free tortillas. Remove their stiff backbones and they become pliable, while still holding up to travel (no tearing or sogginess) better than flimsier greens. With a paring knife, shave the thick spine from 2 collard leaves, being careful not to cut into the leaves. MAKES 1 SERVING Per serving: 320 cal, 19 g fat (6 g sat), 19 g carbs, 520 mg sodium, 8 g fiber, 21 g protein Rice Noodle Bowl If you'd rather eat takeout than brave the mystery splatters inside the shared office microwave, this hearty, best-served-cold bowl is your answer. 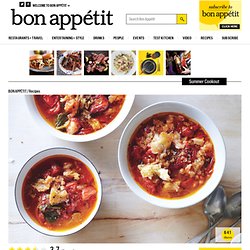 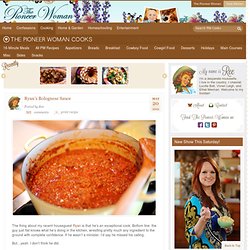 Bottom line: the guy just flat knows what he’s doing in the kitchen, wrestling pretty much any ingredient to the ground with complete confidence. If he wasn’t a minister, I’d say he missed his calling. But…yeah. I don’t think he did. The other thing about my recent houseguest Ryan is…he doesn’t so much use recipes. The night before Ryan and his family left Oklahoma (and guess what? For dinner Ryan prepared homemade pasta and his version of a Bolognese sauce. Please bear with me on the quantities of the ingredients Ryan used. Mexican Turkey Meatball Soup Recipe.

Zucchini Parmesan Crisps Recipe : Ellie Krieger. Preheat the oven to 450 degrees F. Coat a baking sheet with cooking spray.Slice the zucchini into 1/4-inch thick rounds. In a medium bowl, toss the zucchini with the oil. In a small bowl, combine the Parmesan, bread crumbs, salt, and a few turns of pepper. Dip each round into the Parmesan mixture, coating it evenly on both sides, pressing the coating on to stick, and place in a single layer on the prepared baking sheet.Bake the zucchini rounds until browned and crisp, 25 to 30 minutes.

Remove with spatula. 13 ways to eat like a Peruvian. 18 Microwave Snacks You Can Cook In A Mug. Gonna Want Seconds - Luscious Lemon Crinkle Cookies. August 26, 2011 Print This Recipe Do you love lemon flavored bake goods? I soooo do. It seems to me that some people are either chocolate lovers or lemon lovers. I happen to LOVE BOTH. Ingredients: