'Open source' place-making. How to deliver a Big Society - a place that acts as a catalyst to and inspires grassroots local activism - in the most bureaucratic, statist and controlled public space of them all: the built environment? 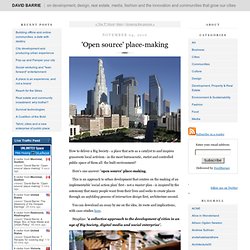 Here's one answer: 'open source' place-making. This is an approach to urban development that centres on the making of an implementable 'social action plan' first - not a master plan - is inspired by the autonomy that many people want from their lives and seeks to create places through an unfolding process of interaction design first, architecture second. You can download an essay by me on the idea, its roots and implications, with case-studies here. Information Ecology. Theory Of Evolution Of Cities Links Science, Fractal Geometry. A paper by Professor Michael Batty (UCL CASA) published in ‘Science’ and the video that accompanies this highlights a new way of looking at cities that has emerged during the last 20 years that could revolutionise planning and ultimately benefit city dwellers. 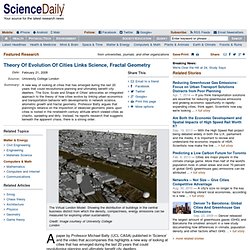 ‘The Size, Scale and Shape of Cities’ advocates an integrated approach to the theory of how cities evolve by linking urban economics and transportation behaviour with developments in network science, allometric growth and fractal geometry. Professor Batty argues that planning’s reliance on the imposition of idealised geometric plans upon cities is rooted in the nineteenth century attitude which viewed cities as chaotic, sprawling and dirty. Instead, according to Professor Batty, cities grow through allometry – growth at different rates – resulting in a change of proportion – and this changes the energy balance used to sustain them. Researchers create new Urban Network Analysis toolbox. 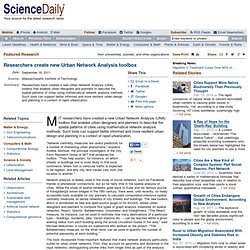 Such tools can support better informed and more resilient urban design and planning in a context of rapid urbanization. "Network centrality measures are useful predictors for a number of interesting urban phenomena," explains Andres Sevtsuk, the principal investigator of the City Form Research Group at MIT that produced the toolbox.

"They help explain, for instance, on which streets or buildings one is most likely to find local commerce, where foot or vehicular traffic is expected to be highest, and why city land values vary from one location to another. " Network analysis is widely used in the study of social networks, such as Facebook friends or phonebook connections, but so far fairly little in the spatial analysis of cities. BBC - The Code - The Wisdom of the Crowd. Building the Meta-City: Mark Rolston. Responsive Parametric Infrastructure. From Wednesday to Sunday we were in Turin to coordinate one of the group of international Smart Building Workshop.

In this post we share the proposal developed by the participants of our group: we have called the project RESPONSIVE PARAMETRIC INFRASTRUCTURE. Thank you very much to the city of Turin for inviting HDA, and thanks also to the whole organization team for the great work of coordination. Thanks also to the partners of the event and, above all, thanks to Federico Borello, Grazia Carioscia, Aurelio David, Chiara Rizzi, Giuseppe Roccasalva, Antonio Spinelli, Edoardo Trossero for working so hard for the project. Turin Smart Network - a proposal for Ambito Pollone. What is network design methodology?

Network design is something everybody will be talking about very soon. 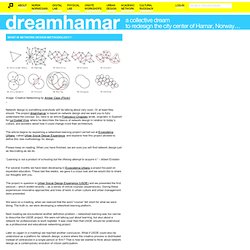 Or at least they should. The project dreamhamar is based on network design and we want you to fully understand the concept. So, here is an article Francesco Cingolani wrote, originally in Spanish for La Ciudad Viva, where he describes the basics of network design in relation to today’s culture, and wonders about how it could change more than architecture. The article begins by explaining a networked-learning project carried out at Ecosistema Urbano, called Urban Social Design Experience, and explains how this project allowed to define this new methodology for design. Please keep on reading. “Learning is not a product of schooling but the lifelong attempt to acquire it.” – Albert Einstein For several months we have been developing in Ecosistema Urbano a project focused on expanded education.

We were on a meeting, when we realized that the word “course” fell short for what we were doing. Feeling dizzy? Design Council review recommends networked system of design support. Dezeen Wire: a report commissioned by the Design Council has recommended a more localised approach to supporting design and architecture across England. 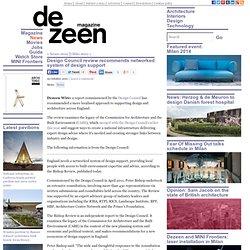 The review examines the legacy of the Commission for Architecture and the Built Environment (CABE), which merged with the Design Council earlier this year and suggest ways to create a national infrastructure delivering expert design advice where it's needed and creating stronger links between industry and design. The following information is from the Design Council: England needs a networked system of design support, providing local people with access to built environment expertise and advice, according to the Bishop Review, published today. Commissioned by the Design Council in April 2011, Peter Bishop undertook an extensive consultation, involving more than 450 representations via written submissions and roundtables held across the country. The Enabling City: Crowdfunding Urban Livability.

Crowdfunding allows people to tackle problems and endorse solutions that aren’t necessarily getting attention from markets or governments. 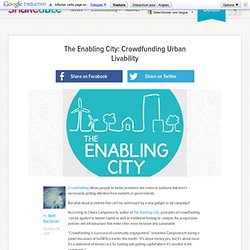 But what about problems that can't be addressed by a new gadget or ad campaign? According to Chiara Camponeschi, author of The Enabling City, principles of crowdfunding can be applied to human capital as well as traditional funding to catalyze the progressive policies and infrastructure that make cities more inclusive and sustainable. "Crowdfunding is a process of community engagement," remarked Camponeschi during a panel discussion at SxSW Eco earlier this month. "It’s about money yes, but it’s about more. It’s a statement of democracy for funding and getting capital where it’s needed in the community. " But using community support to share knowledge and create positive change is easier said than done. How do you corral raw energy into practical actions? 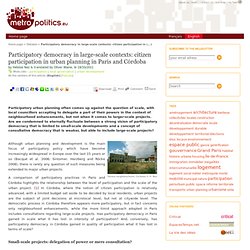 Nez Although urban planning and development is the main focus of participatory policy which have become increasingly widespread in Europe over the last 15 years or so (Bacqué et al. 2006; Sintomer, Herzberg and Röcke 2008), there is rarely any question of such measures being extended to major urban projects.