UNHCR - UNHCR: France decision to close Calais 'jungle' camp welcome; Proper care in next steps crucial. 14 October 2016 | Français | عربي Earlier this month France’s President Francois Hollande announced that the informal camp for refugees and migrants in Calais, the so-called “Jungle,” will be closed in the coming days, with the camp population to be moved to centres where better help can be provided. 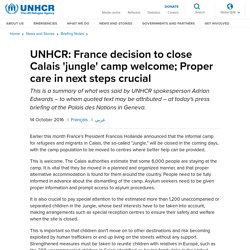 This is welcome. The Calais authorities estimate that some 6,000 people are staying at the camp. It is vital that they be moved in a planned and organized manner, and that proper alternative accommodation is found for them around the country. Q&A: what happens now to the Calais refugees? Where are they going? 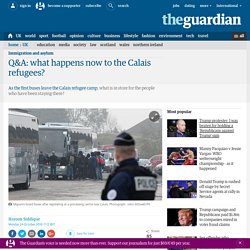 Sixty buses will move the refugees and migrants to 164 reception centres across France. The accommodation centres, which are intended to be temporary, will each hold 40 to 50 people for up to four months while their asylum cases are examined. Those who do not claim asylum will be sent back to their country of origin. Hundreds leave Calais by bus on first day of operation to clear refugee camp. Hundreds of migrants and refugees have left Calais on buses for accommodation centres elsewhere in France on the first day of an operation to clear and then demolish the refugee camp in the northern port town. 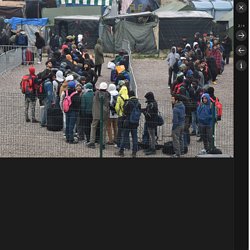 Queues of people carrying their few possessions, some in donated holdalls, had begun forming before dawn outside a warehouse where processing took place. As the gates opened people surged towards the warehouse, with no idea where they were to be taken but having been warned they must leave or risk arrest and deportation. Four hours after the operation began, about 900 people had departed Calais on 23 buses. Calais children expected in Britain ‘within days’ Only The Hardest Of Hearts Could Ignore These Syrian Kids' Hopes For Peace. Syrian teenager met by cheers in London after months in Calais limbo. Omar’s journey from Syria to Europe included a trip in a tiny boat from Turkey, a trek across Europe and months in legal limbo alone in the Calais refugee camp, waiting for his chance to cross safely to his extended family in the UK. 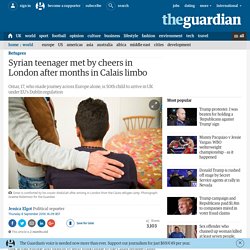 Arriving at St Pancras station in London on Thursday, with a small backpack and a shy smile, the 17-year-old was almost overwhelmed by the significance of the moment. He was greeted with cheers as he walked into the cafe where the volunteers and lawyers who had helped him through the gruelling legal process waited for him. He is the 50th child refugee to arrive in the UK under the EU’s Dublin regulation, brought over by Safe Passage, an organisation run by Citizens UK to lobby and make legal representation on refugee children’s behalf.

His cousin Abdullah, one of the first family members he has seen in almost a year, stood protectively at his shoulder. Omar’s parents and siblings are still in Syria. “We were always so worried about him. UNHCR - UNHCR: France decision to close Calais 'jungle' camp welcome; Proper care in next steps crucial. Families speak of their joy at being reunited with Calais children. The brother of a child migrant coming from Calais to the UK said it will be a "blessing" to have him back. 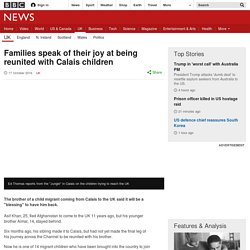 Asif Khan, 25, fled Afghanistan to come to the UK 11 years ago, but his younger brother Aimal, 14, stayed behind. Six months ago, his sibling made it to Calais, but had not yet made the final leg of his journey across the Channel to be reunited with his brother. Now he is one of 14 migrant children who have been brought into the country to join their families. Asif, who works as a chef, told the Press Association: "I really appreciate this. It was a blessing to receive him from there - I'm really happy.

"His journey was so difficult, it was by walking, by bus to Calais. New Calais census released - 761 children in Calais 'Jungle', 80% on their own - Help Refugees. Data collected by our teams on the ground reveals that at the time of census-taking there were 7,037 people living in the camp in Calais, a 15% increase in population since last month. 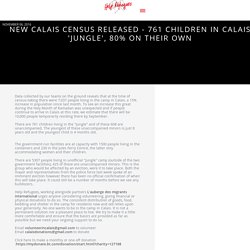 To see an increase this great during the Holy Month of Ramadan was unexpected and if people continue to arrive in Calais at this rate, we estimate that there will be 10,000 people temporarily residing there by September. There are 761 children living in the "Jungle" and of these 608 are unaccompanied. The youngest of these unaccompanied minors is just 8 years old and the youngest child is 4 months old. Log In. Photo Thousands of migrants have crowded into a makeshift camp near the port city of Calais, France, close to the entrance to the tunnel underneath the English Channel. 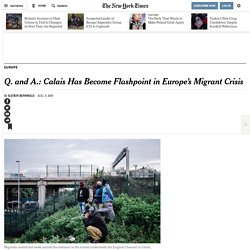 Residents of the camp have used it as a staging ground to hop onto trucks and trains bound for Britain. Migrants have used the tunnel as a transit point for years, but they are doing so in greater numbers this summer — and taking greater risks. Ten people have died trying to cross the Channel since June, according to Médecins du Monde, and the crisis has created long delays and a political uproar. Katrin Bennhold, a reporter for The New York Times based in London, recently visited Calais for an article about the crisis, and she provides answers to some of the top questions readers are asking about Calais.

3,000 migrant camp in Calais, France. Makeshift tarpaulin roofs flap in the breeze, stretched over tree branches and doing little to keep out the elements. 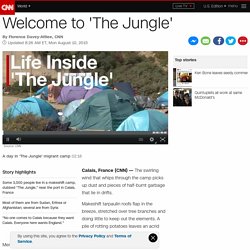 A pile of rotting potatoes leaves an acrid stench hanging in the air. Men sit on plastic chairs in the sand, huddled around a generator, all charging their mobile phones. A woeful Arabic song plays out from the tinny speakers of one man's phone. Many of these men call home and tell their families life is good in Europe, sparing their loved ones the grim truth: They all came here to reach England, but for now this is their home. There’s nascent hope in the Calais ‘Jungle’ camp. So why destroy it? A fortnight ago I returned from my second trip to the Calais “Jungle” migrant camp. 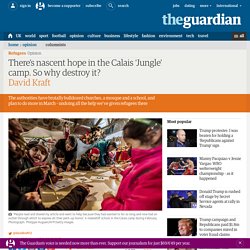 So much has happened in the couple of months between visits – but the amazing response of British volunteers, and the stark contrast with the brutality of the French state and indifference of the British government, has left a lasting impression. Conditions in Calais still fall well short of UN minimum standards, but there is a visible reduction in the extreme suffering I saw on my first trip. Because of British volunteers the kitchen we worked at is in a much better state. The pot wash area is no longer a pool of sickening mud but a floor of compressed rubble with pallets over a functioning drain; and getting water from the standpipes is now efficiently done using a bicycle that one of the refugees, Ali Waxima, converted into a wheelbarrow. There is a makeshift snug – an awning with a little stove and seating around it. They will not let you in to Dunkirk because they don’t want you to see it. 1 hour to get out: France bulldozes Calais ‘Jungle’ mosque, church & school.

French authorities have bulldozed a mosque, a church and a school, which stood in the buffer zone between the Calais ‘Jungle’ refugee camp and a public road, as residents scrambled to rescue possessions. 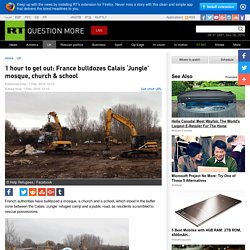 Log In. Log In Don't have an account? Sign up here » Facebook Google or Forgot password? Terms of Service Privacy Policy. Calais Jungle - Wikipedia. The Calais Jungle was a refugee and migrant encampment in the vicinity of Calais, France. Many living in this camp attempt to illegally enter the United Kingdom via the Port of Calais or the Eurotunnel by stowing away on lorries, ferries, cars, or trains traveling to the UK.[2] The camp gained global attention during the European refugee and migrant crisis when the population of the camp grew and French authorities carried out evictions. The French evacuated 6,400 migrants from the encampment in 170 buses, starting on 24 October 2016, with the intent of resettling the migrants in different regions of France.[3] On 26 October 2016, French authorities announced that the camp had been cleared.