10 Healthiest 'People Foods' You Should Be Feeding Your Dog. 1. 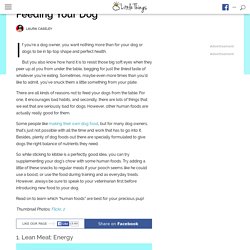 Lean Meat: Energy Tayra Lucero for LittleThings Dogs need meat, as it provides them with the bulk of their energy through its protein. Lean meats like chicken, pork, and beef are also great sources of B vitamins and amino acids, which also boost energy and metabolism. Look for cuts of meat with no visible fat when buying meat for your dog, and avoid ground meat, which usually has a higher fat content. Also beware of cooked chicken bones, as they can splinter and cause problems.

Psychology. Social Movements. Education. Why ISIS Attacked Paris: A Memo to Marco Rubio. At least Marco Rubio didn’t answer the attacks in Paris by demanding that the United States accept only Christian refugees. 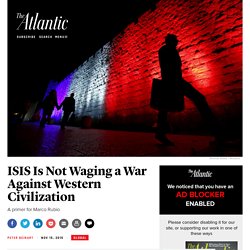 John Pilger on ISIS: Only When We See the War Criminals In Our Midst Will the Blood Begin to Dry. By John Pilger / johnpilger.com In transmitting President Richard Nixon's orders for a "massive" bombing of Cambodia in 1969, Henry Kissinger said, "Anything that flies on everything that moves". 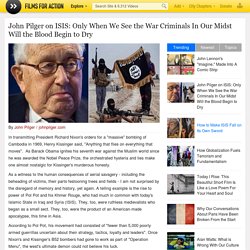 As Barack Obama ignites his seventh war against the Muslim world since he was awarded the Nobel Peace Prize, the orchestrated hysteria and lies make one almost nostalgic for Kissinger's murderous honesty. Faced With Hatred, We Must Respond With Unity  The carefreeness of an autumn evening and a faint, lingering sense of summer washed over Paris and its suburbs on the evening of Friday, November 13. 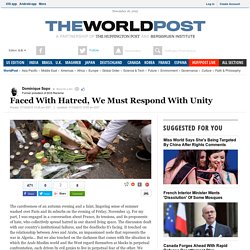 For my part, I was engaged in a conversation about France, its tensions, and its proponents of hate, who collectively spread hatred in our shared living space. The discussion dealt with our country's institutional failures, and the deadlocks it's facing. It touched on the relationship between Jews and Arabs, an impassioned node that represents the war in Algeria... But we also touched on the darkness that comes with the situation in which the Arab-Muslim world and the West regard themselves as blocks in perpetual confrontation, each driven by evil genies to live in perpetual fear of the other.

We spoke of dishonest and perverse politicians and positions, political parties more interested in capitalizing on these pains to create fractures and hatred than in building bridges. It was not a shooting. 'From another planet': Syrians react to peace plan. Syrian opposition activists have reacted to calls from world leaders for the country to hold elections within 18 months and implement an immediate ceasefire, saying that - for now - the proposed plans are nothing more than talk. 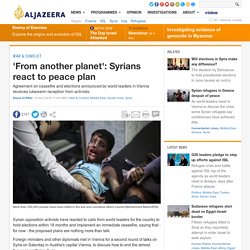 Foreign ministers and other diplomats met in Vienna for a second round of talks on Syria on Saturday in Austria's capital Vienna, to discuss how to end the almost five-year conflict in Syria. The International Syria Support Group - including the Arab League, the EU, the UN, and 17 countries, including Iran, Saudi Arabia, Russia, the US and Turkey - restated their agreement on the need to convene Syrian government and opposition representatives in formal negotiations backed by the UN. Syrian Refugee Puts Paris Attacks Into Perspective In One Simple Sentence. Fearing reprisals for the deadly attacks in Paris on Friday which are believed to have been carried out by at least one Syrian, refugees across Europe are bracing themselves for a backlash. 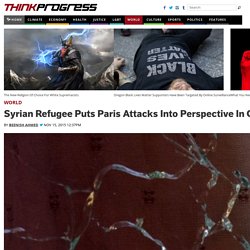 “We are with them right now, just to help them with this crisis,” a Syrian refugee who walked for 17 days before he made his way to Germany said. Ghaled, 22, who was a dentistry student in Syria before he was forced to flee the conflict there, visited the French embassy in Berlin to pay his respects to those killed in coordinated bomb and gun attacks across Paris. “What’s happening to them is happening every day in Syria, 100 times per day for five years, so we know what that means,” he said.

Such attacks have become all too common in his native country. Hillary Clinton: Blaming all of Islam for terrorist attacks is a huge strategic mistake. At Saturday night's Democratic debate, Hillary Clinton argued that it's not just wrong to broadly blame all of Islam for the acts of radical terrorists, but also potentially dangerous to America's national security interests. 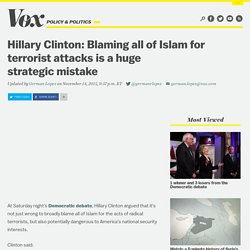 Clinton said: I think that you can talk about Islamists who clearly are also jihadists. But I think it's not particularly helpful.To make the case that Sen. Sanders was just making that I agree with, we've got to reach out to Muslim countries, we've got to have them be part of our coalition. Hezbollah chief vows to continue fight against ISIL.

Beirut, Lebanon - Hezbollah leader Hassan Nasrallah has said his group is determined to continue its fight against the Islamic State of Iraq and the Levant (ISIL) following a double suicide bombing in Beirut's southern suburbs that killed 43 people and left over 200 injured. 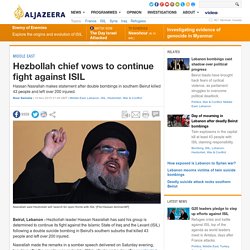 Nasrallah made the remarks in a somber speech delivered on Saturday evening, two days after the country was rocked by ISIL's attacks and a day after coordinated attacks in Paris left more than 125 dead. Focusing largely on the recent events in Lebanon, he swore Hezbollah, the Lebanese Shia group currently fighting alongside the Syrian army in Syria, will "search for open fronts with Daesh [ISIL]".

"Their goal is to pressure the resistance to withdraw from the battle against the takfiris in Syria," he said in his televised address. "[These bombings] will bring the opposite results. "It will increase our determination. Myth #1: ISIS is crazy and irrational - The 9 biggest myths about ISIS. Given that ISIS has held onto amounts of vast territory in Iraq and Syria for over a year, you might get the sense that ISIS is unstoppable. 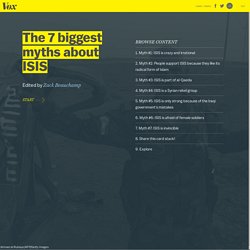 That it will not only succeed at establishing an Islamic caliphate in Iraq and Syria, but expand. Why Assad Won't Fight ISIS. The regime of Syrian President Bashar Assad has long had a pragmatic approach to the Islamic State of Iraq and Greater Syria (ISIS), says a Syrian businessman with close ties to the government. 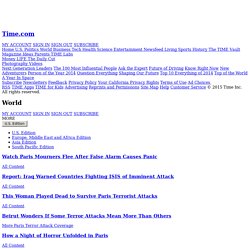 Even from the early days the regime purchased fuel from ISIS-controlled oil facilities, and it has maintained that relationship throughout the conflict. “Honestly speaking, the regime has always had dealings with ISIS, out of necessity.” The Sunni businessman is close to the regime but wants to remain anonymous for fear of repercussions from both ISIS supporters and the regime.

He trades goods all over the country so his drivers have regular interactions with ISIS supporters and members in Raqqa, the ISIS stronghold in Syria, and in ISIS-controlled areas like Dier-ezzor. You Can't Understand ISIS If You Don't Know the History of Wahhabism in Saudi Arabia  BEIRUT — The dramatic arrival of Da’ish (ISIS) on the stage of Iraq has shocked many in the West. Many have been perplexed — and horrified — by its violence and its evident magnetism for Sunni youth. But more than this, they find Saudi Arabia’s ambivalence in the face of this manifestation both troubling and inexplicable, wondering, “Don’t the Saudis understand that ISIS threatens them, too?” It appears — even now — that Saudi Arabia’s ruling elite is divided. Idiot Free Zone - Idiot Free Zone. The bloodletting suffered by France this year is horrendous and inhumane. The perpetrators should meet full judgment for their heinous acts.

France, just as other great European colonial powers and the United States, is finding that it cannot escape its history: · The U.S. is learning that the rug under which it has swept the embarrassing remnants of its history has become worn and tattered, exposing those discarded shreds. · Great Britain is finding out that an empire upon which the sun never used to set can become quite tiresome once the sun finally goes down. · It took Spain almost half a year to reach its remote colony, "Las Islas Filipinas," named for Felipe II. France recently had lost Haiti. What I Discovered From Interviewing Imprisoned ISIS Fighters. No sooner am I settled in an interviewing room in the police station of Kirkuk, Iraq, than the first prisoner I am there to see is brought in, flanked by two policemen and in handcuffs. I awkwardly rise, unsure of the etiquette involved in interviewing an ISIS fighter who is facing the death penalty.

He is small, much smaller than I, on first appearances just a boy in trouble with the police, his eyes fixed on the floor, his face a mask. We all sit on armchairs lined up against facing walls, in a room cloudy with cigarette smoke and lit by fluorescent strip lighting, a room so small that my knees almost touch the prisoner’s—but he still doesn’t look up. I have interviewed plenty of soldiers on the other side of this fight, mostly from the Kurdish forces (known as pesh merga) but also fighters in the Iraqi army (known as the Iraqi Security Forces or ISF), both Arab and Kurdish. One evening we watch a documentary on BBC Arabic profiling Brig. What The Atlantic Left Out About ISIS According To Their Own Expert. By Jack Jenkins Since Monday, much has been said in print, radio, and television about Graeme Wood’s recent front-page feature piece for The Atlantic entitled “What ISIS Really Wants.” The article, which is lengthy and highly descriptive, is essentially an exhaustive examination of the ideology that shores up the cruel vision, messages, and tactics of ISIS, the radical militant group currently terrorizing entire sections of the Middle East.

But while the article was initially met with widespread praise, it has since become the subject of criticism and even condemnation from several groups, including Muslim academics, scholars of Islamic law, Muslim leaders and high-profile political pundits. PressTV-ISIL threatens to attack France, Belgium. Takfiri ISIL terrorists have threatened to carry out fresh attacks in France and Belgium in a new video released by the militants. Published on Saturday, the nine-minute video in Arabic and French named “A Message to France” claimed that ISIL-linked elements are stationed throughout the two European countries awaiting instructions to launch attacks. The video, which pictures two French-speaking ISIL militants, came a month after deadly raids in France, including on the headquarters of Charlie Hebdo weekly and a supermarket, that killed 17 people, as well as the three gunmen involved in the assaults.

Don't let ISIL divide France. Letter from Beirut: 'It is never just a bomb' Clinton, Sanders, and O'Malley all flunked Saturday's debate on Paris and ISIS. One of the biggest challenges of preparing for a nationally televised political debate is the uncertainty. You cannot know what questions you will be asked, and so you must prepare for dozens of possible questions on a range of topics, and keep it all together in your head and ready to access at a moment's notice. More American Weapons for ISIS. How ISIS Picks Its Suicide Bombers. Who Turned My Blue State Red? Noam Chomsky: The Country Where Journalism Is Being Murdered. Turkey's Recep Tayyip Erdogan says Syrian Kurds do not want Iraq's Kurdish peshmerga fighters to help them fight Islamic State jihadists in Kobane. How U.S. Foreign Policy Created ISIS, In Just 5 Minutes. U.S. foreign policy helped create ISIS and the Syrian crisis. Former al-Qaeda mufti: I condemn ISIL attacks.

A former religious adviser to Osama bin Laden, Abu Hafs al-Mauritani has joined a chorus of Muslims in condemning the Islamic State of Iraq and the Levant (ISIL) group, denouncing its recent attacks in Paris as going against the tenets of Islam. Richard Engel Reporting - The Battle Against ISIS. How ordinary people decide to become terrorists. WATCH: Colbert Calls Out GOP's Anti-Christian Hypocrisy on Refugees. This is why they hate us: The real American history neither Ted Cruz nor the New York Times will tell you. A leading socialist explains what Bernie Sanders's socialism gets right — and wrong. Paul Krugman on What's Behind the Right's Ridiculous Tendency to Panic. Syrian refugees: Which countries welcome them. Vladimir Putin Reveals That ISIS Is Funded by 40 Countries — Including G20 Members. Terror in Paris and Beirut: An Islamic State Reading Guide.

The Illusion of Freedom. Meet This Third-Generation Farmer Who Converted His 1,400 Acres to Growing Organic Food. ISIS, Syria, and democracy: what the Arab world really thinks.