Youth Voice Plus Youth Vote. The Power of the Youth Vote. 9 Reasons We Need Young Voters More Than Ever. Young voters notoriously neglect the importance of voting, but their voice is an important one on both sides of the aisle. 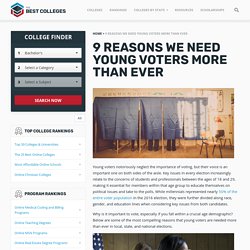 Key issues in every election increasingly relate to the concerns of students and professionals between the ages of 18 and 29, making it essential for members within that age group to educate themselves on political issues and take to the polls. While millennials represented nearly 50% of the entire voter population in the 2016 election, they were further divided along race, gender, and education lines when considering key issues from both candidates. Why is it important to vote, especially if you fall within a crucial age demographic? Below are some of the most compelling reasons that young voters are needed more than ever in local, state, and national elections. Don't Vote Case Study. 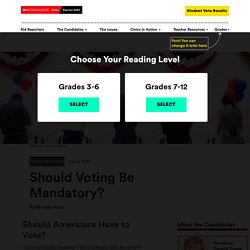 Doing so would flood the polls with millions of uninformed voters. Some Americans know a lot about politics, economics, foreign affairs, and current events. Others know hardly anything. Requiring uninformed people to vote would be like forcing them to fly an airplane or perform surgery without training. Elections have high stakes. Some people argue that voting is a civic responsibility. Furthermore, having a right to do something doesn’t mean you should be required to do it.

There are better ways to fix low voter turnout in the U.S. Professor of Strategy, Economics, Ethics, and Public Policy, Georgetown University, Washington, D.C. Debate: Should the Voting Age Be Lowered? Will younger teens ever gain the right to vote in national elections? 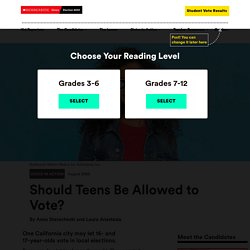 They might! Voting rights have changed throughout our country’s history. Here’s a look at some major moments. 1788-1789When George Washington is sworn in as the first U.S. president, only white men who own land or a business can vote. (New Jersey is an exception. 1870The 15th Amendment to the U.S. 1920The 19th Amendment grants suffrage to women, after almost a century of struggle to achieve it. 1924The Indian Citizenship Act declares all Native Americans to be U.S. citizens, which in turn gives them full voting rights. 1965President Lyndon B. 1971Thousands of young Americans are dying in the Vietnam War, and many Americans argue that if 18-year olds are old enough to serve in the military, then they are old enough to vote.

Myth vs. Fact: Vote-by-Mail Edition with Liza Koshy. Talking About the U.S. Midterms – Speakeasy News. If you'd like to discuss the American midterm elections with your classes, we have selected some great teaching resources. 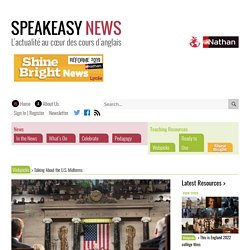 This 1'30" video from Voice of America News is short and to the point. It's usable for written comprehension (there's no voiceover or dialogue). Usable from A2. This BBC video is 2'25" and is a simple-ish guide to the mid-terms. It's usable from B1. For more advanced students, especially those studying political science, this video is an interesting analysis of why elections in the U.S.A. take so long. We've created a simple infographic summarising the main statistics. Young PeopleYoung people traditionally vote less than their elders, and organisations like Rock the Vote urge them to register to vote at every election.

Acronym, an organisation “committed to electing progressive candidates” hammered home the message that by not voting, young voters would allow older, often more conservative voters to make choices in their place with this viral video “Knock the Vote”. U.S. Youth Vote Videos – Speakeasy News. One of the big battles in the U.S. elections is getting people to vote. 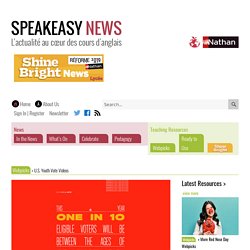 Which starts with getting them registered. These videos are a great teaching resource. In 2016, according to the U.S. Census Bureau, only about 70 per cent of citizens were registered to vote. Of those, however, about 86 per cent actually voted in the elections. Historically, young people are less likely to register than older citizens, which is why at each election, organisations like Rock the Vote campaign to get them signed up. When We All Vote is a nonpartisan organisation encouraging young voters and marginalised citizens to engage with the electoral system.

This short film would be a good way to introduce pupils to the topic from B1. When We All Vote.