Sharing-economy-final_0814.pdf. 025e8a4f0cf2ce7f65da9356.pdf. Big Bang disruption. Block chain. Blocks in the main chain (black) are the longest series of blocks that go from the genesis block (green) to the current block. 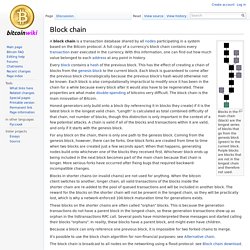 Purple blocks are blocks that are not in the longest chain and therefore not used. A block chain is a transaction database shared by all nodes participating in a system based on the Bitcoin protocol. A full copy of a currency's block chain contains every transaction ever executed in the currency. With this information, one can find out how much value belonged to each address at any point in history. Every block contains a hash of the previous block. Honest generators only build onto a block (by referencing it in blocks they create) if it is the latest block in the longest valid chain. For any block on the chain, there is only one path to the genesis block. Blocks in shorter chains (or invalid chains) are not used for anything. These blocks on the shorter chains are often called "orphan" blocks. FTF News. Awards Welcome to the FTF News Technology Innovation Awards 2014 — presented by Financial Technologies Forum and FTF News. 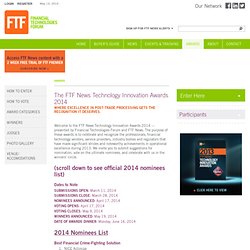 The purpose of these awards is to celebrate and recognize the professionals, financial technology vendors, service providers, industry bodies and regulators that have made significant strides and noteworthy achievements in operational excellence during 2013. We invite you to submit suggestions for nomination, vote on the ultimate nominees, and celebrate with us in the winners’ circle. (scroll down to see official 2014 nominees list) Dates to Note SUBMISSIONS OPEN: March 11, 2014 SUBMISSIONS CLOSE: March 28, 2014NOMINEES ANNOUNCED: April 17, 2014VOTING OPENS: April 17, 2014VOTING CLOSES: May 9, 2014WINNERS ANNOUNCED: May 19, 2014DATE OF AWARDS DINNER: Monday, June 16, 2014 Best Financial Crime-Fighting Solution. 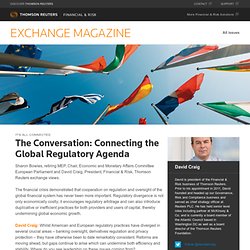 The financial crisis demonstrated that cooperation on regulation and oversight of the global financial system has never been more important. Regulatory divergence is not only economically costly; it encourages regulatory arbitrage and can also introduce duplicative or inefficient practices for both providers and users of capital, thereby undermining global economic growth.

David Craig: Whilst American and European regulatory practices have diverged in several crucial areas – banking oversight, derivatives regulation and privacy protection – they have otherwise been to date remarkably consistent. Reforms are moving ahead, but gaps continue to arise which can undermine both efficiency and stability. Where do you see leadership on these issues coming from? David: How important is convergence? Read the report: What’s next in disruptive technology and innovation in financial services - Download from Davos. Regulation and technological innovation are among the key subjects being hotly debated both on and off the official agenda at the 43rd annual World Economic Forum which kicked off in Davos this week. 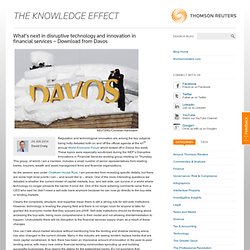 These topics were especially scrutinized during the WEF’s Disruptive Innovations in Financial Services working group meeting on Thursday. This group, of which I am a member, includes a small number of senior representatives from leading banks, insurers, wealth and asset management firms and financial organizations. As the session was under Chatham House Rule, I am prevented from revealing specific details, but there are some high level points I can – and would like to – share.

One of the more interesting questions we debated is whether the current model of capital markets, buy- and sell-side, can survive in a world where technology no longer presents the barrier it once did. Clearly the complexity, structure, and expertise mean there is still a strong role for sell-side institutions. Age of behaviour-changing innovation. 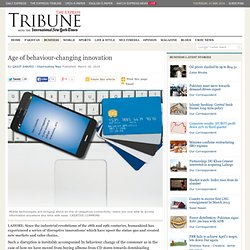 Mobile technologies are bringing about an era of ubiquitous connectivity. Users are now able to access information anywhere any time with ease. CREATIVE COMMONS. The G20 must look beyond Bretton Woods II.