Arduino Focus. CNC machine working! After nearly two weeks of messing about, trying to learn five different types of CNC controlling software, we eventually gave up trying to be different and fell into line with most other CNC users and installed MACH3. 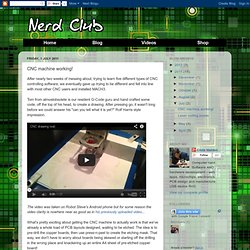 Tom from almostobsolete is our resident G-Code guru and hand crafted some code, off the top of his head, to create a drawing. After pressing go, it wasn't long before we could answer his "can you tell what it is yet? " Rolf Harris style impression. The video was taken on Robot Steve's Android phone but for some reason the video clarity is nowhere near as good as in his previously uploaded video... What's pretty exciting about getting the CNC machine to actually work is that we've already a whole load of PCB layouts designed, waiting to be etched. LED circuit board routing - Gendreau Microsystems, Inc. Fig. 1 - Automotive Taillamp PCB Fig. 2 - Electric Guitar with integrated Graphics Display More Printed Circuit Design Examples Tips / Guidelines As LED current increases, brightness increases, but only to a point. 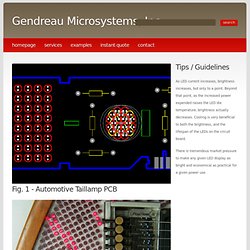 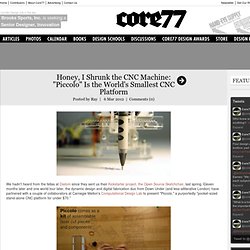 Blog.pensanyc.com/tagged/DIY. The DIWire has attracted a lot of attention and Pensa is even hoping on unveiling an improved version at the 2012 Maker Faire. 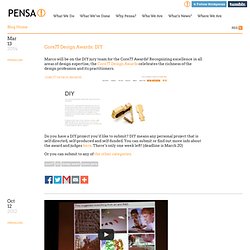 Openalia sat down with Mr. Perry for a quick discussion of the DIWire specifically, and open source hardware in general. Pensa is located in New York City, near open source pioneers like Makerbot and the Open Source Hardware Association. Creative Commons Legal Code. License 1. 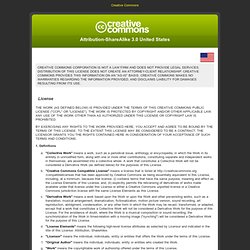 Definitions "Collective Work" means a work, such as a periodical issue, anthology or encyclopedia, in which the Work in its entirety in unmodified form, along with one or more other contributions, constituting separate and independent works in themselves, are assembled into a collective whole. Olas. Arduino Arts. My Open Source Projects. Controlling a solenoid with arduino. The Life of Kenneth: Switching 120VAC With 5V Digital Logic. After building my glorified 2 outlet power strip for my switchless desk lamp, the natural next step is to build a switched outlet that can be electronically controlled. 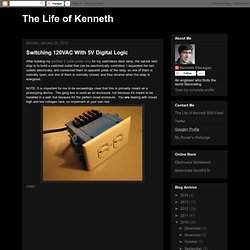 I separated the two outlets electrically, and connected them to opposite poles of the relay, so one of them is normally open, and one of them is normally closed, and they reverse when the relay is energized. NOTE: It is important for me to be exceedingly clear that this is primarily meant as a prototyping device. The gang box is used as an enclosure, not because it's meant to be installed in a wall, but because it's the perfect sized enclosure. 120VAC Relay controlled by Arduino. Arduino w/ Solid State Relay (SSR) & Parallax Motion. 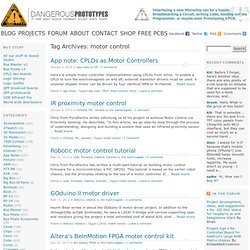 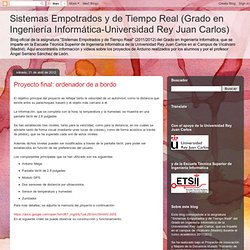 Hydraulic Arm Arduino Project. Convert industrial 3 phase motor to 1 phase for home use. ﻿THIS BLOG HAS MOVED TO YOUTUBE! 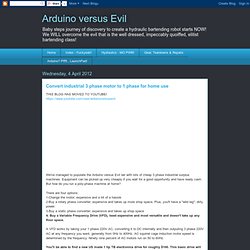 We've managed to populate the Arduino versus Evil lair with lots of cheap 3 phase industrial surplus machines. Equipment can be picked up very cheaply if you wait for a good opportunity and have ready cash. But how do you run a poly-phase machine at home? There are four options: 1-Change the motor; expensive and a bit of a hassle 2-Buy a rotary phase converter; expensive and takes up more shop space. Plus, you'll have a "wild leg"; dirty power. 3.Buy a static phase converter; expensive and takes up shop space4. Guilherme Martins : Max + Arduino + Industrial Motor. At Artica, we had a request to link MAXMSP to an industrial motor for an artistic installation witch we will speak about at another time. 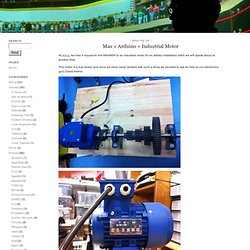 This motor is a true beast, and since we have never worked with such a thing we decided to ask for help to our electronics guru David Palma. The motor controller: David developed an electronic circuit to simulate a PWM analog output from 0 to 10v (originally it gives 0 to 5v), and another circuit to switch motors direction, both circuits were assembled on a shield and connected to the motor controller. The first circuit is a transducer: Industrial grade motor control with Arduino. How much would you think would be a good price for such a device? I don't think your price is outlandish; considering what you are supplying, the low volume of production, and the fact that you are putting a fair amount of labor just in the custom mods to the servo makes it all seem like a reasonable price per servo.

It would be nice if the cost could be brought down, but that would probably only be possible if you could scale production way up (and eliminate any manual labor). I was just thinking what it would cost to build an arm using these servos; you would need at least 5, possibly 6. Certainly cheaper than purchasing an ArmDroid (if you can find one for sale on Ebay or elsewhere - they come up every now and again, but they are considered collectors items now) or a TeachMover (nearly the same thing). Even so, you are still talking about a chunk of change. The World Famous Index of Arduino & Freeduino Knowledge. Txapu-CNC: Hardware. TxapuCNC es una fresadora casera de 2,5D.