The General Prologue - Translation. An Interview with the Woman Who Drilled a Hole in Her Head to Open Up Her Mind. Amanda Feilding trepanning herself. 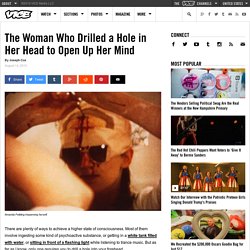 There are plenty of ways to achieve a higher state of consciousness. Most of them involve ingesting some kind of psychoactive substance, or getting in a white tank filled with water, or sitting in front of a flashing light while listening to trance music. But as far as I know, only one requires you to drill a hole into your forehead. Trepanation, a procedure where a small hole is drilled into the skull and left to heal naturally, can reportedly produce a prolonged positive effect on the trepanned individual's mood and overall state of well-being. There's little hard scientific evidence that doing this has any tangible benefits, but people have been doing it for tens of thousands of years, so there has to be a reason they keep coming back to the tried and true method of inserting pieces of metal into the front of their skulls.

Amanda in 2012. VICE: So Amanda, can you give me a short history of trepanation? What do you mean by "modern day"? 10 Bizarre Medieval Medical Practices. Creepy Medicine is one of the cornerstones of modern civilization—so much so that we take it for granted.

This isn’t quite as insane as it seems: urine is sterile when it leaves the body and may have been a healthier alternative than most water—which came with no such guarantee of cleanliness. 8 Eye Surgery (With A Needle) During the Middle Ages, cataract surgery was performed with a thick needle. Of course, eye surgery changed rapidly once Islamic medicine began to influence European practices. 4 Trepanning. Ireland’s most sinister superstition: The changeling. This appeared in The North Clare Local in April. 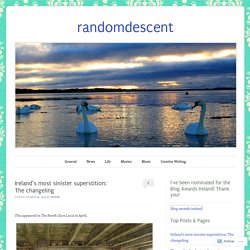 “Are you a witch, or are you a fairy? Or are you the wife of Michael Cleary?” (Irish children’s rhyme) When you scratch the surface, most human beings share the same common, primal fears. Chief among them is the loss of a loved one, especially a child. The idea of the changeling- that fairies could steal a child away, possibly forever, and leave a horribly altered substitute in its place- is one of the most sinister traditions in Irish folklore. Why would a fairy steal a human child? Perhaps the most sinister purpose for stealing away a human child comes from the Scottish tradition. Cross-breeding was another motive for kidnap. Whatever the reason, how would a parent know they had a changeling on their hands? The new replacement could be deformed, with strange features. If all this wasn’t unnerving enough, another belief states that the fairies sometimes do not leave a replacement at all. Changelings, by Alan Lee Like this: Like Loading... 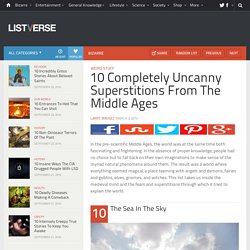 For proof, Gervase offers an episode that took place in an English village. Another tale concerns a merchant who accidentally dropped his knife while out at sea. 9 Omens Of Charlemagne’s Death The Frankish king Charlemagne was crowned Holy Roman Emperor in A.D. 800. 8 Magonia 7 Changelings. The Middle Ages: Feudal Life.