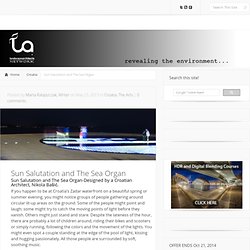 If you happen to be at Croatia’s Zadar waterfront on a beautiful spring or summer evening, you might notice groups of people gathering around circular lit-up areas on the ground. Some of the people might point and laugh; some might try to catch the moving points of light before they vanish. Others might just stand and stare. Despite the lateness of the hour, there are probably a lot of children around, riding their bikes and scooters or simply running, following the colors and the movement of the lights. You might even spot a couple standing at the edge of the pool of light, kissing and hugging passionately. What is this strange spectacle that attracts so many different people to this area, in the supposedly unattractive, dirty, and dangerous docklands? 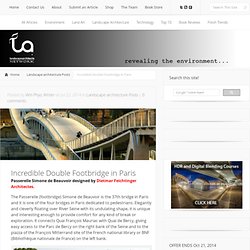 The Passerelle (footbridge) Simone de Beauvoir is the 37th bridge in Paris and it is one of the four bridges in Paris dedicated to pedestrians. Elegantly and cleverly floating over River Seine with its undulating shape, it is unique and interesting enough to provide comfort for any kind of break or exploration. Pinellas: Lens Pier Requires New Vision. Call this “not seeing eye to eye.” 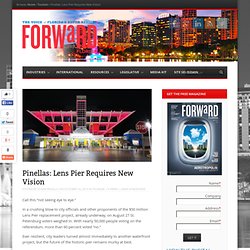 In a crushing blow to city officials and other proponents of the $50 million Lens Pier replacement project, already underway, on August 27 St. Petersburg voters weighed in. With nearly 50,000 people voting on the referendum, more than 60 percent voted “no.” Ever resilient, city leaders turned almost immediately to another waterfront project, but the future of the historic pier remains murky at best. Michael Maltzan, a world renowned architect based in Los Angeles, was hired January 20, 2012, by the St. Known simply as The Pier, it has been an endearing symbol for Tampa Bay since its debut in 1973. Concrete skatepark as part of the final redesign of the St. Pete Pier. The Design Finalists for the St. Pete Pier. 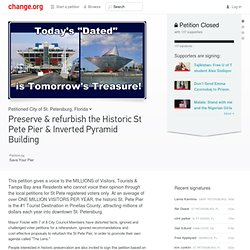 At an average of over ONE MILLION VISITORS PER YEAR, the historic St. Pete Pier is the #1 Tourist Destination in Pinellas County, attracting millions of dollars each year into downtown St. Petersburg. Mayor Foster with 7 of 8 City Council Members have distorted facts, ignored and challenged voter petitions for a referendum, ignored recommendations and cost-effective proposals to refurbish the St Pete Pier, in order to promote their own agenda called "The Lens. " People interested in historic preservation are also invited to sign this petition based on the fact that St. Cautious hope – and a new blueprint – for the St. Pete Pier - SaintPetersBlog. The future of the St. 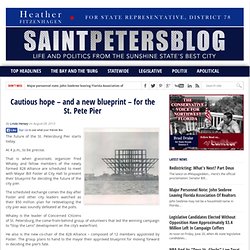 Petersburg Pier starts today. At 4 p.m., to be precise. St. Pete architect backs Pier assertion with details. ST. PETERSBURG — Local architecture firm Mesh made waves recently when it announced it could renovate the city’s inverted pyramid pier for $24 million, well below the city’s original estimate of more than $70 million. Now the firm has released a set of drawings showcasing its proposed radical makeover of the 40-year-old building that has sat empty for five months — since it was closed as a first step toward demolition. In the new design, the pier’s dated glass, steel and concrete exterior would be covered with a mesh-like material, giving it a sleek modern look but also preserving the original pyramid which still would be visible. 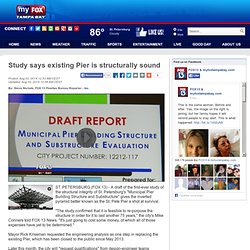 PETERSBURG (FOX 13) - A draft of the first-ever study of the structural integrity of St. Petersburg's "Municipal Pier Building Structure and Substructure" gives the inverted pyramid better known as the St. Pete Pier a shot at survival. "The study confirmed that it is feasible to re-purpose the structure in order for it to last another 75 years," the city's Mike Conners told FOX 13 News. "It's just going to cost some money, of which all of those expenses have yet to be determined. " Mayor Rick Kriseman requested the engineering analysis as one step in replacing the existing Pier, which has been closed to the public since May 2013.

Later this month, the city will "request qualifications" from design-engineer teams interested in building a new St.