The Mobile app development is a tough task, it requires good development and analytical skills. Checkout what are the major challenges that developers face while developing smartphone mobile apps. 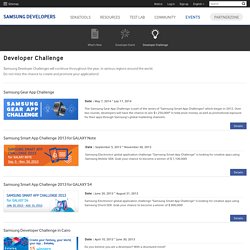 Grab your chance to become a winner of $ 1,100,000! 10 Biggest Challenges Faced by Mobile App Developers. If you are planning to develop an app, your focus should be more on ‘what not to do’ than on ‘what to do’. There are several challenges faced by developers every time they start working on a new mobile app. In this post, we highlight the 10 biggest challenges and how you can overcome them. 1. 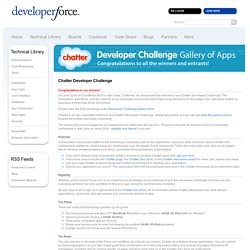 On June 22nd at Cloudforce 2010 in San Jose, California, we announced the winners in our Chatter Developer Challenge. The competition was fierce, and the maturity of our developer community meant agonizing decisions for the judges who ultimately ended up awarding a three-way tie for third place. Please view the final standings at the Developer Challenge gallery here. Thanks to all who submitted entries in the Chatter Developer Challenge. Voting has ended, but you can still view the gallery here to browse the entries and leave comments. Should You Hire an In-House Developer or Outsource Overseas?

Many entrepreneurs praise the merits of outsourcing development work overseas, while others have sworn off due to horrible experiences. 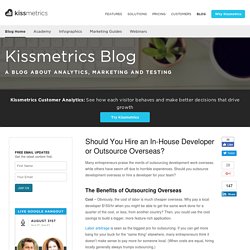 Should you outsource development overseas or hire a developer for your team? The Benefits of Outsourcing Overseas Cost – Obviously, the cost of labor is much cheaper overseas. 5 Development Mistakes That Can Destroy Your Mobile App. If you have a breakthrough idea for your business, you’ve probably considered bringing it to life by developing a mobile app. 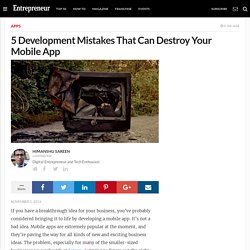 It’s not a bad idea. Mobile apps are extremely popular at the moment, and they’re paving the way for all kinds of new and exciting business ideas. The problem, especially for many of the smaller-sized businesses we work with at Icreon, is trying to figure out the right approach. Here are five helpful tips that will help any business navigate the treacherous waters of app development -- while avoiding some of the most common mistakes. Got an Idea for an App? Don’t Hire a Developer Before Reading This! Last year, I had attended my first Startup Weekend and somehow wound up in a team of four thinkers and a single doer (myself) who can’t even code apart from HTML and CSS. 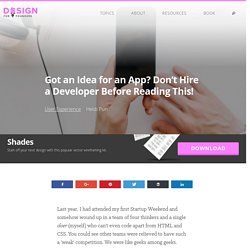 You could see other teams were relieved to have such a ‘weak’ competition. We were like geeks among geeks. How meta. And so we did surveys, wireframes, lots of thinking, and on top of all that, I created the app’s interface, logo, and a simple webpage. We called it ThoughtProvoker. Techbizgazette - 5 Things to Consider While Hiring An App Developer For Your Project.